I am using Retina Display Menu (RDM) to give me a higher resolution for my MBP, and the sweet spot that I have found is 1920x1080. 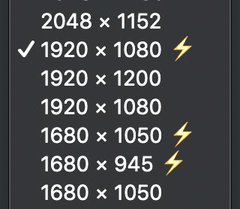 My question is why does this happen only with specific monitors, and how can I get this even without having to plug my external monitor

UPDATE 1: Could it be that the Samsung has 4K support? could it be related to that?

The lighting bolt icon indicates that it is a Retina (HiDPI) resolution.

Essentially when you're picking 1920x1080, a 1920x1080 resolution signal is generated and sent to the monitor. This is supported by both monitors.

When you pick 1920x1080 Lightning, in actual fact a 3840 x 2160 resolution signal is generated and sent to the monitor. This consists of the ordinary image, you're used to see - but magnified with a factor of 4 so it looks like 1920x1080 in physical size when rendered.

One of the notable exceptions is though that the text is actually rendered in the higher resolution with a higer font size, so it has the same physical size, but is "prettier" (i.e. less blurry/jagged).

You only get the Lightning choice with the Samsung monitor as it is the only of the two that supports a 4k (3840 x 2160) resolution.

Not the answer you're looking for? Browse other questions tagged macbook-pro display resolution .