External HDD with encrypted mac partitions is no longer recognized

I have an external disk which I use for data and a TimeMachine backup. For some reason the partition table appears to be broken and I may already have worsened the problem by trying to fix it with testdisk, where I went through EFI/GTP -> analyze -> quick search and tried to restore all partitions, which tells me the structure is bad, so I restored the first two. I'm not sure what EFI System is good for, if activated it is mounted, but that wasn't the case before the problems started. 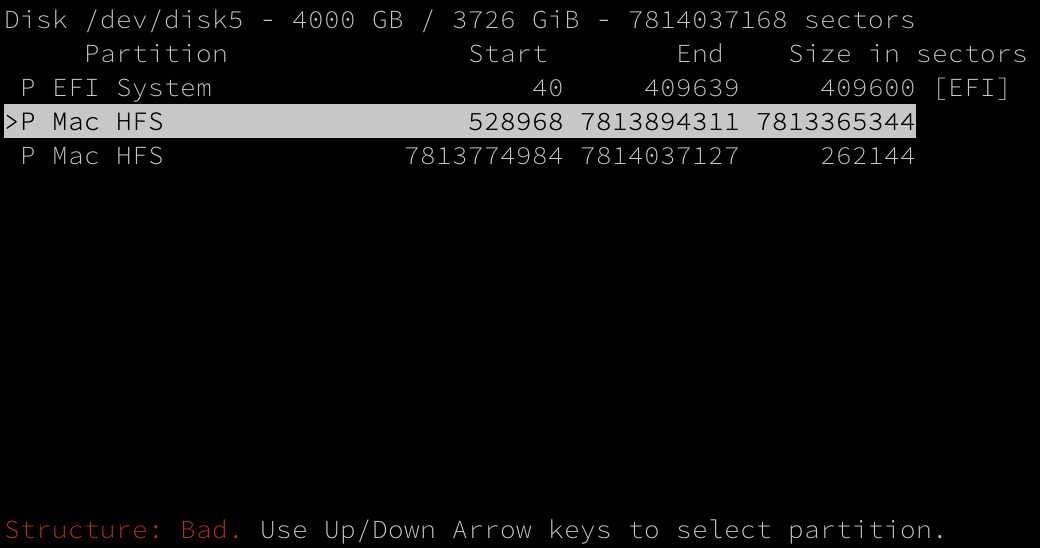 The 4TB disk is split into two parts around 2TB each, both standard encrypted macOS partitions.

I already tried to follow HFS+ Partition of Mac OSX is not recognized in Windows 10 Bootcamp but when I try to add the second partition, it says GPT partition #2 does not exist or is too big; skipping.

The same happened on another external disk. Both worked fine earlier today/a few days ago. The only change I see is that I used a different cable for one of the disks but not for the other.

So now that I have restarted my macbook, the second disk works again, whereas the first does not (presumably because I messed it up).

I would appreciate if someone can point me to a solution for this. Also I would be interested how this can happen at all.

Ok, let us step back for a second here. What OS are you running these commands from, and when was the volume originally partitioned? Although you've not mentioned it, its clear from the screenshots you've posted that (at least, as some point, depending on what you mean by "restoring" the first two), your volume was formatted into a Core Storage "Logical Volume Group", with at least one Core Storage "Logical Volume".

CoreStorage is a pretty well deprecated technology at this point. It was only really actively used for a brief window by Apple.

This more or less necessarily means that "the 4TB disk is split into two parts around 2TB each, both standard encrypted macOS partitions" isn't quite true, as there's not really such a thing as a "standard" "encrypted" macOS partition. There are [J]HFS[+] logical volumes which are encrypted via CoreStorage, although today they're quite rare (10.12+, APFS is preferred, and Time Machine on JHFS+ uses a whole different mechanism using disk images/sparse bundles). None of these, are, unfortunately, close to "standard".

My first recommendation (and its difficult to say what to do after this, without more information) at this point would to be would be to try to revert the Core Storage LVG into standard JHFS+ partitions, so they're individually recognized on in the GPT partition table. You may have to decrypt the Logical Volumes first. That would be diskutil cs revert [disk5s2 or the LVG UUID], possibly after one or more diskutil cs decryptVolume [diskXsX or LV UUID] commands.

As for restoring disks and volumes, if you wish to retain their structure, your best bet is to use asr — although of course occasionally with dd in combination with /dev/r[diskX] there can still be some milage to be had, I really don't recommend it.

Not the answer you're looking for? Browse other questions tagged macos disk-utility partition .