Why is Photos not suggesting new Faces in the People Album?

When I first began using the People / Faces feature in iOS and Mac Photos, the app automatically listed a bunch of people.

I added names for all the people I knew. I thought this was a near-complete list of all of the people in my photos, or at least the best the Photos machine learning could do in identifying faces. The album currently has 163 people. The same people are shown on iOS and Mac.

Photos organizes the images of your family and friends in your People album. You'll see a face thumbnail for each person your device recognizes.

However, I'm now noticing that no new people are ever added to the People album as "potential people" I should name.

Instead, I need to find a photo of that person, swipe up, tap their face, and add their name. After adding their name they do show up in the People album. That corresponds to this statement:

Want to see even more People in your album? Just open a photo of someone that you want to add, then swipe up to see a thumbnail of that person under People.

I used the automatic face thumbnails in the people album as a reminder/prompt to add names for the people I know.

Because no new thumbnails are being added, I am not adding names because I forget that I took photos of that person and can now add them.

The People album does still contain random people/bystanders that I do not know but were originally added to the album based on a single photo. I have not given them names. But a similar People thumbnail is not added for the new best friend of whom I've taken hundreds of photos.

Photos for Mac previously contained a "Suggested Faces" drawer at the bottom of the People album. This feature does not appear to be available in the current version of Photos for macOS. 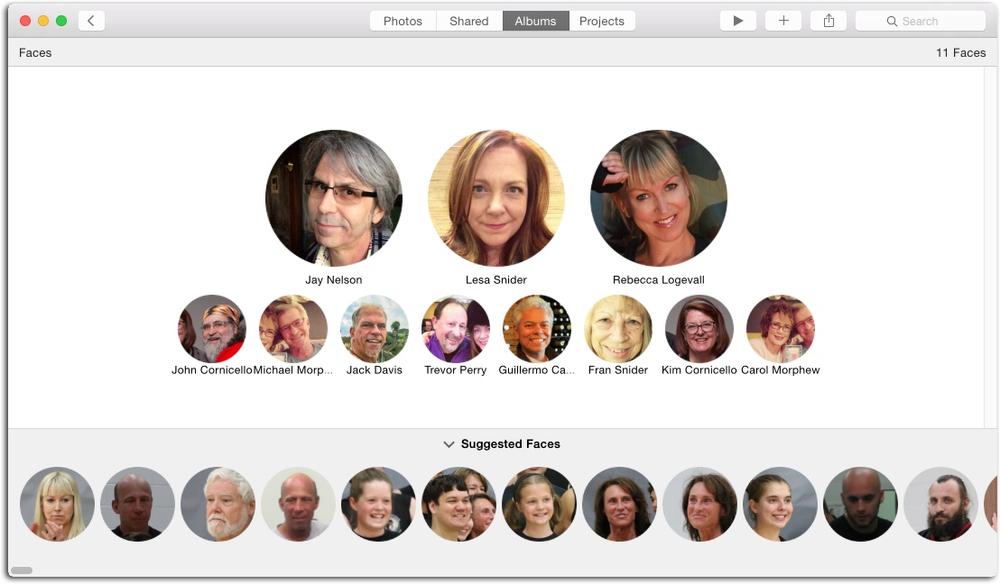 It appears that it was a bit of a meme to post funny "wrong" Suggested Faces on Twitter. The last of these were in 2016, which helps date when the feature was removed.

4
How can I show only unnamed faces in Mac photos
3
How to add People in macOS Photos?

2
Missing Faces When Creating iPhoto '11 Smart Album
0
Aperture 3 - Faces - Is there a way to change a person's name across all photos?
5
Remove Faces Permanently from Photos Library
0
How can I quickly add a photo to an album in Photos app?
3
How to add People in macOS Photos?
1
Photos “People” Function Keeps Merging People
4
How can I force the Photos app on my iPhone to recognize faces
0
How can a new iPhone know the names of people in my photos?