I've purchased an SSD drive INTEL SSDSA2CW120G3 and had a guy in Apple Reseller store clone the original HDD to the SSD.

The problem is, that the original HDD was almost dead and there were some problems while cloning. They also cloned some kind of hidden/encrypted partition, which is required for Lion.

They told me that I should use my Snow Leopard install DVD to format the main data partition and then reinstall Snow Leopard and upgrade to Lion from App Store.

They also said something about having problems with cloning the hidden partition.

Is there any safe way that I can check, if I'm going to be able to install Snow Leopard and then safely upgrade to Lion after I format the SSD? Or even better, is there any way to install Lion directly?

edit: looking at the restore partition, it looks like it's empty 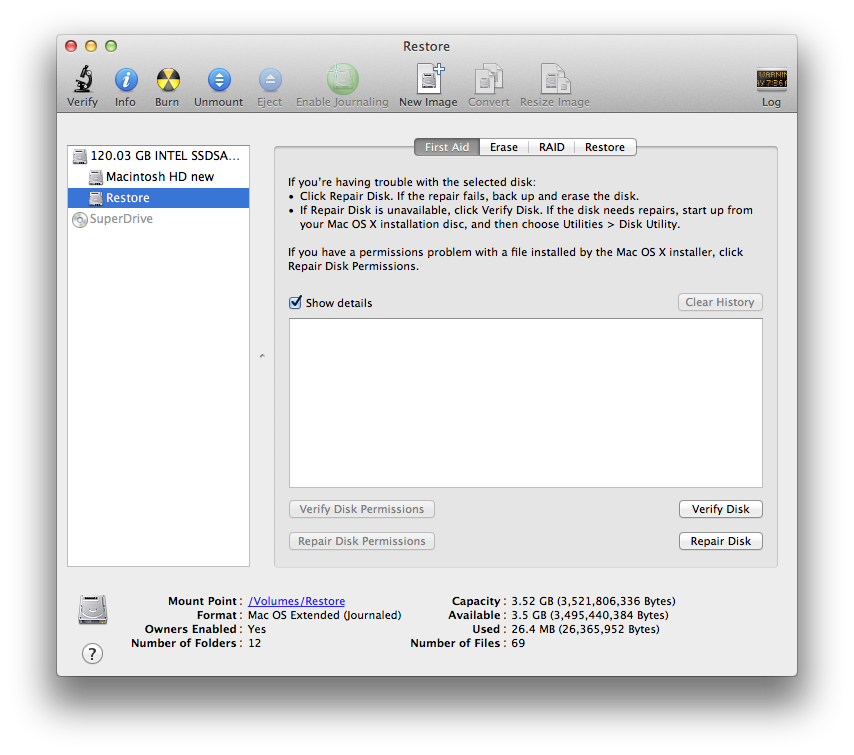 The Recovery HD partition is not meant to be clone-able. They clearly failed and had no idea what they were doing when it came to that stage.

Re-installing Snow Leopard from a Lion install will not work, the user account details are slightly different between Snow Leopard and Lion (found that out the hard way), this would essentially render your user account useless.

P.S. I'd advise you don't go back to that reseller, they have no clue what they're doing.

P.P.S. iampearce's comment about the drive being physically in the machine before installing Lion is irrelevant, and incorrect. The files that are used during the installer are loaded according to the machine hardware you boot from.

Use this - it runs you through how to use it. You just need to download the app from the app store and follow the instructions.

Not the answer you're looking for? Browse other questions tagged macos snow-leopard install ssd .

4
Lion ISO size VS. Snow Leopard
0
Upgrading to Lion from Snow Leopard
1
Install Lion on new SSD on MBP 2009
2
Can I install Snow Leopard over a network?
1
Can't upgrade to Lion with error "can't be installed because a recovery system can't be created"
4
Hard Disk Transfer to SSD - 2007 MacBook and Lion
0
Fresh install or Cloning when migrating from HDD to smaller SSD (considering fragmentation, mostly)?
3
Sold my MacBook Pro Lion, how to reset OS installation?
2
Are there any downsides to cloning an HDD to an SSD?
1
Reboot and Reinstall OSx Lion with Snow Leopard currently installed on my Mac