Create User via Terminal with Bash in macOS Mojave

In general, you can create a user via Terminal in macOS using Apple's documented method. However, macOS Mojave introduced various security mechanisms that cause scripts to fail when changing user account settings like UID and NFSHomeDirectory, both of which I need to change for how I use these accounts. So, the script to create a new home folder now fails, unless I have a GUI to approve the change being made. Is there any way to create a user and modify the settings without disabling any security settings? There's nothing in the TCC database I can find to allow this script to run, and it's not feasible to run this on every machine I need it deployed to.

They both give a warning box: 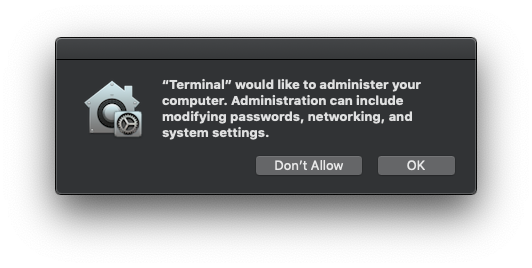 I also tried the script linked on this question, and the exact Terminal commands in the Apple article mentioned earlier.

1
Terminal and bash can't start with libiconv error
1
Terminal bash commands stopped working
3
Characters do not echo in OS X terminal unless I hit the delete key
0
Gather information via Terminal
2
How can I create a new user through terminal macOS 10.14
0
Can't store multiple arguments with read -p in macOS terminal using bash
2
How to change the password of a local admin user that has never being logged in using a bash script
0
Can't launch Finder window from terminal on Mojave