My Books app in my ipad pro deletes/disappears my pdfs. I am on IOS 12.2 and it is was updated a couple weeks back without issue

What did happen is that I was reading one of the PDFs and the next time I opened it, the Book app was frozen. So, I shut off the ipad. When I turned it back on, I realized that I went from 130 PDFs to 4 losing nearly everything. Luckily, about 105 of the PDFs were on my iphone. So, I quickly bought more iCloud storage and transferred that there and then those PDFs were now back to my ipad, but I did lose 25 or so documents. I would really like to get these back and I do not know which ones I lost.

I tried all kinds of remedies I found on the web - including one that worked after an IOS update that zapped my PDFs a couple months back (no IOS update this time):

There have been a few other ideas tossed around, like deleting the Books app and reinstalling it - that failed too.

I am pretty bearish on a solution as many people appear to have this problem and have posted about it with some solutions that worked for them, but none of which worke for me on this cut.

Not sure why such a monumental bug is so difficult for Apple to handle.

PS: Another thing worth mentioning is that when I re-downloaded one of the missing PDFs (Actually, the one that was frozen), the document ended up in the correct folder in my collection and when I opened it, it was on the page I was last looking at - so Book still has some kind of memory of the PDF - I just hope that it can eventually make all the missing PDFs - reappear. It is very scary to me that I cannot trust the Book app - or even iCloud - after all, the 105 documents that became 95 today were theoretically on iCloud!

I've had the same problem. One of my friends gave me a slew of books in ePub and PDF format. Most of them are crap, but a few I really hoped to read. The only thing that has saved me is that I have iCloud backups of my iPad Pro.

I've also been able to recover a few by syncing with my Mac, then opening Books and going to Collections->PDFs. Then I had to manually get them back onto my iPad Pro. 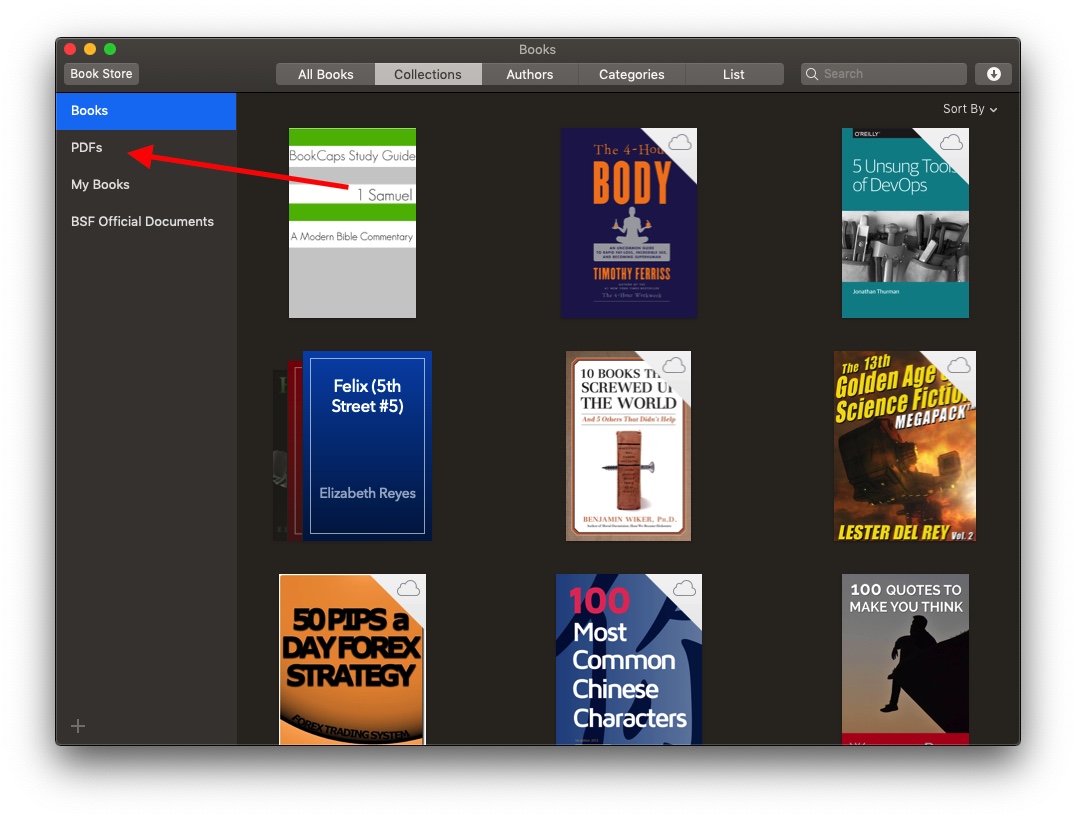 Whoa! Suddenly they all are there. I re-authenticated on my Mac (entered my iCloud password) and everything popped up.

I don't know if we have the same issue, but it just might work for you too. Try logging out of and back into iCloud!

When I had this problem, my pdf books collection suddenly disappear and my backup files could not save pdf files form the book app.

I have tried several software to retrieve those pdf files with no result. Finally,I downloaded iMazing app from imazing.com, then installed iMazing app in my macbook pro. After read the manual, I found all of my missing pdf books collection in file system> books. Then I copy all of my pdf books to my folder in my mac book pro. This app saving my pdf book collection.

Not the answer you're looking for? Browse other questions tagged iphone ipad icloud pdf books .

0
Impossible to sort iBooks PDFs in Bookshelf view?
5
Is it possible to search within a PDF document using Kindle for iPad?
6
XCode Problem - Couldn't load settings from contents.xcplayground
0
Does iBooks sync metadata across devices via iCloud?
0
Can't transfer PDFs & eBooks from iMac to iPad 3 on iOS 6
1
Books - PDF - Preview - Search : "No Results Found"
1
"No PDFs" in iBooks on ipad; i.e. PDFs don't persist in Library
0
iCloud shows storage being used but files are not visible