I'm seeing intermittent latency spikes when on wifi, but only when pinging my MBP from another machine and not when pinging from the MBP to another machine. It seems to be causing stuttering with Steam In-Home Streaming. Any suggestions are greatly appreciated!

I feel strongly that this is the Mac and not the networking hardware. I've seen it on multiple access points across different vendors and channels. 2.4G and 5G are both affected.

With wifi logging enabled, nothing is logged in /var/log/wifi.log during the ping test. Location services are disabled, and I'm not clicking on the wifi icon during the test. I have tried resetting the SMC.

Update: Shown below is the minimal example. I have run this test many times and for long durations. I have been constantly ingesting ping data into InfluxDB using Telegraf. Here is the last 7 days, where the orange is my MacBook. There are a couple other anomalies present, but it's clear the high latency has been occurring for a while.

Update 2: Wireshark on the MBP shows ICMP "Response Time" as consistently < 0.1ms during the test. I believe it's looking at the time between when it sees the request come in from the reply go out.

But outgoing pings are fine:

Now here's something curious. If I rapidly send pings out, the inbound variance disappears!

(while the above is running)

Given this, my best guess is there is some kind of power saving mechanism turning off the radio. 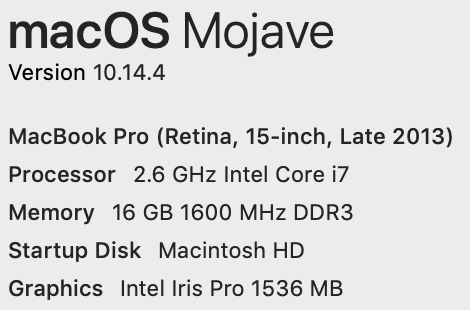 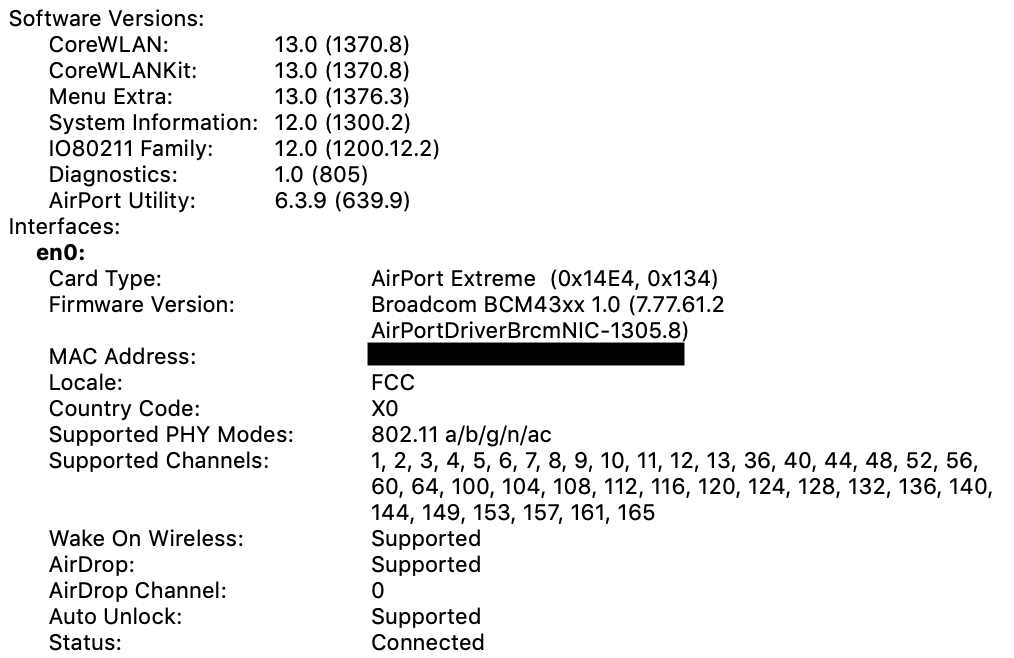 Update 3: Here are two simultaneous packet captures with the "same" ICMP packet highlighted. The left was captured using tcpdump on the Ubiquiti UniFi access point that my MBP is connected to, and the right was captured on the MBP. You can see the sequence number is the same. But the calculated response time from the access point's point-of-view is relatively high at 71 ms, while the MBP saw < 1 ms between the request and the response.

Yes, there is indeed such a power saving measure implemented on the Mac. This is common across WiFi chipsets on all platforms and operating systems, and is actually part of the WiFi standard itself.

The PSM (power saving mode) of the WiFi chipset takes many forms. This you're probably experiencing is known as the "connected-idle" mode. In this mode it introduces a small latency of less than 100 ms (typically 50-100 ms) for the first packet received after the module was put in the connected-idle mode.

Other power saving modes exist that save more power, but for example the connected-sleep mode introduces an extra latency of typically 300 ms, which is more than you measure here.

Unfortunately there seem to be no official interface from Apple to change power saving modes manually, or to disable certain power saving modes. The only work around is simply to actually use the radio for something which will prevent it from going into the connected-sleep mode at all. That could be done with for example a ping running in the background permanently. Obviously this will consume more power, which could be a nuisance when running on battery.

However despite the above, you should be aware that this power saving mode isn't really something that the end-user is supposed to or normally notices at all. Remember that the latency only affects the very first packet received after the module is put into connected-sleep mode, and that it is only put in connected-sleep mode after a period of nonuse.

When using Steam In-Home Streaming you would have a constant stream of packets to/from your Mac. This means that the WiFi module isn't going to go into the connected-sleep mode while streaming.

I don't think your conclusion is correct. I'd continue to diagnose the problem without making any assumptions as to what the potential reason is for your intermittent WiFi connectivity issue. It could be a whole host of reasons so the trick with this type of troubleshooting exercise is to eliminate potential sources of problems until you can build up a case as to what's causing your issue.

For starters ping isn't really a good tool for diagnosing problems like this. It can be useful for gross connectivity issues, but in this case I'd use something like PingPlotter (free for basic use) or the CLI tool mtr (available via brew. 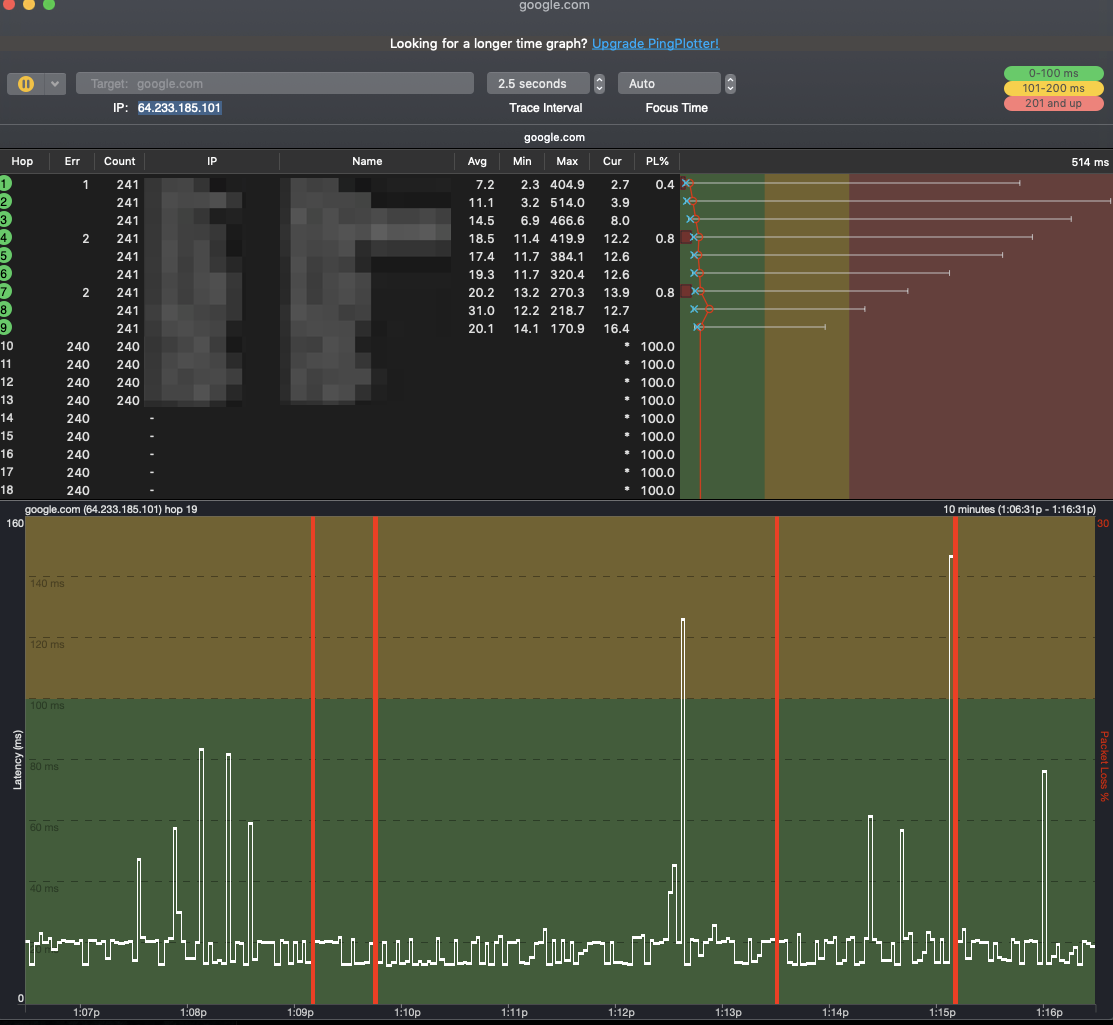 The above shows red bars where my Macbook Pro was having intermittent issues connecting to the WiFi access point. These issues were isolated enough that we could identify that they were actually being caused by the access point and not the WiFi network in the Macbook Pro.

Once you've started to monitor things see if your issue shows any patterns.

You can also typically uncover intermittent issues by using something like speedtest-cli.

There's another application which is a GUI with the same name, Speedtest, from the Appstore which could be helpful if you'd rather have a GUI form of something like speedtest-cli.

Another GUI tool for analyzing your WiFi network that I've found useful is NetSpot. There's commercial as well as free options available to use it. 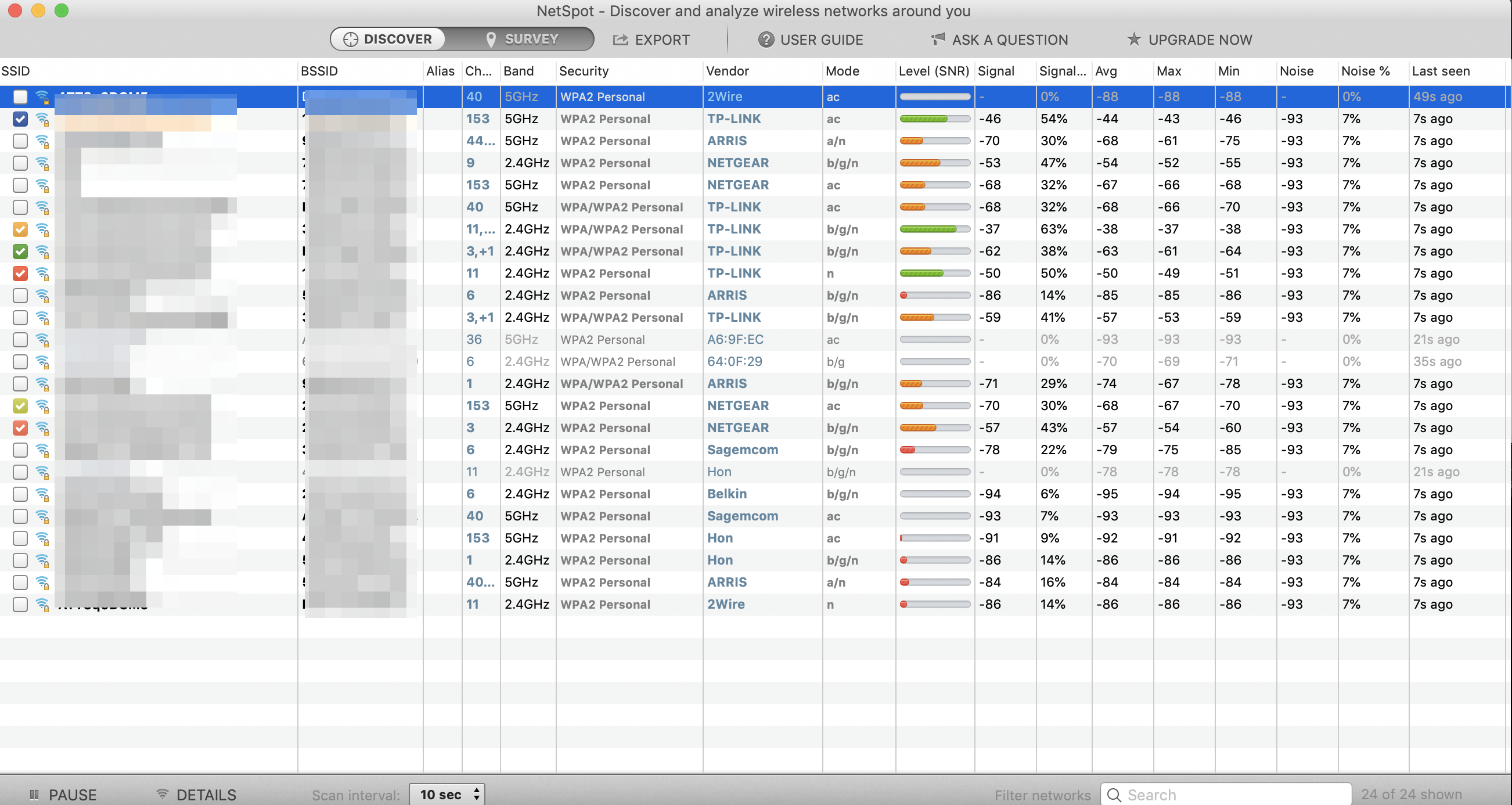 macOS also includes a basic scanning app. It's completely not obvious how to get to it IMO. To access it you'll want to hold down the Option key, ⌥ and then click on the networking icon in the top menubar.

Once the diagnostic window is open you can launch additional tools from it. This is the part that most people seem to be unaware of with this app.

With the diagnostic window open and focused, look in the menubar and open up the "Windows" pulldown, within it are several tools to analyze your network. 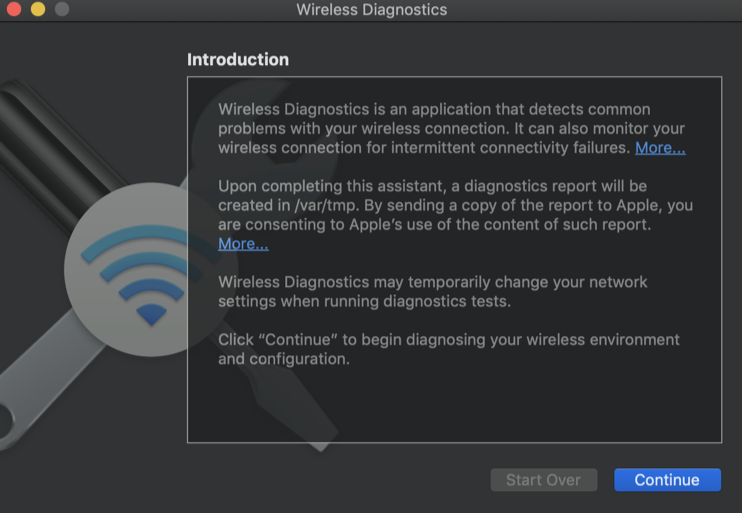 From this menu you can launch a variety of tools such as "Logs" to collect detailed logs or "Performance to analyze your WiFi connection. 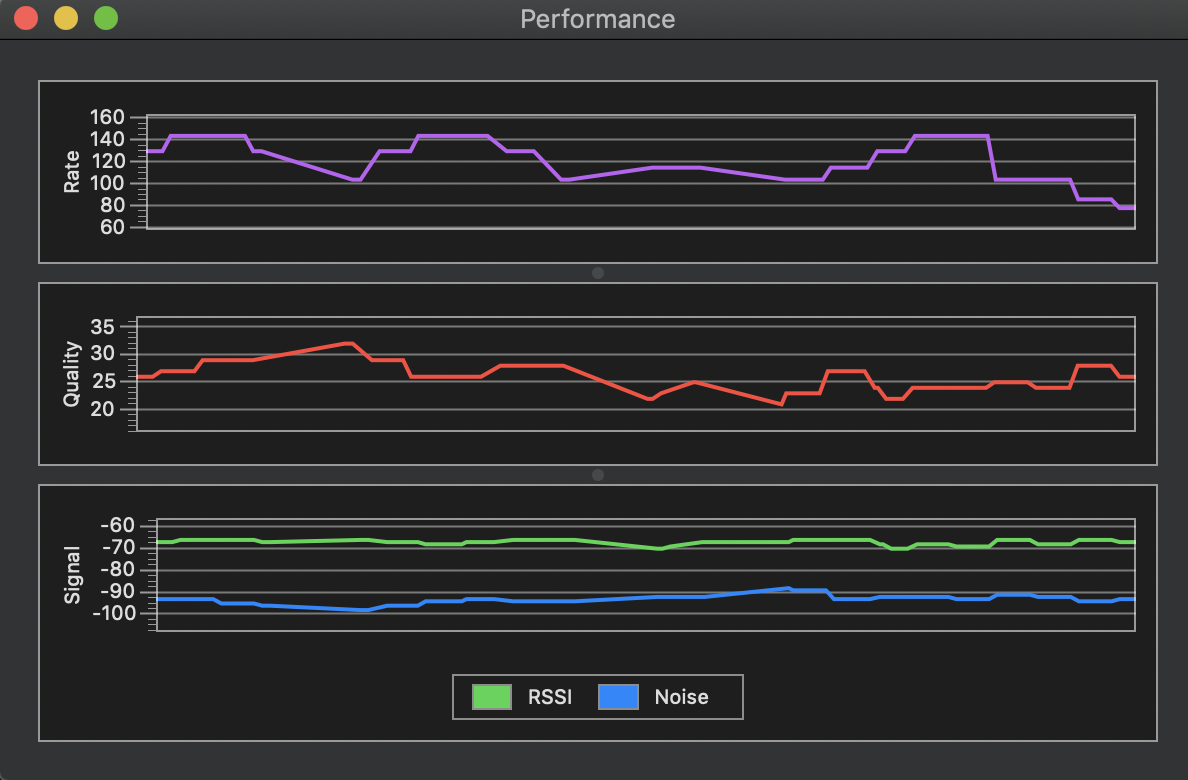 If you're still not finding the cause of your WiFi troubles, you may want enlist the help of Wireshark. Installing it is pretty straightforward, you can use brew to install the DMG through casks (CLI + GUI) or you can install the CLI only version through the vanilla brew formula.

DMG install via cask CLI only 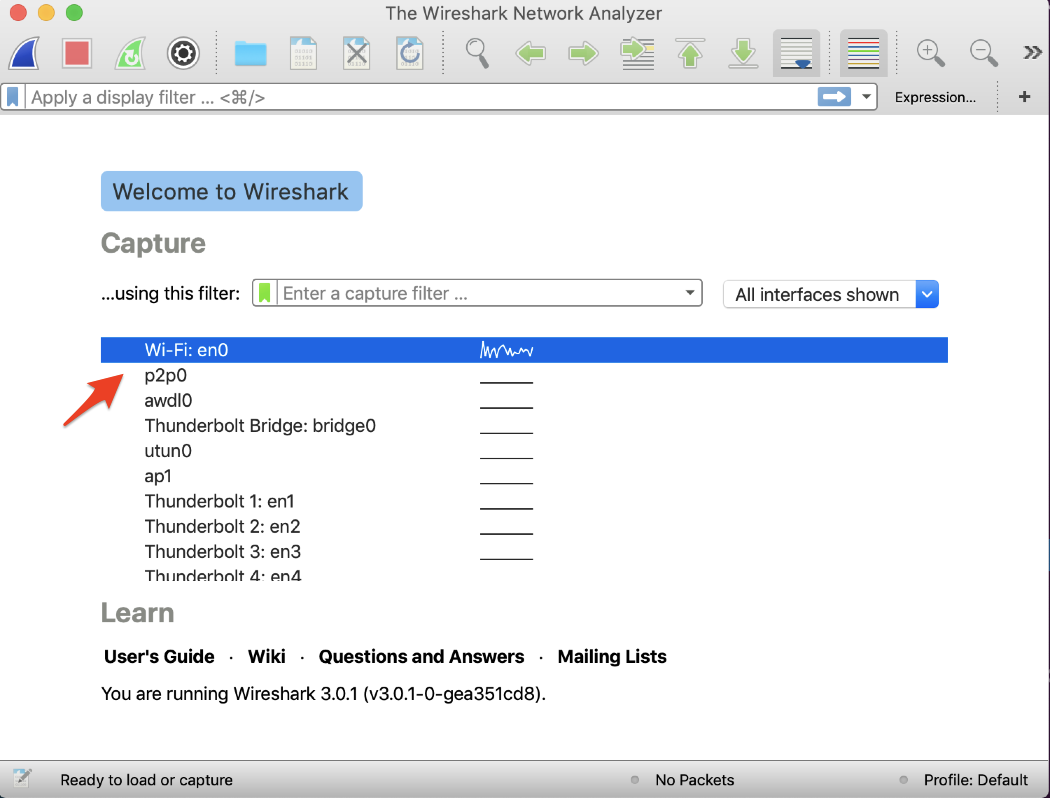 If you double click the interface's name Wireshark will immediately start a packet capture session. After you've let that run for a bit, hopefully during one of failure scenarios that you're trying to troubleshoot you can click the red square to stop the capture (red #1 in diagram below).

You can then analyze the packets caught in the red #2 area of the UI and you should be able to identify types of packets (red #3, for eg. is a ping packet). 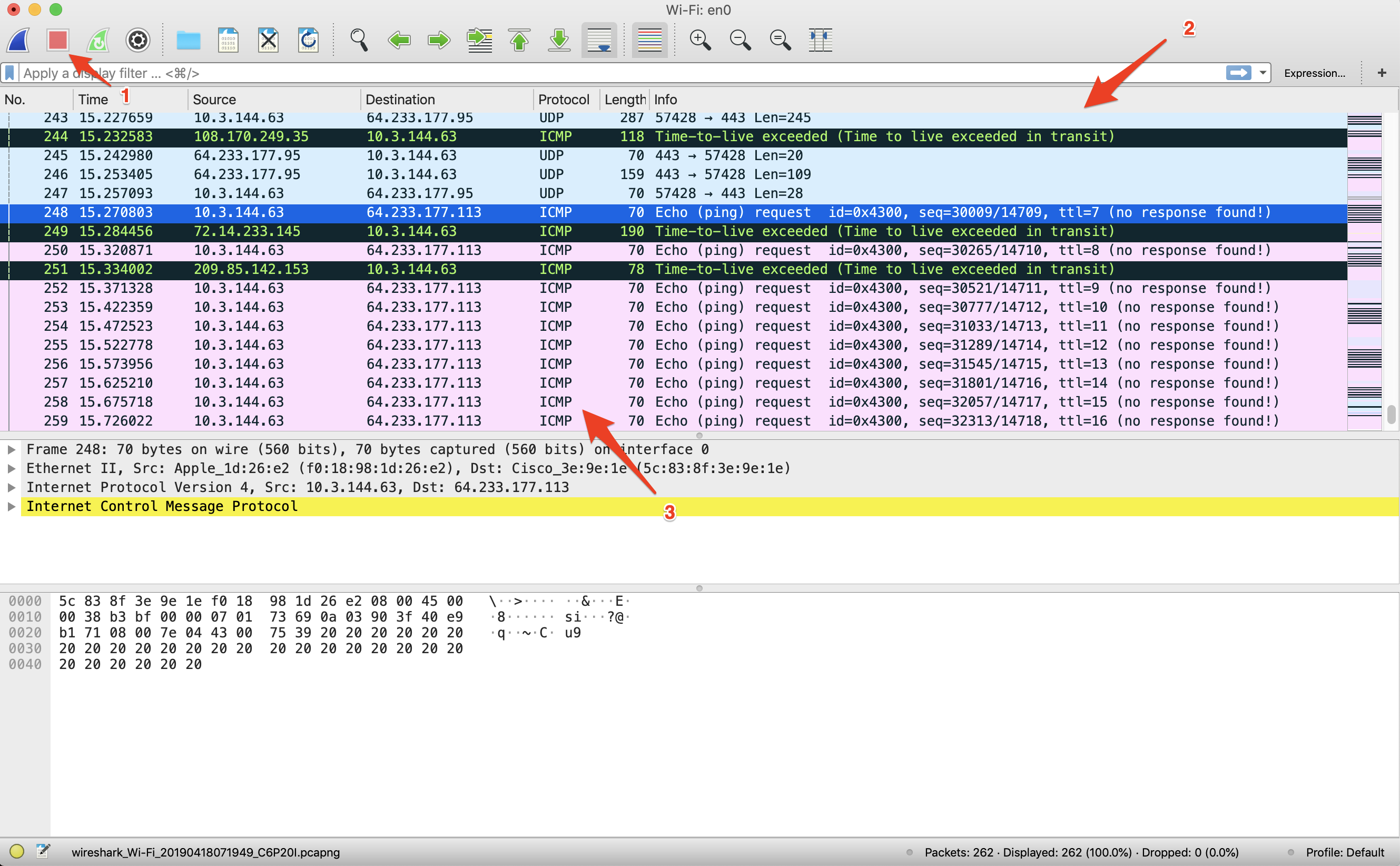 Not the answer you're looking for? Browse other questions tagged macbook-pro network wifi .

3
AirPort Express: Extremely high latency
0
Unable to ping any website through terminal and network utility
4
My native mac apps are not connecting to the internet, but Google Chrome does and works correctly. Why is this?
2
Cannot ping between OS X on wireless LAN
11
Terminal/Safari Cannot Resolve Host But Chrome Can Connect
1
rMBP high battery drain, doesn't seem to sleep after HS upgrade
1
Unreliable WiFi on MacBook: how can I measure how "unreliable" it is?