I noticed that for aliases etc the title of a Terminal tab/window often isn't the same as the command I typed. This is sometimes confusing, especially for long-running processes with similar names.

So how can I configure bash/Terminal in a way which ensures that the window title always reflects the command as typed?

I tried modifying PS4 to run a command. This works, however it also prints a lot of other garbage, like getting the current git branch and other commands I put in my PS1. If there's a way for PS4 to only run scripts and not output anything (not even line breaks) I'm fine with that too as a solution.

I also tried the various options under Preferences > Profiles > Tab, but it does not allow showing the literal command I just entered.

Open a Terminal window and go to preferences. Click on Profiles and select Window from the pane, In the Window pane there is an option to show active process name. Check that box and the one under it that says arguments. See image below. 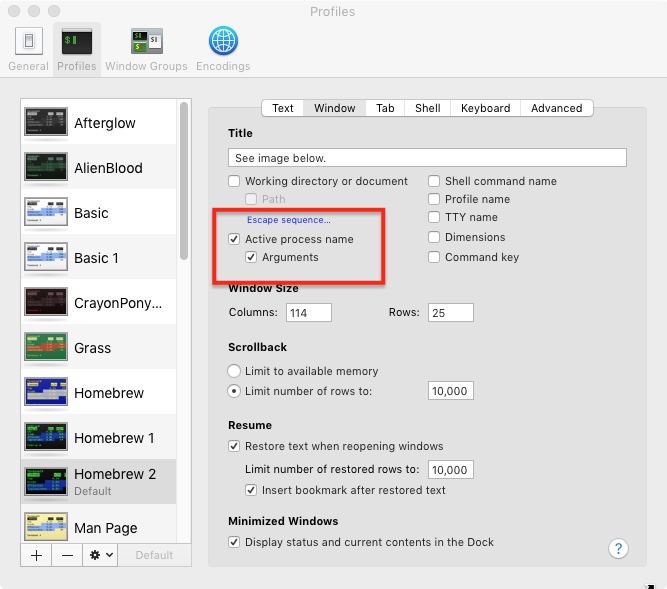 Not the answer you're looking for? Browse other questions tagged terminal command-line bash .

6
How do I set the terminal tab title via command line?

2
Set terminal window title in a script
0
Help me reset the terminal after sudo command mistake
9
Command to close terminal window
3
Characters do not echo in OS X terminal unless I hit the delete key
2
Terminal window title rapidly changes when first opening
19
In Terminal, how to erase typed command quickly?
2
Setting Terminal tab names in OS X and using vim
6
How do I set the terminal tab title via command line?
0
How to fix menus and windows in macOS 10.14.6 that do not show any items?
1
What has caused the CTRL + x + e shortcut to stop working in the shell?