Can the Apple 10W USB charger be used with a 7-port USB hub to charge iPad 2, iPhone 4S, and other devices at the same time when traveling?

When traveling, I probably will have the iPad 2, iPhone 4S, a USB backup charger, and some misc devices such as a Kindle Fire and a Sony digital camera that uses USB to charge its battery.

So instead of hooking them all up to the computer to charge them overnight, in the event that I actually need to charge every one of them that night, is it possible to use Apple's 10W USB charger that Apple makes (it is 100V to 240V compatible): 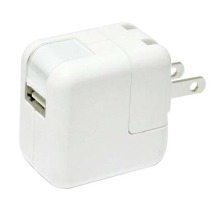 and then hook it up to any USB hub, such as this Belkin 7-port one:

You typically will need one high-powered (5W) USB port for each of such devices to charge efficiently. The iPad alone requires more to charge, hence the non-standard 10W adapter. In addition, the USB hub itself is not likely to provide the necessary wattage to any of the ports (these usually are low-powered ports), so chances are not even one device will efficiently charge when connected alone to such a hub.

Apple use some tricky schemes to identify battery chargers and compatible devices. The sense resistor is common and it is what is responsible for the message 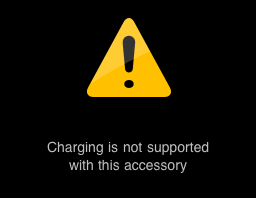 with some combinations of devices.

See the fun they had working out the right sense resistors when designing the MintyBoost. (and do check out ladyada.net if you like this sort of thing, there are some very clever hacks)

I don't think your iPad will charge at all with the hub. I have a Belkin Dual USB Charger and when connected the iPad just says

because it detects that it is not plugged into a high power USB port. Apple provide some explanation about high power in this technical note - basically the port starts out supplying the usual 500mA maximum and will supply extra power if capable.

The USB hub is almost certainly not a high power port, even if it is a powered hub. And it won't have the correct sense resistors to tell the iPhone/iPad that it is a device capable of charging it. So even if it could distribute power from the 10W adapter the devices could not recognise that they were connected to a 10W adapter.

If you only carry one charger then it should be the 10W adapter but you really need to connect the iPad directly to it. While the iPad can charge from the 5W adapter it will take much longer and you would probably not get a full charge on your device.

I think your ideal combination of charging devices is one Apple 10W adapter and one Apple 5W adapter, or two 10W adapters (I don't see the point of buying the 5W adapters since they are the same price and the 10W can do everything the 5W can do, it's just a tiny bit larger.)

Then you should be able to charge 5 or 6 devices a night with no problems.

No, in fact most devices won't charge at all unless the hub is connected to a USB host.

If it's plugged into a charging device, it simply starts charging. Again, the state of the data lines tells it enough about the charger so it knows how much current it can pull - this is how an iPad knows it's plugged into an iPhone/iPod charger and charges more slowly. The data line state is a key that says, "This charger only supports 1A."

If it's plugged into a USB host or hub, then it has to talk to the host device (usually a computer, or a computer through the hub) and request power. The hub or computer might only be able to supply 100mA, or 500mA, or on newer USB ports 1A or 2A. The key point, however, is that the device has to talk to the computer and get permission to use that power.

The hub cannot give permission, it simply passes the request along to the computer.

There are devices which disobey the USB specification and attempt to charge anyway, and they might be able to charge under such an arrangement.

Apple devices, however, will never charge unless attached to a charger that follows Apple's charging spec, or a computer with sufficient current output.

There are a number of multiport chargers available now, though. Google for "usb 4 port charger" and you'll find many inexpensive options that will work with Apple devices, and be more compact than a charger and USB hub anyway.

Wouldn't using the cable in the following link (http://www.canadacomputers.com/product_info.php?cPath=95_97&item_id=040817) plugged into a normal 5W powered hub do the trick?

A simple and fairly obvious solution is to us a power strip with a charger for each device. Each device comes with its own charger so a power strip is the only additional expense.

Not the answer you're looking for? Browse other questions tagged ipad usb iphone charging .

6
At what point do iPads stop displaying "not charging" when connected to power?

20
Can I use my iPhone charger for charging other USB based devices?
5
Retina macbook max USB power output
2
What prevents an iPad or iPod charger from overcharging?
1
Charging my US iPad in Israel
1
Other than speed, is there a reason that a 10W iPad charger shouldn't charge a new MacBook Pro 2016?
47
Is the Macbook 12 inch's USB-C charger interchangeable with other USB-C chargers or devices?
4
USB hub that charges and allows normal data connectivity at the same time on same port
1
One USB-port on MacBook Pro late 2011 doesn't work.
1
Can you charge an iPad and connect a USB-C device at the same time?