I have a MacBook Pro running 10.6.8. It has all the latest updates (except for an item each for iTunes and Safari). Having not used Mail for a week or so, I've run into some problems with it - plus similar problems with Colloquy and LimeChat (both IRC clients). For all three, the problem is that the screen is not being redrawn; it appears to be acting transparently, and so screen furniture (scrollbars etc) are leaving a trail where the application content should be. 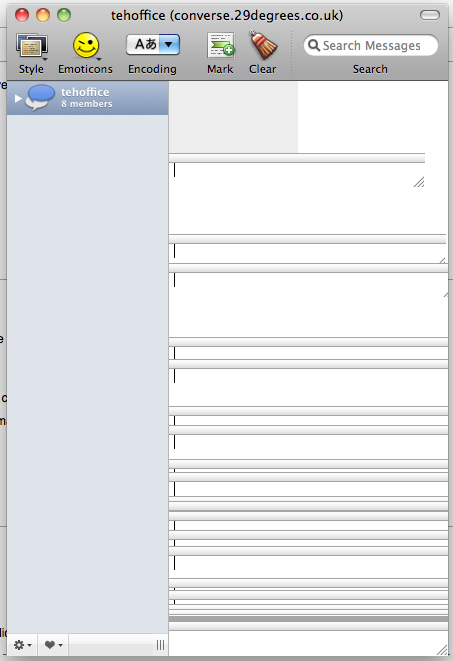 I've tried an array of things to fix it - obviously tried rebooting, and also shutting down fully before turning back on.

Also, I've deleted ~/Library/Preferences/info.colloquy.plist, with no change in Colloquy's behaviour. To be honest I'd not expect it to be an individual application issue, since it is affecting these three applications.

I've tried a few graphics things too. I've turned off the energy saving graphics mode in the Energy Preferences pane (although it has worked since new with that feature enabled). I was also running gfxCardStatus, now removed from the boot sequence and not running.

I've tried removing most things from opening at login, again to no avail. I've tried a new user account, and the same problems are exhibited in LimeChat. Not yet tried Mail in the second account - will do so - but am not hopeful.

As a long shot, my colleague suggests that I try verifying my primary (only) disk, and this turns out to be fine (verifying permissions as I type all disk permissions have been fixed, no change).

The last thing I installed was a modem driver, but it's been working fine with this, so I don't think it was that that has upset the system. Not sure I've done anything differently that might have caused this, tbh. So... I am now a bit stuck. Any ideas?

I installed the pending update for Safari, which I thought was quite irrelevant, and that has sorted it out. Initially I thought that this did some system 'tidying up', which kicked a graphics module back into shape. But a colleague points out that Mail may well use WebKit's rendering engine, and it is possible that all of the IRC clients I tried also do.

The problem is still most strange, as the update for Safari has been pending for a great deal longer than the problem, which must have cropped up around ten days ago or less. So it was working without that update, and furthermore I've not idea what I did to trigger the fault.

Still, sorted now. Hopefully this post will be useful for anyone who encounters a similar problem.

Lightbulb moment: I seem to remember that I used the Software Update feature to download but not install the Safari update (5.1.2) between Mail working and breaking. Since the update required a restart to install, I left it and forgot about it. My guess is that, although it appeared to just download the Safari update, in fact it modified (and broke) the current configuration. If I can find a way to feedback to Bad Apple (tm), then I'll do so. Feedback done!

Not the answer you're looking for? Browse other questions tagged macbook-pro graphics screen .