Can I view what app data has not been uploaded to iCloud?

Viewing System Preferences -> iCloud on my Mac shows that I have 2.24GB out of the standard 5GB available, but each morning when I wake up I see an error message on my iPhone that 'There is not enough space to back up to iCloud'. I'm certain I had not added over 2GB of data to be backed up in a single day (the day this problem began).

How do I know what it's trying to upload to iCloud? I don't want to go deleting data I'd rather save just to get it to backup appropriately.

This screen will list your devices and by selecting the current device (like your iPhone if you're looking at it on your iPhone) you can see the list of applications that saves data to the backup. Here you can see the backup size per app and you can also disable/enable them individually. To modify the settings for your other devices you need to go to the same screen on them.

The Manage Storage screen is one of those "live updating" screens like much of iOS' Settings section has. Like when iTunes Match rolled out, an iTunes Match login form simply appeared in the Music preferences. Or when you go into General > Network, how the "Set Up Personal Hotspot" only appears after apparently phoning home to your carrier to determine eligibility.

After going to Settings > General > Usage > Manage Storage and waiting there for more than a few seconds, eventually the text as seen in this screenshot popped out and informed me of why backups were not taking place. 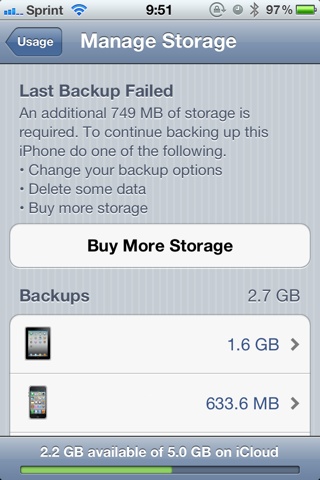 It's not exactly telling me what hasn't been backed up, per the question, but I'm actually fine with this, because I just wanted to see how much content was not backed up.

I would up deciding to delete a previous device's backup data, and that, along with shutting off camera roll backups (due to videos), freed up enough space for backups to begin working again.

Not the answer you're looking for? Browse other questions tagged ios backup icloud .

3
access iCloud backup app data
1
Can I restore my iOS 5.1.1 iPod Touch from a backup from an iOS 7 iPhone?
17
iCloud storage full: “Not Enough Storage”. Backups exceed 5GB
4
How do I force my iOS device to create a new backup on iCloud?
2
iCloud storage reporting backups that do not exists
1
Why is Skype using over 1 GB of iCloud backup data?
4
Restore from iCloud Backup lost ALL my photos — Ideas?
0
How to check if iPhone has been backed to iCloud?