need help on font rendering from website to safari, preview and adobe

I am on an iMac with high Sierra 10.13.6. Have been having this issue over multiple os for a long time. When i go to my financial website and view A monthly statement I n safari pop up, the font is hard to read and too close. Same in Adobe reader when opened in the downloaded .pdf. If I do the same in Firefox it looks good until I download it then its too close again. No issues on a pc. ive tried to change the screen resolution with no effect. also checked the Mac fonts and all seem to be good - no corruption. any ideas on what to check. the attached is a small sample of adobe / safari too close together and what I would expect and like to see form firefox. Still troubleshooting this one. Spent another hour on the phone with the bank - no luck. Have now discovered that while the file can be viewed ok with Firefox, I get the messed up fonts when printing from there. Also have tried to export from Firefox as .pdf file with no luck either - then the fonts stagger between small-normal to oversized. Still trying to figure it out. 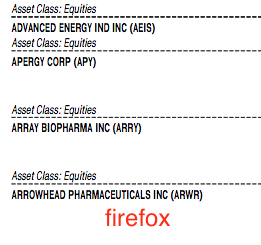 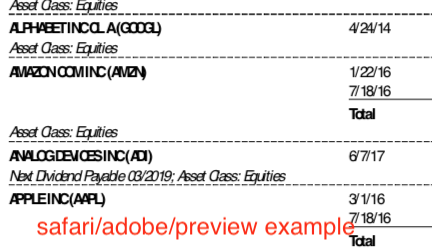 1
How can I fix broken font-rendering in Safari?
2
I need to compress a PDF to 5 mb (at most, but best exactly)
0
Different ways of displaying documents between Adobe Reader and Preview
3
Why is Preview printing blurry text when there is colour in a document?
3
PDF Printing Quality Issues
1
Why are some PDFs scrambled when opened with Preview on Mac?