(The Amp, cords, and microphone all work fine as do all elements of the DAW garage band).

History: We were successfully using an iMac connected through the line-in audio to a Europower Amp (pmp560m) + microphone to record songs in Garage Band. Everything was working great ... until we plugged headphones into the Mac so that we could stack record (record a track while listening to a previously recorded track).

Recording and playback worked splendidly until the headphones were unplugged. When they were unplugged we lost audio playback on the entire mac. (This issue was resolved by checking audio settings, closing programs and restarting the computer).

The Current Problem: Now everything works as usual except for the line-in audio port. So we are unable to record.

When I checked the Mac settings for audio Line-in, it has a pulse, but is seemingly erratic. Moving the slider on "Output volume" doesn't do anything. 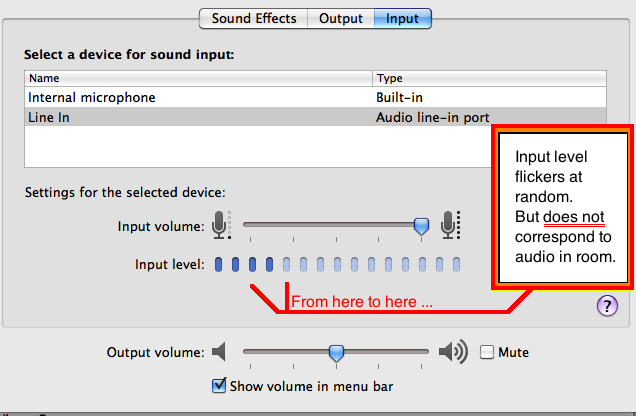 The input for recording tracks in Garage Band read the same, and there is a constant low-level wave (sounds like white noise) when we try to record.

The problem seems to be the line-in port.

Does this port just burn out with time?

Why would plugging in headphones while recording cause this issue?

Thanks in advance for any help on this!