According to the Connection Doctor (Window > Connection Doctor), all connections work properly. Outgoing mail also works. With the same setup on my iPhone 6, iOS 12.1.13, there are no issues and the inbox updates promptly. The issue seems to be related to the Apple Mail on my Desktop computer, and to Exchange accounts only. My Gmail (IMAP) account in Apple Mail works as expected. 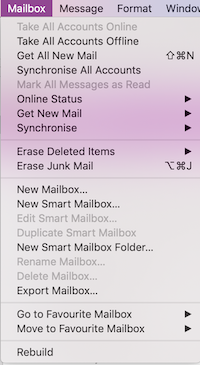 How can I troubleshoot the issue, when one of several mailboxes won’t show new mails?

As MS Exchange keeps all of your data on the server there is absolutely no reason why you shouldn't just remove that account. Delete any leftover mailboxes from mail.app and then re-add the Exchange account. I find that often fixes issues between mail.app and Exchange.

As an aside I stopped using mail.app for exchange connectivity (for work) for reasons that there are times when mail.app, Calendar, contacts, reminders, etc. just don't behave as expected when connecting to an Exchange server. Microsoft's (free, last I checked) Outlook client is actually an excellent mail client and I have never had a problem with Outlook on the Mac or on my iPhone.

I had this problem for a while, but it seems, somehow, to have worked itself out (which is always worrying). To be more explicit:

However, over last weekend (a period when I logged into my machines less often than usual), messages started appearing in a more timely fashion. As of this week, things seem to be back to normal, at least for now.

Very curious, but at least it's working.

Also, FWIW (and for search purposes in the future), a few other bits of evidence for very similar problems over many macOS releases:

OP @Christopher, do you have any updates?

Same problem here: university-based Exchange account seems to download emails correctly but they don't actually show up in my InBox until I do a "Rebuild." One further symptom: after the Rebuild, the contents of some messages do not display, instead of a message content I see a blank screen. I can then Quit and Restart Mail, and then all previously downloaded messages are displayed normally. (But new messages from the Exchange server do not display until a Rebuild.)

Meanwhile, you can try the shortcut command+shift+N to refresh the account emails.

Not the answer you're looking for? Browse other questions tagged mail.app email mojave exchange .

1
How to fix when Apple Mail fails to display new Exchange Imap e-mail messages?
4
Apple Mail with Gmail Account (IMAP): Moving Mails from inbox to folders fails
1
Search all archived mails in the server in Apple Mail for OSX Mavericks
1
Apple Mail on Yosemite not syncing with Exchange
0
Move mail message back to inbox of Exchange account