What is the difference between the WPA2 Personal, WPA and WPA2 WiFi security passcodes?

I was editing the configuration for my Time Capsule, when I noticed that I had the following options for network encryption: 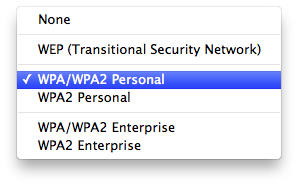 Why is there an option of WPA/WPA2? Is it as secure as WPA2 Personal?

When looking for the network with other devices, I'm am told to enter a WPA2 Password. Thus, I thought that I had configured it using WPA2 Personal.

I believe that WPA was the original WPA standard, and WPA2 was an improved version of it. Some network cards can’t connect to WPA2 networks. From the Wikipedia page on WPA:

The later WPA2 certification mark indicates compliance with the full IEEE 802.11i standard. This advanced protocol will not work with some older network cards.

The Wikipedia article cites a white paper from the Wi-Fi Alliance:

WPA is both forward and backward-compatible and is designed to run on existing Wi-Fi devices as a software download.

In a nutshell, a WPA/WPA2 network will any network card that supports WPA or WPA2 to connect to it; whereas a WPA2 only network locks out network cards that only support the newer standard. I don’t think there’s any meaningful difference in the security.

FWIW, I’ve used WPA2 Personal on my Airport Extreme since I bought it, and no device has ever had problems connecting.

Confession: I initially misread the question as being about the difference between Personal and Enterprise, and wrote this. Although not directly answering the question, I include it for interest.

“Personal” and “Enterprise” just refer to the two flavours of WPA and WPA2. From the Wi-fi Alliance’s page on WPA2:

I believe that WPA and WPA2 both come in these two flavours, hence the either/or. Personal is more suitable for a home network, but it’s less secure than enterprise. Enterprise connects to a “RADIUS server” for authentication. I don’t know what that is, but it sounds clever and secure.

I’d guess that a device connecting to your Time Capsule just sees a request for a WPA2 password, hence why it doesn’t ask you for a WPA2 Personal password.

Both 'WPA' and 'WPA2' use AES to encrypt the information transiting the WiFi network, but

WPA uses something called TKIP to manage the keys used to encrypt the data. TKIP is vulnerable to attack (it's not secure) and should not be used.

"WPA/WPA2 Personal", also called mixed-mode, allows negotiation of key management modes and reduces the security of the network to the lowest common denominator.

BOTTOM LINE: If you're concerned about security/privacy of information on your networks (wired and wireless) , DON'T use WPA or WPA/WPA2. Use WPA2 only. And, if you don't already know, WEP is basically the same as having no security at all.

Another poster points out that the 'Enterprise' modes send authentication requests to a server before allowing a client on the network. The two big advantages are:

The 'personal' pre-shared key ("PSK") is derived from the passphrase you type into your client, so even if PSK allowed long keys, you'd have to type a passphrase that most people would object to.

In general WPA2 personal is more secure that just WPA.

WPA/WPA2 Personal i believe to be either/or. It will use what it can. Normally being WPA2 Personal but the option below is a way to force a better security.

I have a TimeCapsule also and had to use the WPA/WPA2 Personal mode to allow an older Brother wireless printer to connect. Had the printer been capable of the newer WPA2 security protocol I would have used the WPA2 Personal setting in my TimeCapsule. Basically using WPA2 Personal is a tiny bit more secure, but restricts your wireless connections to newer devices.

Not the answer you're looking for? Browse other questions tagged security wifi .

3
Connection timeout when sharing internet with password
0
AirPort Express extending AirPort Extreme wireless network: can I use WEP and WPA2 Personal?
4
How to connect a Pioneer XW-SMA3 AirPlay speaker to WPA Personal wifi network?
3
How to solve the issue that a Mac (Macbook Air) keeps on trying to use WEP to connect to Wifi?
4
iPhone 5 always asks for username when connect to Wifi
0
Macbook Pro no longer connects to wireless network. All other devices do
11
Devices cannot connect to my shared Wi-Fi
0
WPA warning when using WPA2-Personal with AES