Open a picture with Photoshop or Preview based on file location

Let's say I want to open pictures from those specific folders with Photoshop by default (with double-clicking the file):

And to open pictures with Preview by default in any other location.

I'm not aware of any solution out of the box. Maybe someone has an idea about it?

You could build a partial solution with using Hazel and Automator.

1st, create an Automator workflow that uses the "Set Application for Files" action on received files to Photoshop.

2nd, create a Hazel rule that runs that Automator script on any images dropped into a specific folder. You could skip Hazel and just create a folder action in Automator but that would fire on any file placed in that folder and that might not be what you want.

Files modified in such a way would still open in Photoshop once removed from that folder, which is why this is only a partial solution.

Based on Craig's answer, I found this very similar question that has a great solution using a bash script.

It works surprisingly well, at least for my needs.

The script is wrapped into an application, then the trick is to set up all the jpg files (for example) to be open with this application by default.

Automator is actually not needed, as it's possible to turn a bash script into an application from the Terminal.

Still, if one prefer using Automator, it looks like this (from there you just run "File --> export" and save your application): 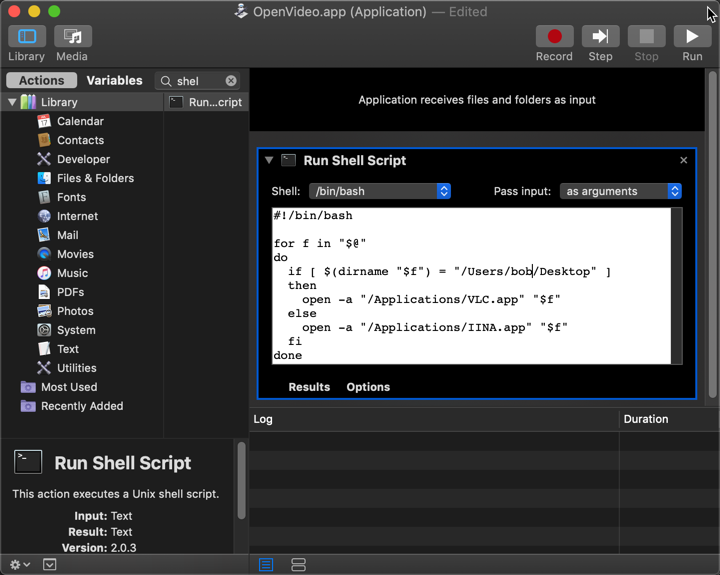 Not the answer you're looking for? Browse other questions tagged finder graphics .

21
How to make a Mac OS X .app with a shell script?
0
Dynamically change opening app according to file folder

2
why modified pictures lose the little white frame as thumbnails in finder?
0
Aperture : unreadable JPEG on Mountain Lion
14
Home folder has 'everyone' Read-Only permissions
0
Photoshop CC not responding when opening a 2MB PDF file
2
Shortcut to open file with alternative application
1
Prevent apps from changing the default app to open PDF files?
0
Resetting previously selected folder when selecting a file with Finder
2
macOS (Catalina 10.15.7) - Save dialog - no way to filter/search
1
Files grayed out in Finder. Can preview them, but cannot open, move or copy them
2
Fixing macOS Big Sur Finder SIDEBAR width prefs from command line?