30GB out of 32GB being used for wired memory? 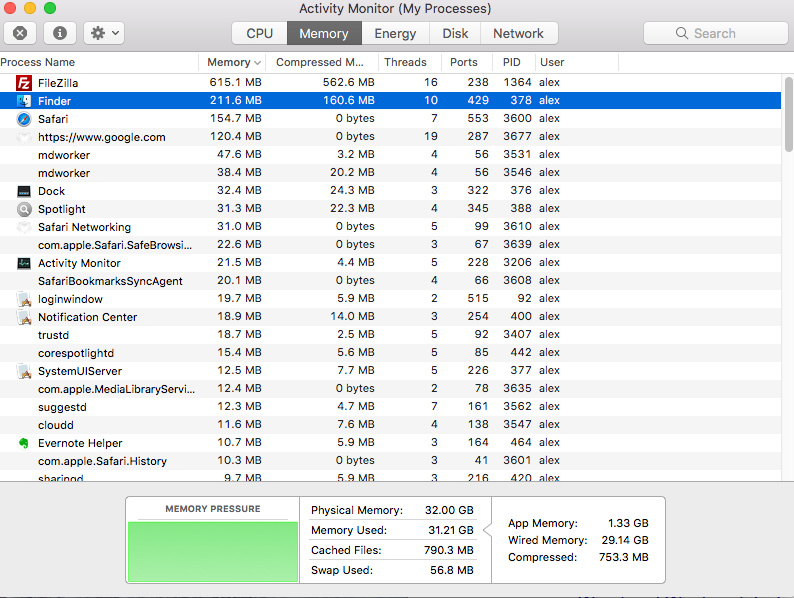 UPDATE: after a bit more usage it looks like FileZilla was just a red herring. Kernel task is the one causing the ballooning Wired Mem usage. To be precise, here are the top three offenders and the wired memory usage.

this was obtained by running

which i found here: Why does leaked memory appear malloced to kernel_task, and why can't OS X therefore garbage collect it

Most everything looks normal since the system reports it is able to fulfill all active memory requests (which is what green signifies), but we're not seeing the whole picture to understand the wired summary since your screen image doesn’t show all processes or wired allocations.

However, there are specific tools and a process to pin down exactly what process(es) have allocated wired memory as well as to watch real time the virtual memory statistics using vm_stat to validate my hunch / opinion (I don’t have enough data to be certain) that things are fine here.

In addition to my answer linked above - these threads are relevant for how wired memory used to work Lion and expecially 10.6 and older OS X. On the latest macOS, I’m not convinced excess wired is a problem anymore, but I’d love to help investigate if anyone can reproduce this case here with 90% or more of total memory being reported as Wired.

Not the answer you're looking for? Browse other questions tagged macos memory virtual-memory .

69
What is wired memory?
11
Why does leaked memory appear malloced to kernel_task, and why can't OS X therefore garbage collect it
7
Why does free + active + inactive + speculative + wired not equal total RAM?
5
Why might more memory be wired in safe mode than in normal mode?

69
What is wired memory?
2
Any way to know what causes allocation of wired memory?
4
How do I diagnose my Python program being killed due to an out-of-memory error?
1
Wired memory in activity monitor
4
OS X: Memory usage freaking me out
11
Why does leaked memory appear malloced to kernel_task, and why can't OS X therefore garbage collect it
2
eapolclient process using 30GB of memory?
14
what do App Memory, Wired Memory, and Compressed mean?
0
Swp memory no longer being used Macbook Pro Mid 2015
2
Is there a command line tool that accurately describes the amount of used memory?