Ever since I updated my computer to macOS Mojave I’ve been experiencing issues. The issues all started at the same time and they include:

In the past most of the issues I was having were simply fixed by resetting the SMC or by simply rebooting the computer. Unfortunately at this point no matter how many times I reset the SMC, or reboot the computer, the internal keyboard and trackpad are not responding, even though the trackpad still makes a “click” from the Taptic Engine when clicked.

The reason certain resets and tests were unsuccessful is because the OS is unable to detect the keyboard, but others like the SMC do no require the OS to preform the reset so it functions.

Does anyone have any ideas on ways to solve this issue that doesn’t involve completely reinstalling macOS?

I had the same issue and was able to fix it. For everyone having this issue, try solution from here: Press Shift-Control-Option on the left side of the built-in keyboard, then press the power button at the same time. Hold these keys and the power button for 10 seconds. If you have a MacBook Pro with Touch ID, the Touch ID button is also the power button.

We had this problem, we took it to a service and they said this is a common problem with MBP2015.

There's a cable that connects the motherboard with the touchpad.

That cable can die over time.

They swapped it out and we could pick up the machine and it was up and running with working touchpad/keyboard in just 2 hours.

In my case, the problem was indeed with the cable that connects the touchpad with the mainboard: 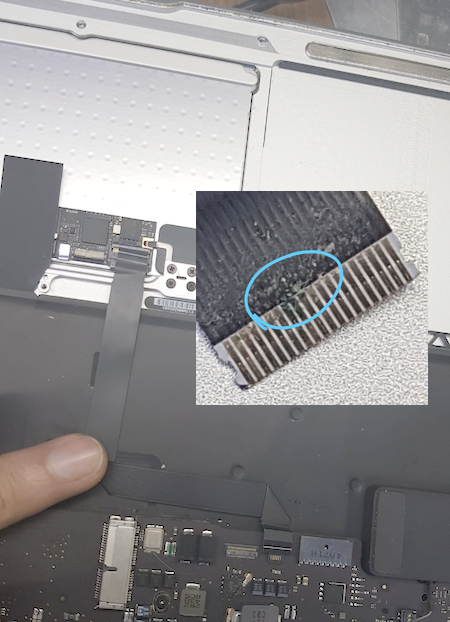 The cable could die over time as @EpicPandaForce said, or because of oxidation (if you spilled water on the keyboard).

Replacing the cable will fix the problem.

Not the answer you're looking for? Browse other questions tagged keyboard mojave trackpad .

16
Why is the Force Touch "taptic" TrackPad not clicking/selecting on 2015 MacBook Pro?
1
Internal keyboard and trackpad quit working, mac not booting up properly
4
MacBook Pro keyboard and Trackpad not working. All solutions found have failed
1
MacBook Pro 13” 2014 - Trackpad gestures not working after long sleep