Is there still some way to get scroll wheel functionality on the Marble Mouse with macOS today? 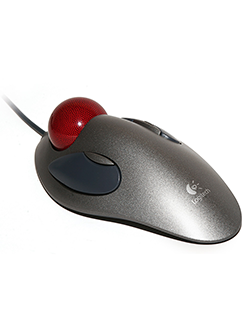 I have a Logitech Marble Mouse that I was hoping I could use with a Mac. It used to be that you could use KeyRemap4Macbook, known later as Karabiner, to allow you to hold a button down and turn the trackball into a scroll wheel. However, since Karabiner became Karabiner-Elements, it doesn't seem to have the mouse options it used to, and this method is no longer possible.

I used to use a utility on Windows called Marble Scroll (which eventually became abandonware but someone else made another with the same name), and Linux has functionality in evdev that allows you to do this natively.

The closest workaround I've found so far is with Grab Scroll in Smart Scroll, but that doesn't send actual scroll wheel signals, it only scrolls - so some applications won't support it properly, like with alt+scroll wheel zoom in Photoshop. It also stops scrolling when the cursor hits a screen edge.

So, on macOS High Sierra or later, is there any way to give this trackball proper scroll wheel behavior?

17
Mouse Wheel Emulation on Mac
28
Yosemite: Disabling inertia scrolling using scroll wheel for the mouse
1
Is it possible to toggle the trackball as a scroll wheel using Karabiner?
1
Ways to scroll with a mouse without the wheel or dragging the scroll bar
1
Zoom content not screen with Magic Mouse
1
[Sierra]: Mouse scroll