After a very recent install-from-scratch of Mojave, I was installing a Safari extension and noticed one already there called "Download Video". 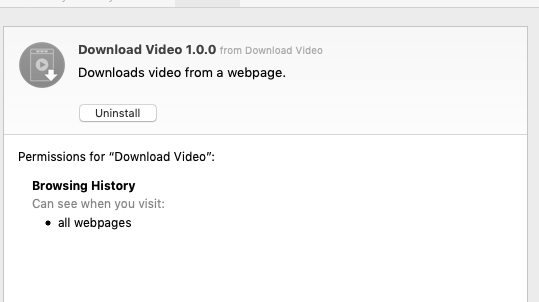 It claims to be version 1.0.0 and that it "Downloads video from a webpage". It was not active (i.e. its box in the Extensions manager was unchecked) but I've no idea how it got there. I certainly didn't knowingly do it myself

I did notice one other inactive extension -- "Open in Internet Explorer" -- that I also did not explicitly install myself. However, it says it came as part of Parallels Desktop and I did install that. So that leads me to conclude that the installation of certain apps may also involve installation of Safari extensions. And I certainly have installed some apps since after my clean Mojave install, so maybe the Download Video thing piggy-backed in off one of those? But most of what I've installed is fairly well-known, standard stuff -- MS Office, Emacs, and the like. Nothing I'd expect to have a sneaky video downloader hanging off it.

Any idea where in could have come from?

If I had to guess on what this was there would be two things that I would guess that it might be:

Either way, I would uninstall it if you don't use it anymore as it could be anything

Turns out, as per commented suggestion by James Singhal, it's a browser extension associated with a component of Parallels Toolbox. Details are here. So overall not the sneaky malware I wondered that it might be.

Now I can't be 100% sure that I wasn't asked a generic "do you want us to install browser extensions" question when Toolbox was being installed (even it was a mere side effect of the thing I actually was consciously installing -- Parallels Desktop itself), but I'm 99% sure of it. So for that I guess I'll grant Parallels one slap on the wrist. These malware-fraught days, they really should know better than to drive-by install a piece of software -- without even a sign of provenance -- even if they at least had the grace not to activate it.

Anyway, back down to DEFCON 5. As you were.

P.S. FWIW, I figured this out by trying to uninstall the thing. I was told I'd have to do that by uninstalling its associated app, and when I accepted the offer to see where that app was in Finder, it was revealed that it was in the Parallel Toolbox.app package. A quick Google led me to the emails pointed to by the above link.

Not the answer you're looking for? Browse other questions tagged safari-extensions .