iPhone turning off on low battery

My iPhone SE on iOS 12 has been acting strange recently.

Yesterday, it turned off at around 10% and when I tried to turn it on it said that it has no power. Two minutes later, it turned on and said it had 14% capacity remaining.

After a few minutes I tried again and it turned on. Then it gives an error saying that it "canâ€™t connect to my mobile data network" and then the phone crashes.

I turned it on again, and it worked normally.

What is causing this?

EDIT: After digging around my batter settings I found this: 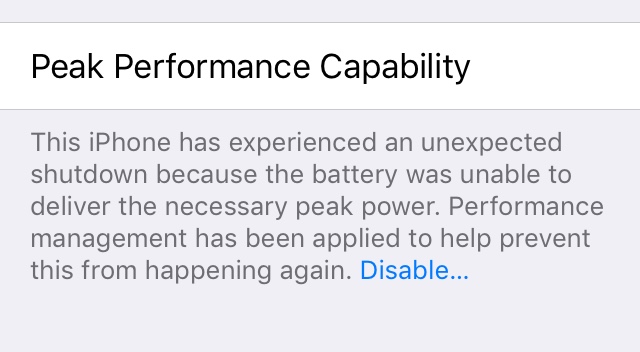 Your battery is failing/has failed.

The symptoms that your iPhone is exhibiting is the same as what discussed in the following posts:

Basically, when you see a percentage of battery remaining, it's a calculation based on what it's measuring (volts, amps, draw, etc.) at that moment in time. You cannot measure remaining capacity - this especially noticeable if one of the in-line cells is faulty.

The only solution to this problem is to replace the battery.

also please tell us how old your phone is.

I suggest going to settings-> battery-> battery health and see what does the number say. it can be a temporary fix if you can negotiate on either performance(will be fast but may shutdown) or experience(will be slow but won't go off).

0
After updating to latest iOS13.4 my iPhone XR gets shutdown even when the batter shows 20%
8
Mid 2012 MBP shuts down claiming no power with charge at 30% or 40% or more
8
Fully charged MacBook Air turns off when power cord removed
4
Why is my MacBook Pro showing the low battery screen while at 100%?
1
Is it time for a new battery?
1
My iPhone SE only boots on quick charge

12
Battery on white MacBook shuts off abruptly after 30% charge is left
2
MacBook Pro battery drains quickly, shows Service Battery when restarted
13
What causes iPhone low battery crashes? Is there a software fix?
1
Battery issue with iOS7 and iPhone4
13
iPhone 5S suddenly turns off at 30-40% of battery life
1
IPhone 6s battery usage for restart
0
Macbook Air - old battery charges, replacement battery does not
4
Why is my MacBook Pro showing the low battery screen while at 100%?
3
Does an iPhone battery drain faster in cold?
0
New battery: "The battery's capacity is significantly reduced."