So I've got this MB Air (Mojave 14.1 -all updates applied-) at work and thought I would try backing it up using Time Machine to an old PC running Windows Server 2012 (All updates also applied) and I go through the setup procedure:

And I get an error

After much Googling where a lot of answers pop up from AskDifferent none of them seem to have this particular issue using macOS Mojave.

Pretty sure I have the correct options for the sparse bundle selected. I tried both HFS+ and APFS format on the sparsebundle. And once it is mounted on the desktop on the Mac I can put files into the sparse bundle, so it is writable.

Wondering if anyone has any experience with this?

=== I tried the suggestion, "sudo tmutil setdestination smb://username@server/share -p instead, and allow tmutil to create it's own sparsebundle on the server." which returned an error. See comment below.

It turns out that when you create a sparse bundle disk image that resides on an APFS volume that it is ALWAYS formatted as APFS even if you specify the the format as HFS+ like this: 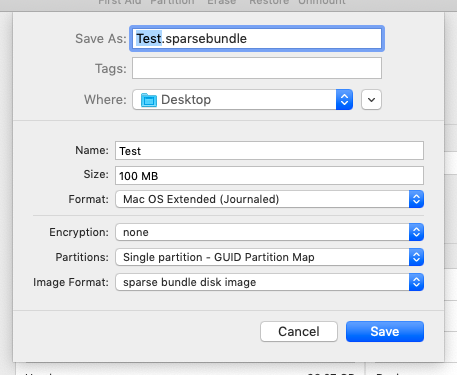 I created a few of these (just to be sure) and each one failed as a Time machine Destination.

As @user128998 pointed out in his comment Time Machine relies on a feature of HFS+ to do it's job and will not work on one formatted as APFS.

I had assumed that disk utility was creating an HFS+ formatted sparsebundle because I had selected that option when creating the image, as shown in the screencap above.

In frustration I did a Get Info on the mounted sparseimage bundle and it showed as an APFS volume. Grr... So I deleted it and created another one and was very careful to NOT select APFS.

When I mounted that sparseimage it too showed as an APFS volume.

Opening Disk Utility I selected the mounted sparseimage volume and reformatted it as HFS+. The operation took longer than I expected (3 - 4 minutes) but it was successful. And this time when I ran the command

So maybe I found a bug in Mojave (14.2) with disk images and/or sparsebundles. Or maybe it is expected behavior and I didn't know it, either way this can be marked as solved.

It may work if you set the backup via sudo tmutil setdestination -p smb://username@server/share instead, and allow tmutil to create it's own sparsebundle on the server. That way it will also know where to go to mount the sparsebundle in the future for backups when it is not already mounted

Not the answer you're looking for? Browse other questions tagged terminal backup time-machine windows mojave .