I was silly enough to set a bunch of video encodes running and leave my computer resulting in it running out of disk space.

On return to discover it I tried to empty the trash which would have solved the issue but due to low disk space that did not complete properly.

I ended up having to reboot the machine and the "emptying trash" dialog/process did not exit properly.

On reboot the trash appeared empty but none of the diskspace that should have freed was available.

Third reboot this time into safe mode, what freed up space was adding a new tiny file to trash (just a random screenshot) and emptying trash. That freed up the 150G I was expecting.

However, now with system appearing to run normally and the space freed as expected, I do a disk utility first aid check and the following appears.

Can someone explain what does this error mean?

I'm contemplating a restore from time machine backup. It's obvious that I could "just restore anyway to be on the safe side", but I'd like to understand a bit more if possible about what has happened if anyone can help out and offer any specific diagnosis or such. Thanks. 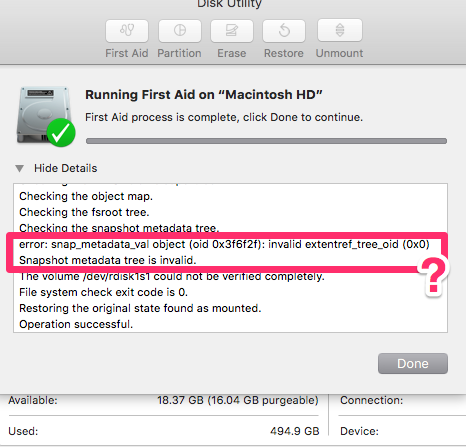 43
Emptying trash of the USB drive
4
How can I automatically have my Trash emptied when disk space gets below a certain point?
3
Can't empty the trash after deleting user account
10
“Directory not empty” sudo rm -r -i “file name” not working
0
How do I get OS X 10.11.6 to return my free space?
0
Deleted time machine backups from external HD, but did not free space
1
How can I empty the trash with old backups in it?
0
Impossible to Delete Catalina Installers