I'm running Mojave (10.14) and I have a Cisco AnyConnect VPN over which traffic for selected routes (determined by the VPN profile, out of my control) is sent.

Traffic routing works fine, the issue is that DNS resolution is taking place over the VPN for hostnames that are not on the internal network.

The output of scutil --dns contains:

That means when I open www.apple.com, I see over the VPN:

How do I update the resolver to use Cloudflare/Google first for DNS, using the command line on Mac?

I have a similar situation where I have to use a very heavy-handed captive portal Wi-Fi connection with a very heavy-handed, very creepy virtual firewall. Not only does snoop on secure connections, it impersonates DNS server IPs, using DPI (when it detects the request).

The only thing that works for me is to go over the top of the VPN/firewall rather than try to sneak under it, using dnscrypt-proxy using only DNS-over-HTTPS, as it can detect the dnscrypt protocol. Right now, its not aware of DNS-over-HTTPS at all.

I implement it using a LaunchAgent that watches /etc/resolve.conf for changes, and when it detects a change, it restarts dnscrypt-proxy, then runs networksetup -setdnsservers Wi-Fi 127.0.0.1.

Aside: I've been using Quad9 for a while now, and much prefer it to Google and CloudFlare.

Edit: After playing a bit more with this, I'm noticing that (somehow, I haven't even figured out where the traffic is to/from), IPv6 addresses are somehow resolved with ::1 as a DNS server, even if there are no other DNS servers set. So probably better to just disable IPv6 if you can.

Yeah, I think being able to split out that route might be just too much to do with the newer system-level VPN implementation; I think DNS proxying is probably your best bet. It might be possible to remove ipsec0 as the default route and then add it back for a restricted IP range... but every time I try this (with IKEv2, not AnyConnect, but I'm assuming they're using the same API) it just... stops.

Also, perhaps you might be able to use an app like Shimo? It's available with Setapp! I don't know exactly how AnyConnect works, but it says it supports it, and it has configuration options available that are exactly what you are looking for for other protocols, including IKE, so... maybe? 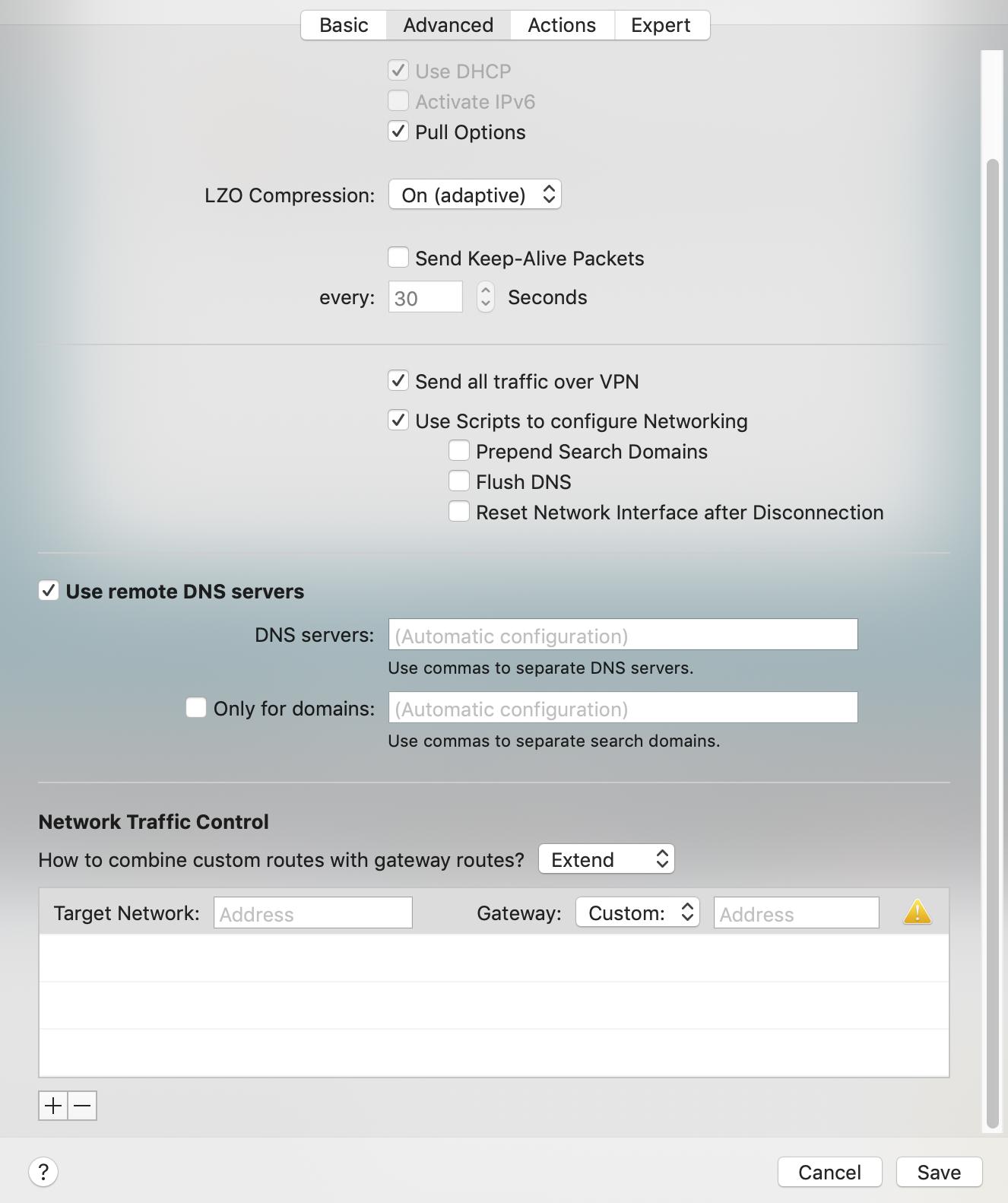 The short answer is you likely cannot make this change.

This is a very typical situation where the managed settings disallow a split VPN tunnel situation. Literally, when you connect to the VPN gateway - it ensures you can no longer reach any network destination except for the DNS and settings that are on the other end network of where the VPN terminates.

To fix this, you need to:

(this is a common question that never gets an answer other than - don't use VPN, but I hope there is a way for you)

Your VPN client is registering its DNS state with scutil, and you can use the same tool to change the DNS to what you want.

I don't know how to register your own state and make it override the others, but you can modify all of the registered states to reflect your preferred DNS server, easily:

This code runs through the list of registered states, and for each one, overwrites it with a new one that just contains your DNS server of choice. You could also add search domains or other options.

You can experiment with scutil by running it at the command line, and typing help.

3
Local DNS circumvented when WiFi is active
2
Reverse tethering an iPhone 4s with dead Murata wifi/bt chip
0
Force DNS server ip while connected to VPN
0
How to forward local DNS queries to a VM when macOS is in offline mode?
6
How to override DNS resolver ordering while connected to L2TP VPN
1
Catalina cannot resolve servers in the .local domain without the domain being specified
0
What's the grammar of the Dynamic Store's DNS config?