I have a problem which I've faced for about 3 years and it's driving me crazy!

My Wi-Fi is connected and has very good signal but after a few minutes (sometimes few hours, hard to say) I have no internet. YouTube starts spinning, any open sites just stop reacting, everything is offline even though Wi-Fi is still connected. 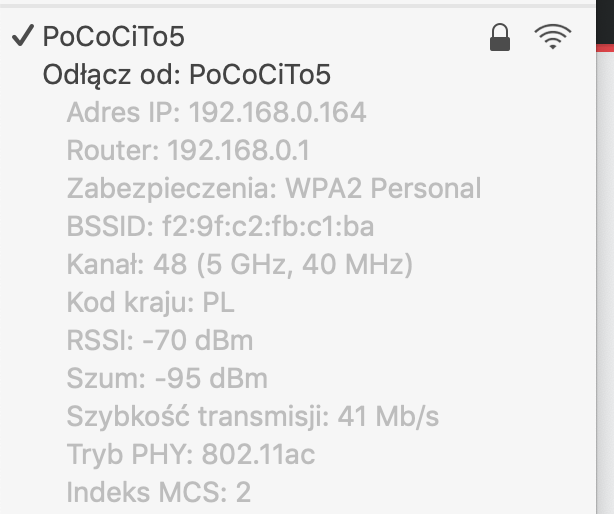 I'm not even sure if this is a problem with the MacBook.

I also have a PC which is connected via USB external Wi-Fi card (some cheap TPLINK) and I don't think it's that bad. It's also 2.4ghz

I have a few routers with included AP from my provider, I recently changed to Unify Lite and nothing helped. I have 2 separated Wi-Fi, 2.4ghz and 5hz (currently 40mhz band and I've tried different configs).

Anyway, I know that the answer could be:

I'm actually being driven crazy and I want to know WHY I have this problem so I can solve it.

What diagnostics should I run?

Looking at your WiFi report, I would say it is not very good overall.

When RSSI reaches 72 the OSX WiFi will try to switch to next best (on your WiFI list).

Yours is at 70 which is not good at all.

Resulting MCS index is to low (2)

Here is an example of excellent WiFi. 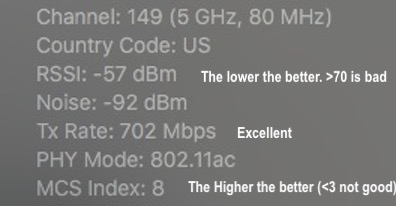 Further improvement to the RSSI can be achieved by switching the Chanel (to avoid overcrowding from other WiFi on same channel.)

You can run this in Terminal that will show last 24 hours of why the WiFi was disconnected.

Important to know. The AirPort will keep the WiFi information on for some time (making you believe it is connected) before correcting that.

Not the answer you're looking for? Browse other questions tagged macbook-pro network wifi bluetooth internet .