Why shift-cmd-n fails as a custom shortcut for Firefox “New Private Window”?

I created the shiftcommandn shortcut for Firefox in Syst Prefs to match other browsers' behavior.

It registers in the Firefox Menubar. 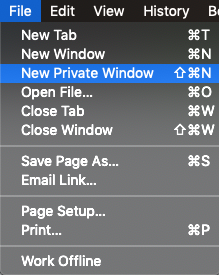 But pressing the shortcut opens a new non-private window, and it loads there the first item in my "Top Sites".

I imagine I could create another shortcut to override this behavior, but what is this behavior? I don't see anything highlighted in the Firefox Menubar when I hit the shortcut. Or might there be another solution (other than using a different shortcut to open new private windows)?

This has been a known Mac Firefox bug for years and years. Because Firefox is not truly a native macOS app, it carries over odd behaviors, one of which being that you cannot fully override its pre-defined keyboard shortcuts.

Firefox 55 addressed this partially as Mozilla bug #429824, which allowed new keyboard shortcuts to be created via System Preferences. Overriding existing shortcuts like "New Private Window" or "Paste" or whatever is still not completely possible, but progress (or lack thereof) is being tracked by Mozilla bug #1333781. In any case, you get all sorts of weird, undefined behavior if you try to override those shortcuts anyway.

Before the great extension purge in Firefox 57, Firefox extensions like keyconfig let you work around the problem by remapping those shortcuts within Firefox itself. After Firefox retired all legacy extensions, this once again became impossible.

Since Firefox 57 (being so annoyed by some of its default, un-Mac-like shortcuts) I've compiled Firefox from source code just so I could patch its keyboard shortcut configurations. Not something I'd recommend to most people, but it is one potential workaround until the bug is fixed upstream.

Not the answer you're looking for? Browse other questions tagged shortcut firefox .

0
Remapping keybinding not workin in Firefox for MacOS (mojave)
6
Why can I not set Safari keyboard shortcuts? Conflicts with secondary, unlisted Back/Forward commands

2
Firefox - Shortcut for activating bookmarks in Bookmarks Toolbar?
1
Firefox: double-click on titlebar maximize window instead on open new tab
0
How I disable or remove shortcut global (Shift+Cmd+C)?
1
keyboard shortcut is driving me crazy, how do I get rid of it?
3
How can I remove cmd+shift+left/right shortcut in Finder?