I often need to rename longer filenames in Finder. I used to do Shift + Command + ←/→ to select text from cursor to the start/end of the field.

But in macOS Mojave, suddenly this combination started to switch to previous/next Finder tab - so when I use the shortcut, file name editing is cancelled and I get switched to a new tab.

This doesn't happen in macOS High Sierra, and it's described in Apple's support document, Mac keyboard shortcuts as:

Is this a bug? Is there a known workaround?

If you set your own shortcut for moving between tabs of a window, the Shift-Command-Arrow combinations will work as before.

To set your own shortcut: 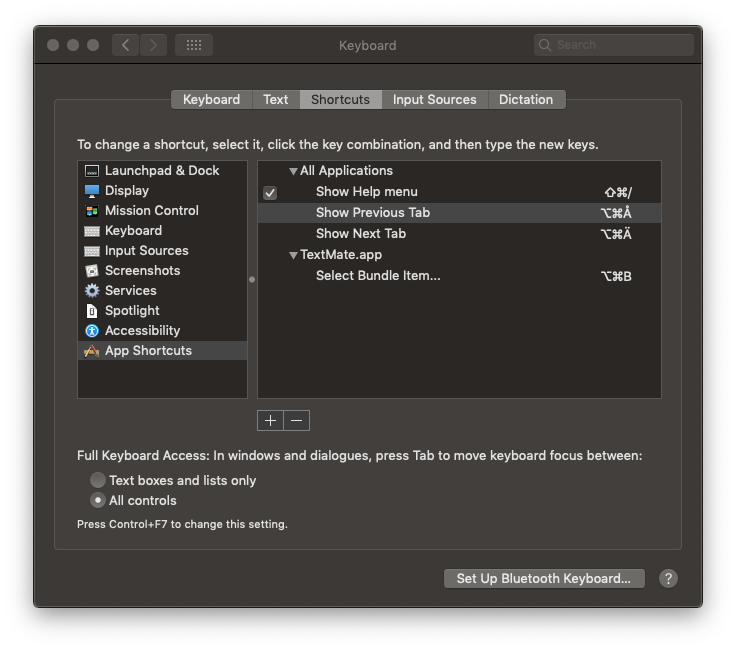 The vast majority of textboxes on macOS (including those in third-party apps) support Emacs keybindings for moving around text. These use the Ctrl key instead of Command and are thus less likely to be remapped randomly by OS changes.

In your specific case, you can use Ctrl+Shift+A and Ctrl+Shift+E to select text from the cursor to the start or end of the line respectively. These shortcuts can be entered entirely with your left hand, which might even speed you up a little.

Also, if you're finding yourself renaming files often in Finder, consider using the multi-file renaming tool built into the Finder. Simply select multiple files, right-click (or ctrl-click/two-finger click) on them and select "Rename N Items...". This pops up a dialog box that lets you do some simple rename transformations (adding text, replacing text, or formatting names sequentially).

Changing the shortcut in system prefs did the trick for me.

Just changed the command to: command + shift + ↑ or ↓, which I never use in finder so I made the choice specific to finder.

Not the answer you're looking for? Browse other questions tagged keyboard finder mojave .