I purchased a Mac Mini 2018 and connected it to my Dell 42" monitor via HDMI. I works fine except that the screen goes black intermittently and comes back after 3 or 5 seconds. The monitor and cable works well with other computers. I also checked the connection and upgraded the OS to the latest one. Nothing helps.

I unplugged the HDMI cable and plugged it into USB-C using an adapter. It has no problem. So I guess the HDMI port has an issue.

Do any of you have this problem? 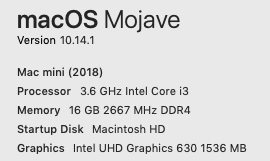 I don't have the exact same problem, but the HDMI port does seem to behave a little oddly; the signal doesn't appear to be 100% perfect - during boot, wakeup, or after display mode changes, some of my displays will briefly show a distorted image. Either the colours are off, the image is shifted, the image is briefly simply noise, etc. but it seems to settle down OK after a few seconds on the displays I have and so far has not recurred once the image has "settled in".

The USB-C to HDMI cable is a fine solution if the above mode restrictions are OK for your display; otherwise, if your display has a DisplayPort input, I recommend trying a USB-C to DisplayPort cable. Apart from that Acer display, this is working fine on all other displays I've tried too, including those that have shown the brief image corruption I mentioned via HDMI.

I have chalked it up variously to "Apple's high standards," "not completely compatible," "why, Apple, just why?!"

Me, I'd buy another cable (different brand, with a good return policy) and give that one a try.

It could be a problem with the cable or the port on the Mac. But unless it's a really cheap HDMI cable that you can blame on crappy manufacturing in (insert country of choice here) it is merely an inexplicable incompatibility that you may never know the cause of.

Not the answer you're looking for? Browse other questions tagged mac display mac-mini hdmi .