Why does ‘freedom’ return the french fries 🍟 emoji?

In my emoji picker when I enter freedom I see some french fries. 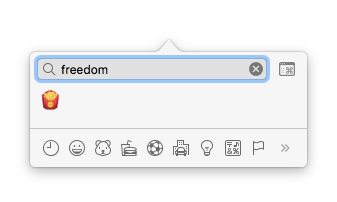 So if I want to write something like the following:

People of the world appreciate what you're given, go out there and enjoy your freedom

So emojifying the above quote is somewhat dangerous:

The 🍟 emoji is offered as an option for any search matching the string ‘freedom fries’, which

was a political euphemism for French fries in the United States. The term was born in 2003 when the then Republican Chairman of the Committee on House Administration, Bob Ney, renamed the menu item in three Congressional cafeterias in response to France's opposition to the proposed invasion of Iraq.

In the character picker, any prefix substring match on a word relating to that emoji will present the emoji for selection. Therefore ‘free’ or ‘freedom’ will match ‘freedom fries’.

Where does the OS find these strings?

CoreEmoji.framework contains a list of emojis and relevant search strings, per locale, in

replacing en with the locale. For the strings used by the character picker when searching, look in CharacterPicker.strings. For example:

.strings file as a

.plist in Xcode to prettyprint it as shown above, or use plutil:

I don't want QuickType to suggest 🍟 as an autocomplete to ‘freedom’!

It won't. QuickType autocomplete emoji suggestions, or Messages tap-to-replace words with emojis when the emoji keyboard is shown, is defined by another file, FindReplace.strings.

Emojis are suggested as word replacements when an entire word in the original text matches an entire word in a string relating to the emoji. The word ‘freedom’ will not be replaced by the emoji since the ‘freedom fries’ phrase only exists in CharacterPicker.strings, not FindReplace.strings.

It doesn't (any more)

The removal was plausibly a result of this Stack Exchange thread (posted Nov 2, 2018). I can't find anybody else on the internet drawing attention to this keyword until this question was posted. This question got over nine thousand views and was a Stack Exchange "Hot Network Question", and then I emailed Tim Cook for good measure.

I just wanted to draw your attention to the fact that the phrase “freedom fries”, a potentially offensive and dated political meme, is one of the search terms used by Apple’s emoji picker. (It’s listed in the CharacterPicker.plist file.)

Not the answer you're looking for? Browse other questions tagged macos text-input emoji .

77
How to add characters to the press and hold character picker in OS X Lion?
0
Why does my iPhone Spotlight (Springboard) search show a little poop emoji in the corner?
0
Why does my super sad face emoji change when I send it?
4
Why does iPhone text not suggest an American flag emoji?
9
How to bring up a precise Emoji in the iOS QuickType menu
2
Why some emoji doesn't display well on my Mac?
1
Change emoji font to the Windows style
5
Is it possible to update macOS's emoji keyboard (to use all emojis)
5
How to add characters (accents) to the press and hold character picker in macOS Big Sur?