I've been having massive lag spikes over the last few weeks which have gotten more consistent and prevalent the last day. I have been wearing this macbook out for a while but these lag spikes are like nothing I have seen before.

These are the spikes that have happened during the writing of this post. The system seems to take up to 80% of my cpu for differing lengths of time with no clear intervals.

Any tips on solving this or limiting the damage? I have been thinking of updating this machine to 10.11.1 for a while to make it compatible with my Wacom pad, but now I'm questioning if my old friend could still handle this...

EDIT1: The spikes have just started again and I have managed to capture the entire screen this time. Interesting to note is that as you can see I am running the steelseries engine for my mouse. During spikes my mouse completely ticks off as well and gets super sensitive until the end of the spike. 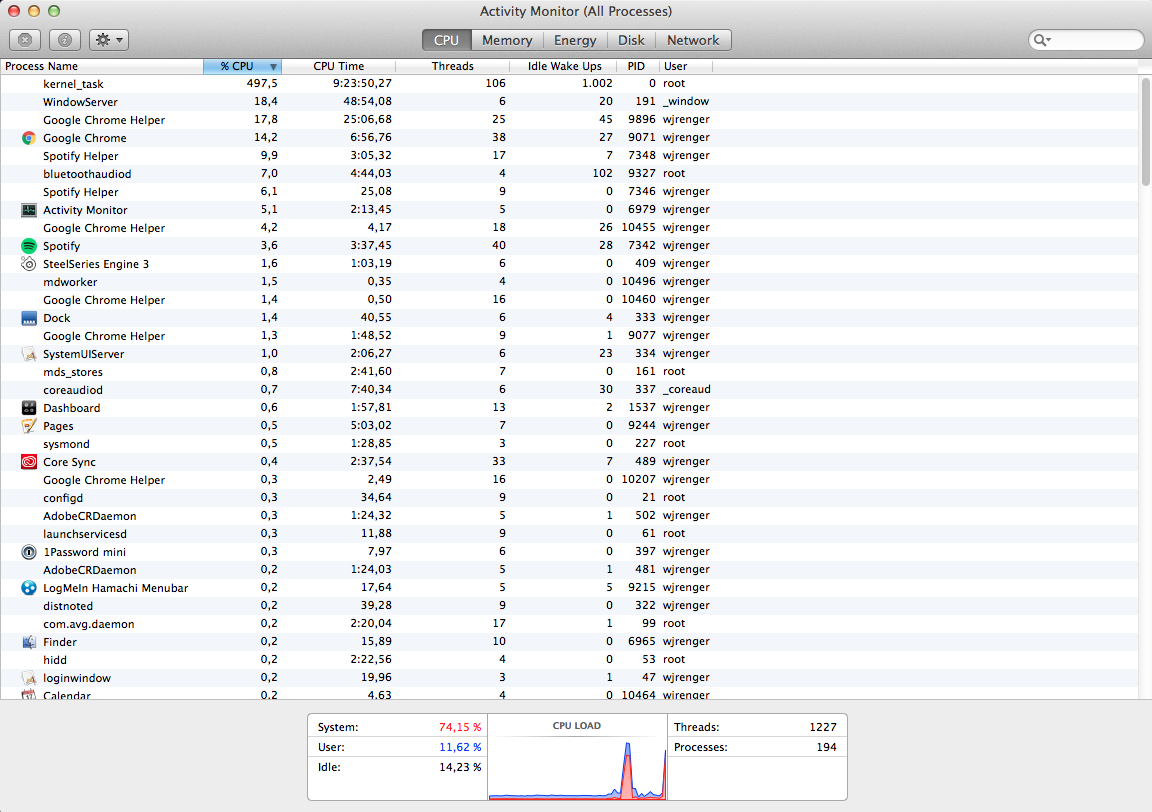 I hope this shines a bit more light onto the situation. Having trouble with my wifi TimeMachine backup at home so buying an external harddrive for backups soon after which i'll try to clean the insides to see if that helps any!

EDIT2: Used the sudo syscallbypid.d command. These were the top results: Try 1: 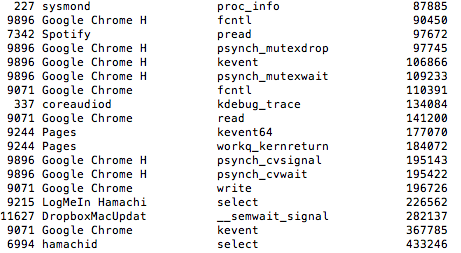 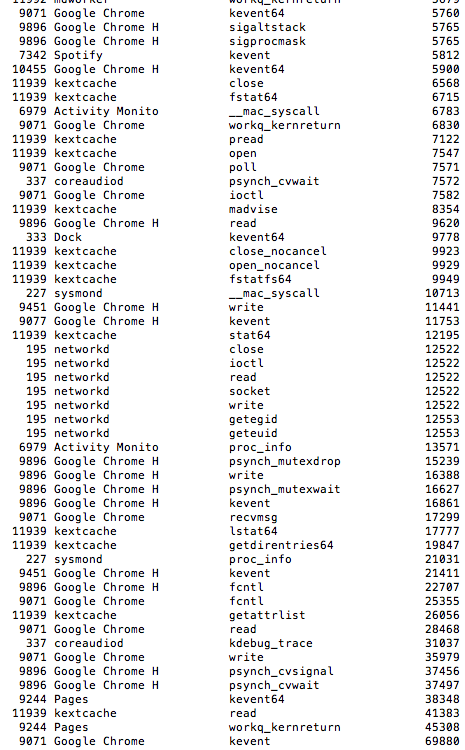 EDIT3:Tried it again, this time while not running chrome. Got another spike with these results: 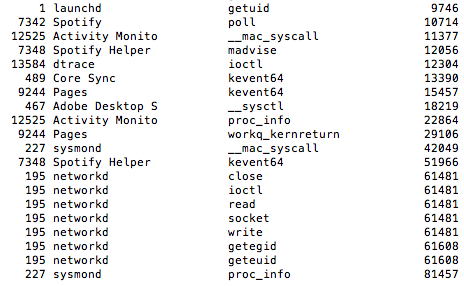 EDIT4(Still going): I've closed spotify and decided to see what happens then, still kept spiking. Was working with only pages open on a paper, first time with syscallbypid.d showed only pages taking up some space, but second time and third with some spikes later other stuff started to show up. Any idea what this could be? 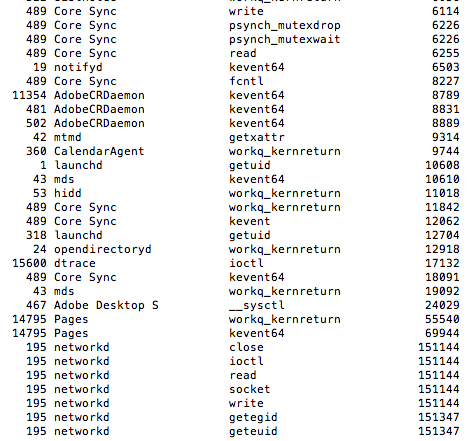 EDIT5: I've captured another screenshot of the entire screen from activity monitor to show what has been eating up most of the CPU, which is the Kernal_task. This spike happened with no other programs open, only stuff running in the background. 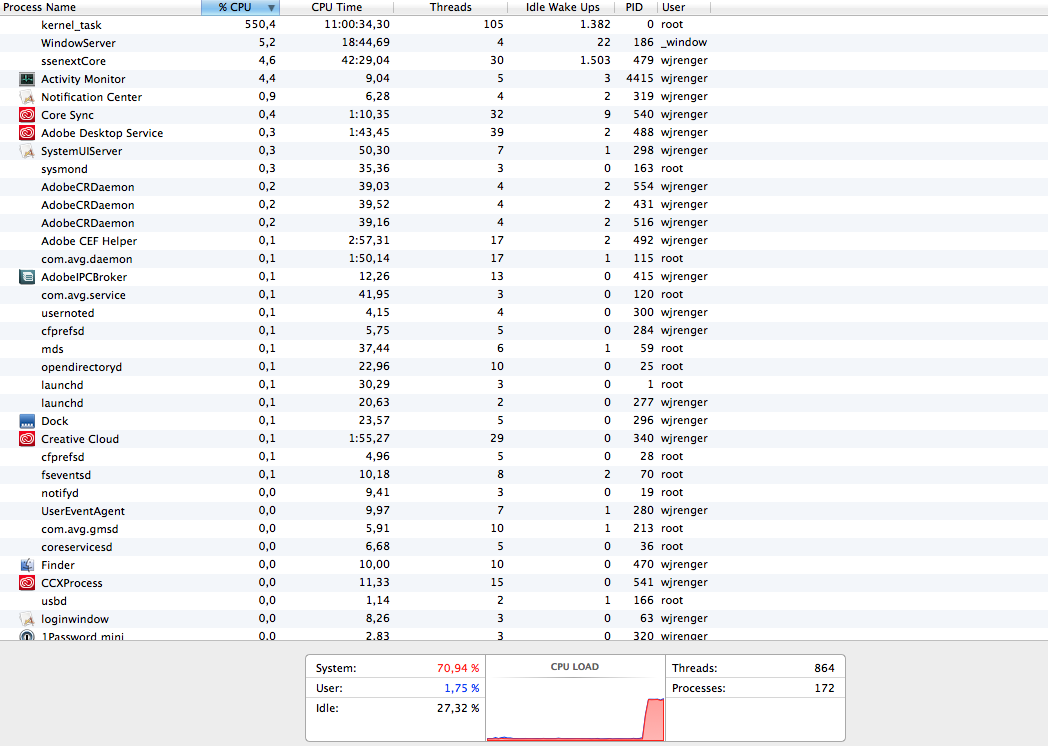 The chart representing the CPU usage in the Activity Monitor can be misleading.

The scale on the Y -axis is not 100% but changes according to the CPU usage.

You could see what it looks like spikes even if they are of extermly low magnitude.

See my example. It looks like spikes while the actual CPU consumption is low. In this case the User- CPU load is 0% to 5.93% and the chart Y-axis is set to 6% so it just looks like huge spikes.

Not the answer you're looking for? Browse other questions tagged macos performance cpu .