Safari tabs rarely restoring to their respective desktops after restarting

When I restart my laptop (or log off and back on again), I expect apps like Safari to open up and restore all of the tabs and windows that I previously had. I also expect that the Safari tabs will restore to their respective desktops—so, for example, if I have Safari windows in Desktops 1, 3, and 5, I expect them to open up with their corresponding tabs in Desktops 1, 3, and 5 again after I log in.

However, that seems to happen only about 25% percent of the time. The rest of the time, Safari dumps all of the windows on Desktop 1. This seems to be the behavior which I am experiencing as far as I can remember, since High Sierra at least, all the way now to Mojave.

In contrast, apps like Pages and Finder always assign their windows to the correct desktops.

Other apps have this problem, like Sublime Text and Skim, but since they are third-party apps I'll give them some leeway and won't hold anything on the developers. However, this is not the type of behavior I would expect from stock macOS apps.

One thing to note is that any minimized Safari windows that I have always stay minimized, as they should. The behavior I am describing only affects visible windows.

Is there any sort of way to make the restoring behavior more consistent during log in, or is that some sort of the bug that Apple hasn't fixed?

If you split multiple windows of any single app to to separate desktops with no other pre-assignment, they will all open on the desktop that just happens to be frontmost when they launch. This can feel more random at boot time, when the screen is rapidly changing Spaces to place each already-assigned app on its correct Space.

You can fix any app to any Space by right clicking its icon in the Dock, then Options > 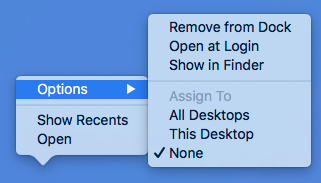 If you have Mission Control set to 'Displays have separate Spaces' & 2 monitors, you will need a minimum of 3 Spaces before these options will become available to you.

Not the answer you're looking for? Browse other questions tagged safari .

0
Cannot drag links onto existing tabs in Safari 5.1
12
How can I keep Safari from re-opening my tabs from my last session?
11
Automatically scan/cycle through safari tabs?
0
Alternate between tabs on Safari
10
iOS 8: Prevent Safari Mobile from reloading tabs by default
2
Will Safari preserve my windows and tabs across an OS update?
1
Quit Safari app automatically after closing tabs
0
Browsers don't restore tabs after quitting in macOS Mojave
0
Prevent Safari from opening minimized window