How do I repair movies with "invalid public movie atoms"?

I've got a movie file that gives me the following error every time it opens in any QuickTime based player:

The movie could not be opened.
An invalid public movie atom was found in the movie.

Is there any tool I can use in 10.5 on my PowerBook to fix the file?

And please, don't suggest using VLC; it can play the file, but it can't fix it.

Ideally I want to avoid re-encoding the streams.

I recommend using the free app HandBrake to re-encode the movie, which will hopefully fix the problem.

Open HandBrake and it will automatically ask you to select a source (otherwise, you can use the Source toolbar item). Select the problematic movie and click Open.

Make sure the Presets panel is visible by clicking the Toggle Presets toolbar item. Then, under Apple, select the Universal preset.

The default settings should be fine, but you can tweak them if you like.

Click the Start toolbar item to begin. HandBrake will chug away and re-encode the file. That's likely to fix any problems with the encoding. 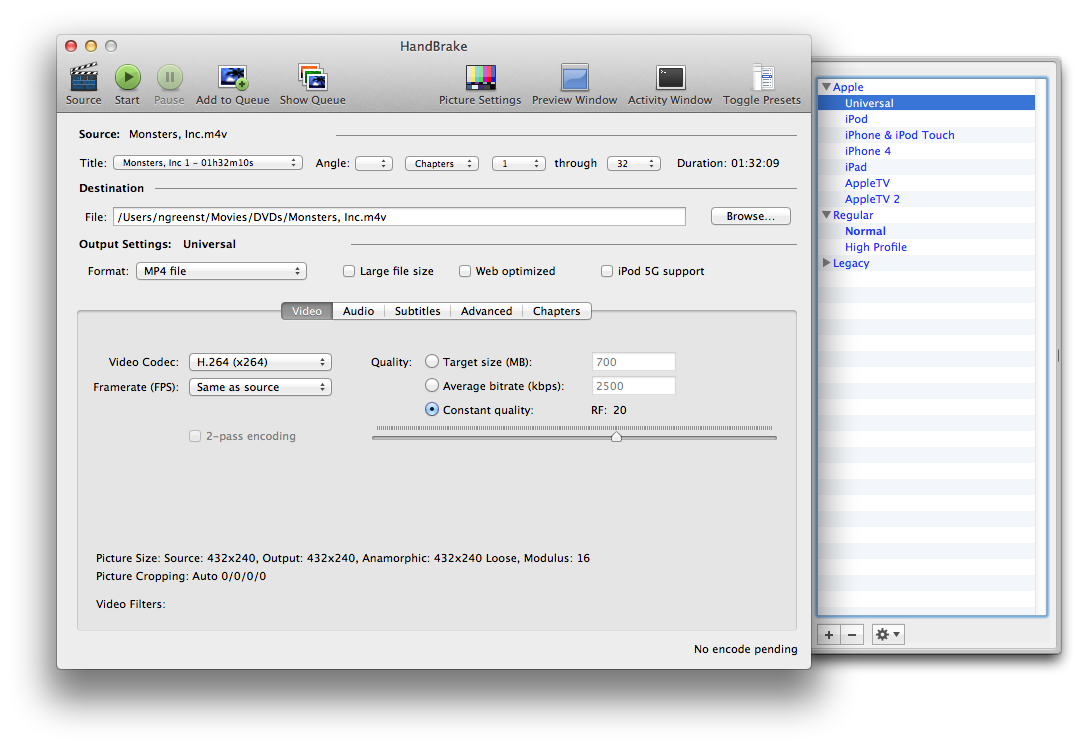 There is an old Mac app called Dumpster that allows you to view and edit Quicktime movie atoms. Ages ago I came across a tutorial online on how to fix the "invalid movie atom" problem using Dumpster, but I've lost the url and have never found the tutorial since through Google. Dumpster can still be found, I believe.

For me, it's easier to re-encode the movie or try "optimizing" it with Subler.

Okay, I found a thread that gives more detailed instructions on how to possibly fix an invalid movie atom. This one is for .mov files but will apply to .mp4 if you're using Atom Inspector. You're going to want a good file to compare to the bad one. Ideally, you want the good movie file to have been encoded with the same parameters as the bad one. If it's a torrented movie, they sometimes come with an included sample of small file size.

Get a program called "Dumpster" from Apple. If you've got a Windows machine you can only get an older/legacy version AND you'll have to register with their "Developers" group first. The Mac version is much easier to get and is much more recently updated... This app will "dump" the resource/structure of the various types that are used in a .MOV file. Things like the MooV container itself, headers for the kinds of streams included in the container, then the metadata for each stream, then the actual contents of each stream (usually packetized into regularly-spaced sections). Get to know the structure on very familiar terms, including the usual placement/order and length of each of these things. Use KNOWN GOOD files with predictable material in them as examples (and also for boilerplate for later).

At the same time, get a good HEX Editor application so you can see the direct binary/hex code in the file, unobstructed by its "formatting". Look at the SAME GOOD file in both apps and familiarize yourself with how the "atoms" are placed. Sooner or later, you'll be able to recognize the hexcode signature of a particular setting or attribute, as well as get an understanding of the relationship between the various packet lengths and the notation used to describe them. This will come in handy when you need to add dummy/filler for a bad section.

Now, try the BAD file in Dumpster. If you're lucky, it'll at least open without too much fuss and you'll be able to see SOME settings, etc. Map those to their placement in the file as seen by the hex editor (which will open ANYTHING--good or bad). Once you've eliminated the GOOD, you will have narrowed down the BAD and you be able to do a trial and error of various settings, etc. Plus you can copy and paste (from another instance of HEX editor using a good dummy file) to use as "backfill/padding" of the bad file so that it MAINTAINS THE SAME LENGTH, and DOESN'T INCLUDE BAD DESCRIPTORS (especially as regards placement and length of the streams).

After a while, you should have a playable file---with some hiccups. This can then be used as a source file in a converter/editor so you can finally be left with a regular file that only has the good stuff.

My solution is to use MP4Box to demux the broken .mov or .mp4 file into its separate audio and video tracks, and then remux them using MKVToolnix. The remuxing appears to fix the atom problem, and the resultant MKV will be playable in QuickTime Player (assuming you have Perian installed), and can also be rewrapped as a QT .mov.

I have just needed to do this, and MKVToolnix reported the following warning for the video track: "This file contains at least one frame with a negative timecode. All timecodes will be adjusted by 00:30:44.726 so that none is negative anymore." I suspect that's what was causing the public atom error.

1
Asking QuickTime Player 7 to play MIDI files through GarageBand
0
Use AppleScript to launch and manage Quicktime Player in the background
1
MP4 movie does play in QuickTime but not in iTunes
3
Play MIDI files
19
FLAC audio support for OS X 10.9
1
Playing AVI file with XviD codec crashes my VLC and doesn't play on quick time
6
How to watch a .ts video file on an iPad
2
AppleScript Quicktime Player to play audio file generates error