.smbdelete files on High Sierra server vs Save in MS Word 2016 on Mojave

I am working with a Mac mini (Macmini7,1) running High Sierra 10.13.6 with SMB file sharing to a few connected computers. Things have been working fine, but since updating a couple of the client machines to Mojave 10.14, when saving changes to MS Word documents we get a "Grant File Access" dialogue wanting to access a file named .smbdeleteAAAABBBBetc

I gather from various sources such as .smbdelete files accumulating on server share and https://discussions.apple.com/message/30046649#message30046649 that these files are the result of the SMB client software trying to be careful when it deletes a file (basically rather than delete the file, it is first renamed and hidden to perhaps make it easier to deal with multiple processes acting on the file and locking issues and stuff like that)

Apple introduced this behavior in OS X 10.10 you can find it in the source code here:

The comment above the code that does it is:

In our situation, almost every time a MS Word document is saved after a change has been made, this type of dialogue pops up: 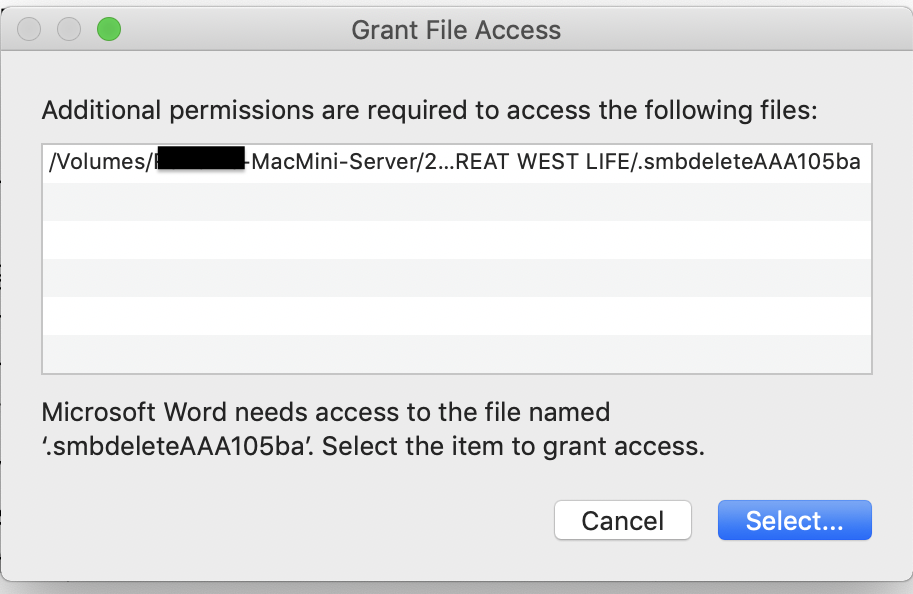 Since the .smbdelete file is invisible in the Finder and File Selection dialogues, one cannot select it if you hit the "Select..." putton. Hitting "Cancel" sometimes results in MS Word continuing to edit the properly newly saved file, and sometimes results in MS word editing the .smbdelete file, and sometimes a new File Selection dialogue pops up.

Is there any way to fix this so it doesn't happen, or are we stuck copying the files we need to work on to local storage and moving them back when we are done?

In looking for online references to this, I find lots of people complaining about .smbdelete files littering their servers, and some references to troubles when dealing with saving password protected Excel files, but no references to this specific issue. We do not seem to be have experienced this issue with High Sierra client machines.