Can not use "pathping" command in macOS

In the Windows I can use the pathping command to tail after the network path, but I can not find this command on macOS.

Is it has another name, such as ipconfig to ifconfig?

In macOS Terminal, you can use traceroute for similar functionality.

There's also a nice GUI tool called Network Utility that you can use to trace a path of your network traffic (in this example I've traced www.apple.com): 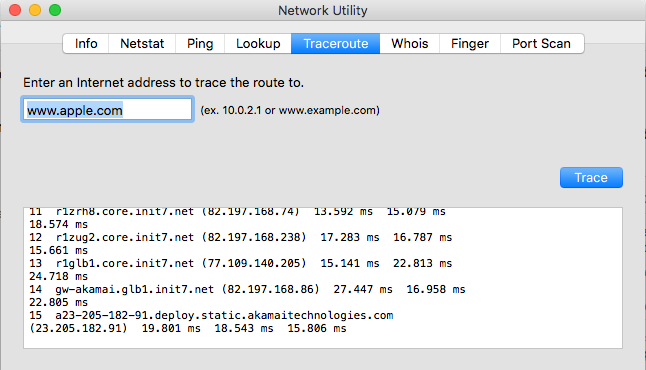 In OS X Mavericks (10.9) and later, Network Utility is in /System/Library/CoreServices/Applications.

The comparable command, mtr, can be installed with a package manager, such as Homebrew. After installing Homebrew, one can install the software as follows.

If desired, one might also make an alias for pathping. For example, in BASH...

The familiar result is illustrated below. 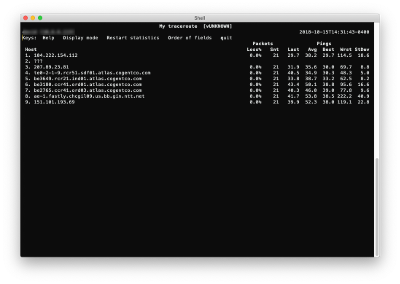 Just wanted to say that Christopher provides the most accurate answer here.

PING, is an application based on the ICMP protocol which is used to send echo packets to a destination and expecting to receive an echo response and it calculates the RTT (Round Trip Time) from when the packet was sent to when the echo response was received. Generally when using PING on a LAN network you can trust that what it is saying is accurate unless you have foreknowledge of network devices in the transit path that prioritize ICMP over mission critical TCP/UDP Traffic. This however is very common in networks that utilize unified communications, meaning voice and data on the same network. This is because QoS Policies are put in place to ensure voice traffic and other mission critical traffic is prioritized over ICMP thus indirectly affecting the RTT time of an ICMP ping test.

Trace-route is another method commonly used by technicians and engineers to diagnosis latency in the transit path however any engineer that has studied how trace-route works would know that its results are nearly always misleading.

Trace-route works in a manner similar to ping however it uses the TTL feature to make each successive hop in the transit path respond with an ICMP TTL Expired packet. Thus gives you the ability to determine which network devices the ICMP packet is traversing.

When you dig deeper into the operation of traceroute you will see that traceroute utilizes 3 probe packets for each successive hop by default unless you specify other wise. Each probe packet indirectly measures the latency between the source and the device where the TTL is declared expired. This latency calculation is a by product of its true intended purpose. Keep in mind even if you send probes to a device that is five hops away, random latency spikes in any four devices prior to the fifth hop can result in the fifth hop looking like it has high latency.

Pathping works first by doing a traceroute to the destination then it uses ICMP to ping each hop in the transit path 100 times. This is used to verify latency between the source and destination via icmp echo per each hop. But remember what I said earlier, you cannot rely ICMP when public devices are involved. So you can run into cases where you see ICMP pings destined to one hop in the transit drop 40% of the traffic whereas the next hop has 100% success rate. This is due to CoPP.

Pathping in general is a much better tool to diagnosis latency from a specific source to destination with a relative degree of accuracy. Note that I said Relative, this is because latency is ALWAYS relative to your location on the network.

You can also use the Terminal too.

Also you could do a ping too.

Network Utility is nice in that it wraps all the utilities in one tool.

I'd guess that you could write a shell script which wraps both together which it sounds like pingpath does.

Not the answer you're looking for? Browse other questions tagged macos mac .

13
command line: unmount a smb network drive
5
How do I delete network interfaces
16
Command + C does not always work on first try on MacOS
5
macOS Mojave: createinstallmedia: command not found
1
Why can I not use `sudo` as a `Standard` user in macOS?
0
Apple Script can't find executables