How to force quit Applescript app from terminal?

I wrote an applescript that turns on my lights. I exported it as an application with the name "LightsOn", and it appears with that name in activity monitor. 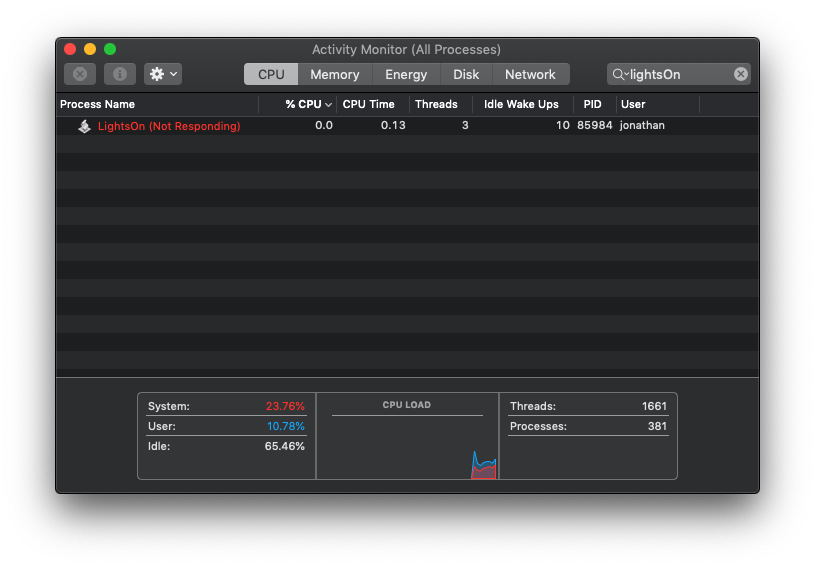 Under certain circumstances, this app gets stuck. I can force quit it from Activity Monitor, but I want to be able to do so from a script. killall LightsOn doesn't work; I'm told that no matching processes belonging to you were found.

How can properly force quit this app from the terminal? Or, how can I discover the appropriate name for killall?

The reason killall LightsOn doesn't work is because all running AppleScript application's process name is applet. For example, the executable path is:

In general and assuming the process(es) is(are) not hung, one could use killall applet however that will terminate all running AppleScript applications, and of course that may not be desirable.

When a process is hung, you'll need to use a KILL signal, e.g.:

However, pkill is the way to go to easily target a specific AppleScript application and because it's hung... use a KILL signal, e.g.:

Note in this instance, -9 is just another way of saying -KILL.

Now with pkill and using the -f option, one can use more of the full argument list, e.g.:

Then there's no ambiguity as to which applet process one is targeting. One can use as much of the full argument list as one feels is necessary to target the correct process.

For example, pkill -9 -f LightsOn will terminate an AppleScript application named NoLightsOn, so always use enough of the full argument list to terminate the correct process.

From the pkill man page:

From the killall man page:

Note that this is just a partial signal list and is used with many of the different utilities that can terminate a process. See the various manual pages of the utilities used for additional information.

That should show you the matching process information.

You can also try pkill which should work like this:

If that shows you the PID, then you can move on to pkill:

When you run pkill -9, you're not telling the application to terminate itself, instead you're telling the OS to stop running the program, no matter what the program is doing.

When app gets stuck sending the kill without specifying the signal #, it will automatically assign to it the signal <15>, which means asking the app to terminate it self, it can not do that while stuck.

2
Applescript to quit all active browser processes
0
Applescript, quit app if other app is quit
0
AppleScript from Terminal unrar command
1
Process not running but app shown in dock
1
How to quit “Force Quit Applications” using AppleScript?
1
Disable Force Touch from terminal using Bash or AppleScript
3
Why does telling an app to quit sometimes leave a zombie, and how can I kill it?
3
How to force quit an AppleScript script launched from toolbar?
2
AppleScript to quit Transmission App