Is there a way to open separate instance of chrome where CMD Q doesn't close all chrome windows?

I'm using MacOS 10.13.6 (High Seirra) I was reading through some ways to launch new windows of Chrome on macOS and keep running into the same problem; How can I launch multiple instances of Chrome where CMD+Q doesn't close all of them?

Perhaps my understanding of what this action does is incorrect? I have been under the impression that when I use CMD+Tab each icon displayed is an instance of that application.

which seems to open a new window, but I still only see one instance of Google Chrome running in the Activity Monitor. 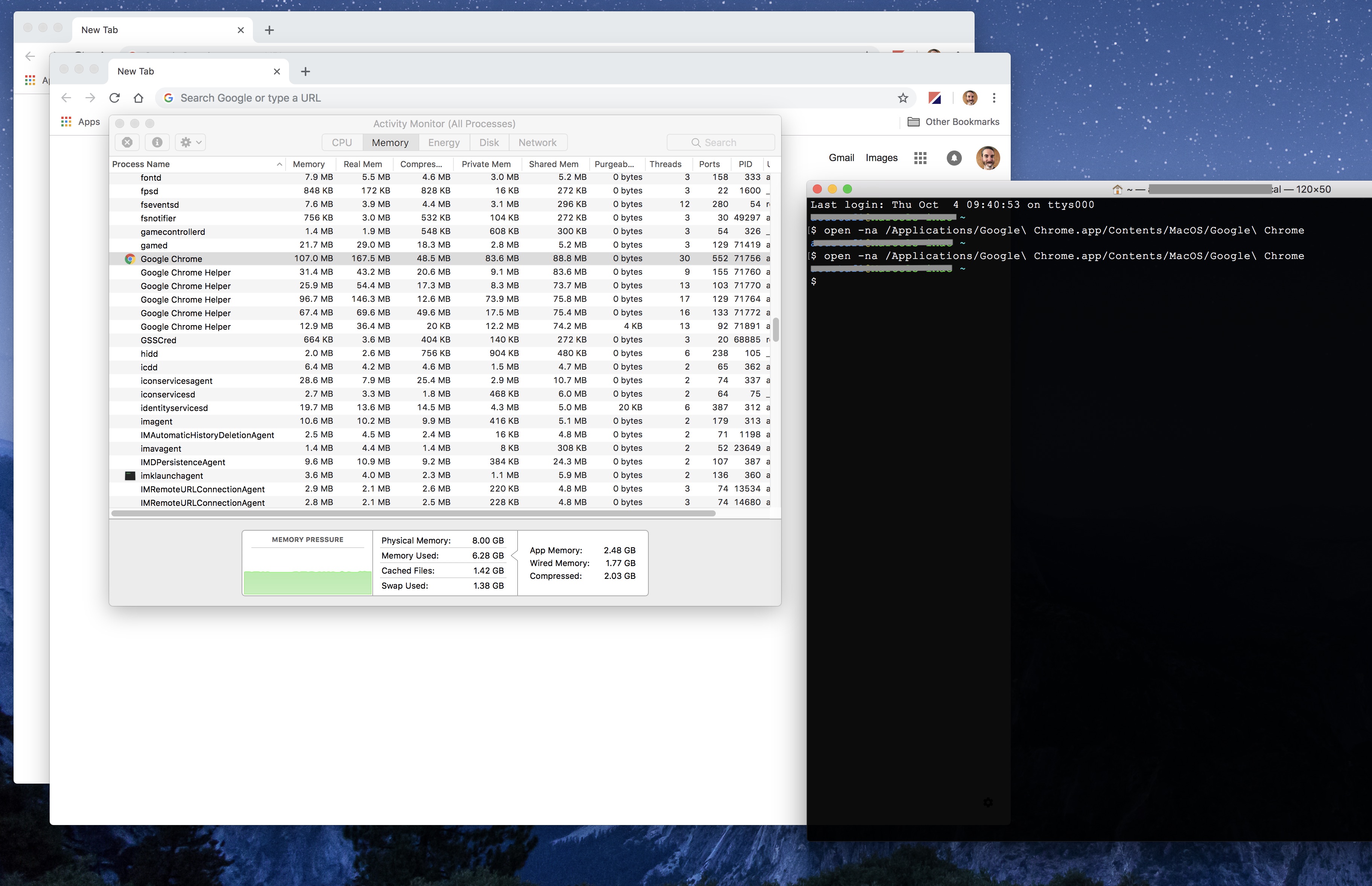 I found an answer from 2012 that suggests the only way possible is to literally copy the application which I can't believe is still true today. Especially since I want to be able to several instances at a time.

Ultimately I want to be able to work in one chrome environment while utilizing another independently. So site data, cookies, passwords aren't shared and if I close one the other is still going

Chrome has this feature built in; it's called People or Profiles

With profiles, you can keep all your Chrome info separate, like bookmarks, history, passwords, and other settings.

Profiles are ideal for:

The detailed step by steps are included in the link, but to summarize:

I know exactly what you're asking about, and I've been through the same problem.

Multiple profiles solves most of the problem you describe, but in my case, I need two different instances of chrome where, as you say, CTRL-Q would affect them separately. Essentially, this is the situation where I would usually just use Chrome for one purpose and Firefox for the other, but I just happen to be using a Chrome-Only app so I have no such options.

In my case I need also separate access to the separate instances from outside apps for audio input/output.

This is not a "fun" solution, but for the past few years, I've been using a (custom-compiled) instance of Chromium as my "secondary" instance of Chrome, so that MacOS considers them completely different apps, and I can customize the Chromium compile to do specific things I want, as well.

Again, the process of compiling/customizing Chromium was not fun (or fast) in the least, but if I understood you correctly, "two profiles" isn't enough unless the Mac sees the two browsers as "two completely different apps".

That technique is the only thing that has worked for me, but it's worked for many things including some fairly complicated audio work, where the Mac treats them as completely separate applications, for a couple of years now. For instance, I can log in "twice" as two completely separate users for podcast purposes, where one instance of Chrome is using audio interface A, and the instance of Chromium is using audio interface B, and Ctrl-Q on either one has no effect on the other one.

Caveats: your open-source compile compile of Chromium will lack some codecs or... DRM-something... or whatever, so some video content will be difficult or impossible to access, and you have to be pretty careful to prevent the Chromium install from stepping on (or just getting "confused" by) the user data of the "real" Chrome.

I hope I heard the problem and that helps a bit, or if you've found a better solution any time since this slightly old question, I'd love to hear about it.

Not the answer you're looking for? Browse other questions tagged high-sierra google-chrome .

43
Is there a simple way to have separate dock icons for different Chrome Profiles?

2
How does one find the plug-in setting on Chrome for Mac to aid in stopping Chrome Helpers processes from running?
2
Any way to launch a separate instance of Google Chrome with a custom icon?
87
Clicking on external links opens Chrome but not the link
0
Creating desktops and opening programs on those desktops using applescript
18
Why is "Hide Others" keyboard shortcut missing on macOS Chrome?
0
Automator: Applescript - Open a specific Google Chrome profile and use extension