Before I upgraded to Mojave, I was on High Sierra and I had an issue with the way the media keys worked with iTunes. Most people complained that whenever they had iTunes playing in the background and they played any sort of media, usually a video in Safari and they tried to pause iTunes so they could watch the video, they found out that the media keys interacted with the video instead of iTunes. Apparently this was a High Sierra feature that enabled the media keys to be used to control any media playing system wide.

In my own case, it was worse, the media keys couldn't control iTunes at all, even while I was in the iTunes application and I tried to pause a song or go to the next one, it wouldn't work AT ALL. Multiple restarts never fixed this. I don't even use Safari usually for browsing, I use other browsers and the media key doesn't control media that plays in them. Anyways I fixed the problem with High Sierra media key enabler application that everyone seemed to be using, unfortunately it couldn't work with bluetooth devices which I use often, only physical media keys, so if I had to interact with iTunes I always had to reach for my computer.

Fast forward to me installing Mojave, I did a clean install to avoid this problem in Mojave. I was delighted at first when I booted up Mojave, pressed the play button, iTunes started up, and I added my songs and found out that the media key controls them fine. I usually use the iTunes widget in the Notification centre a lot and was unhappy to find that it was nowhere to be found in Mojave, only the "Now playing" widget, and I soon discovered that this annoying feature followed me to Mojave. Using quick look (pressing spacebar) to preview a video, if I tried to pause iTunes so I could watch the video, I found that the video instead was being controlled. Usually I would swipe into the Notification Centre and pause iTunes from the widget, but imagine my surprise when I found out that the "Now playing" widget was showing controls for the quick look video. This is quite infuriating.

The situation has now escalated. My media keys no longer control iTunes at all, even when I'm actively in iTunes trying to control a playing song, nothing happens. And even worse, the Now playing widget shows nothing: 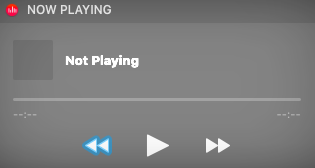 It shows that when an iTunes song is actively playing. Now I have to go into iTunes and click the next buttons to change a song. I would have loved for this to work properly as High Sierra media key enabler doesn't work with bluetooth controls.

Now, whenever I restart and I press the play button, iTunes starts up, pressing play again in iTunes does absolutely nothing. I would have to press spacebar to start a song playing. When I leave iTunes and continue doing something else and try to change the song, of course nothing happens and the Now playing widget is empty. But then after using my laptop for a while, I then notice the media buttons start to work again, when I check the notification centre, the Now playing widget shows the playing song.

It almost seems to me as if the Now playing widget determines what the media keys control and what it doesn't and it also seems it takes a while to pick/catch the current playing song. I use iTunes for basically most of the day and if anyone has any solution other than High Sierra media key enabler, I would really appreciate it.

I went through almost exactly what you went through. I fully reinstall Mojave with no luck, so just downloaded the Media Key Forwarder (note: it's no longer called Media Key Enabler). I recommend it until Apple fixes their 'unified play'/'Now playing' mess.

Boot into safe mode (hold shift as you press the power button, or click here for instructions). Start iTunes and the play buttons should work, then reboot normally and enjoy life.

Not the answer you're looking for? Browse other questions tagged itunes keyboard music mojave .