After upgrading to Mojave, my rsync based backup script run via a launch agent in ~/Library/LaunchAgents, could no longer read some directories in ~/Library.

I've spent a few weeks trying to sort this out. I agree that the currently accepted answer is not really a solution -- it's not much better than just disabling SIP altogether.

Update 20190226: As detailed in the Restic issue linked below, this seems to have stopped working. The original binaries I created with this method continue to work without errors for some strange reason, but I can't give access to new binaries directly using this method.

For Step 1, you can easily package your script as an app by using tools built into MacOS such as Automator.app or Script Editor, or Platypus also works.

Example contents of such an app might be a simple AppleScript (in Script Editor) such as:

From Script Editor, use the dropdown in the save menu to save as an application, then CLOSE SCRIPT EDITOR.

NB: If you didn't save and close Script Editor prior to adding to FDA as instructed, it seems that some kind of invisible process (automated background saves?) will change something (some kind of timestamp or hash?) that is required for Full Disk Access, which can some intermittent errors that were a major headache to figure out. So if you didn't do this, remove your app from FDA, save and close Script Editor, then add back to FDA.

If your backup script needs root access (e.g. to back up root-owned 0600 files), you're in for another set of hacky workarounds, since /usr/bin/open won't seem to run anything as root (even if you specify the UserName key in in a root-owned /Library/LaunchDaemons/ plist. (I'd be happy to open this as a separate question if appropriate, since I think the below workaround leaves much to be desired.)

One option for this is to add with administrator privileges in your AppleScript, but this requires manually typing in your password, defeating the purpose of automated backup. My current workaround is to:

After some preliminary testing, it looks like a slightly less hacky workaround is to compile a binary (using a compiled language) that calls your bash script. Add that binary to FDA and it seems to work. Add to the root-owned /Library/LaunchDaemons plist, and you have a way to call it from root without all the craziness above.

For security, I sudo chown root and sudo chmod 0700 the resulting binary before adding to Full Disk Access (although admittedly an attacker could just change the bash script that this calls if it were left unprotected).

The mistake I made was that the launch agent ran the script like this:

The currently accepted answer is a bit hard to follow with all of its updates. Here's a short summary of what currently does and doesn't work, plus a new tip.

Adding scripts or binaries to the "Full Disk Access" list no longer works. The only thing that works is adding an actual macOS app. As Channing mentions, Automator.app, Script Editor, or Platypus can be used to create one.

Had the same issue on macOS Catalina trying to schedule Borg backups.

I then exported the app to /Applications/borg-backup.app clicking "File" then "Export..." choosing "Application" for "File Format".

The first time the launch agent ran, a prompt asked me to grant borg-backup.app access to ~/Documents.

I did some more testing and can't seem to give any normal† program full disk access anymore. I wrote a minimal shell script [1], a minimal binary calling that shell script [2], and a binary trying to access a secure location [3]. I then gave all these scripts/executables Full Disk Access, and also to /bin/sh for good measure. Calling any of these directly via the shell gives me an error.

I then stumbled across an Apple dev forums discussion about The Rules for Full Disk Access. It looks like you need an app bundle to give Full Disk Access permissions, which explains why granting full disk access to a terminal app enables that app to call ls ~/Library/Mail successfully.
However it does not explain why you can grant access to /bin/bash and then use that in your launchd.plist file to have full disk access in your shell script.

† simple binary, not an App Bundle living in /Applications

My initial response, which turned out to be wrong:

The next time launchd launches your script it will have full disk access and pass these permissions on to any sub-processes it spawns – like rsync in your case.

This works for any executable you want to launch using a launch agent. Just add the executable (given as value for <key>Program</key> or the first value of <key>ProgramArguments</key> in your plist file) to the list of programs having full disk access.

A new way to address this: LaunchControl now ships with a helper called fdautil that you can whitelist, and then run commands using fdautil exec. It will only allow commands you've whitelisted via LaunchControl or fdautil set.

There's a bit of info about it at https://www.soma-zone.com/LaunchControl/FAQ.html, and more details in the app's help window.

I faced a similar problem. For now it seems that I managed to get my backup.sh script to work properly through launchd by removing the .sh extension and making the script executable

Then I can add the script through the Full Disk Access dialog. From the .plist file I call /path/to/backup directly (i.e. without /bin/bash). Don't forget to add #!/bin/bash at the beginning of your script and to reload the .plist file.

I am having the same issue with some copies that I trigger through launchd that use ditto. Trying some tests too see what I can minimally add into Full Disk Access to get it to work. For bash scripts I'm wondering if you might be able to create an AppleScript application and use that to grant the access and call the script. It may give you a way to grant access to that specific application and avoid granting access to all things that you might run through bash

If you're not committed to using LaunchAgent, a simpler option is to run your script from your crontab, and add /usr/sbin/cron to System Preferences → Security & Privacy → Privacy tab → Full Disk Access: 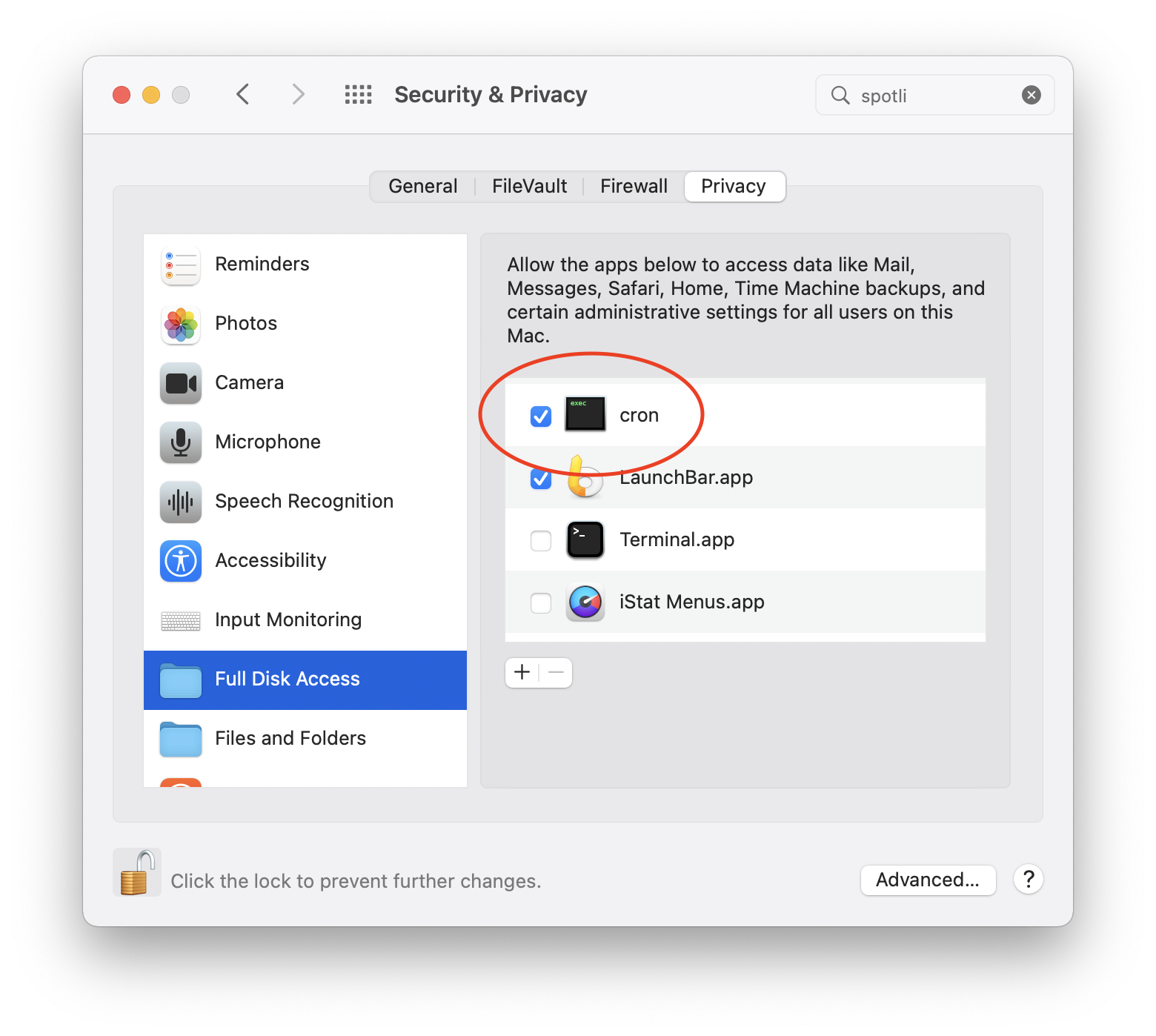 On macOS 12.1, this gives my backup script (run from cron) full access to everything in my user's home directory.

I believe this is still secure because commands executed by cron have to be added by you (the crontab files in /usr/lib/cron/tabs/ are protected by SIP). When I edit my crontab (via crontab -e) the OS prompts me if I give permission for the changes to be applied.

If you want to execute your backup script manually, in the terminal, you may have to add Terminal.app (or iTerm.app et al) to the Full Disk Access pane. This seems less secure because any command run in the terminal would then have full access to your disk (I would appreciate if anyone can confirm this).

Not the answer you're looking for? Browse other questions tagged launchd sip .

0
rsync "Operation not permitted (1)" error only when run in launchd
16
What and how does macOS Mojave implement to restrict applications access to personal data?
4
"Full Disk Access" for backup tool running as cron job
0
Run Shell Scripts on a Schedule
1
rsync errors, but only when run in launchd
0
Can't use System Events when using Launch Daemons and Agents
1
Enable/load .plist issue after Big Sur update
0
Give the Terminal.app Full Disk permission problem even it is given