How to automatically trigger a iOS Shortcut (based on location/calendar)

I've done a lot of research and it looks like the only way to run Apple iOS shortcuts is manually - i.e. you have to manually do the trigger - either by pressing a button, getting Siri to do it (by 'manually asking') or by (manually) getting another app to run it. I've yet to be able to get another app to run it automatically (yes, I'm sure this is to do with security/privacy implications, but if it's based on a shortcut that's only on my phone, then I'm happy with the security/privacy).

I've looked at getting IFTTT to run the trigger (which it can do - for example, based on my location, or based on the start of an event in my Google Calendar), however the 'most' I can then do is to get that trigger to run an IFTTT Rich Notification on my iPhone - yes I can then click on that notification pop-up (which launches a shortcut via shortcuts://open-shortcut?name=[name]), but that still relies on me clicking the shortcut.

A couple of people have run iOS shortcuts as the trigger for an IFTTT action, but I'm trying to do this the other way around.

So what I'd like to be able to do is this:

Unfortunately this is not possible (yet). It's a known limitation of Shortcuts in its current 2.0 implementation.

Federico Viticci mentioned this in his (epic) iOS 12 review as something he'd like to see in the future:

I was looking for the same thing, but I believe that running shortcuts automatically without user interaction is not going to happen anytime soon in iOS.

Since I never really liked how the workarounds felt like, I solved this problem for myself and made an app called Pushcut that integrates push notifications with shortcuts.

You can run linked shortcut with one tap on a notification, or define multiple options as actions. Not "automatic in the background", but as close as you can get with iOS.

I use it mainly with my openHAB home automation and IFTTT webhooks - but it is quite versatile. I hope somebody else finds this useful too. 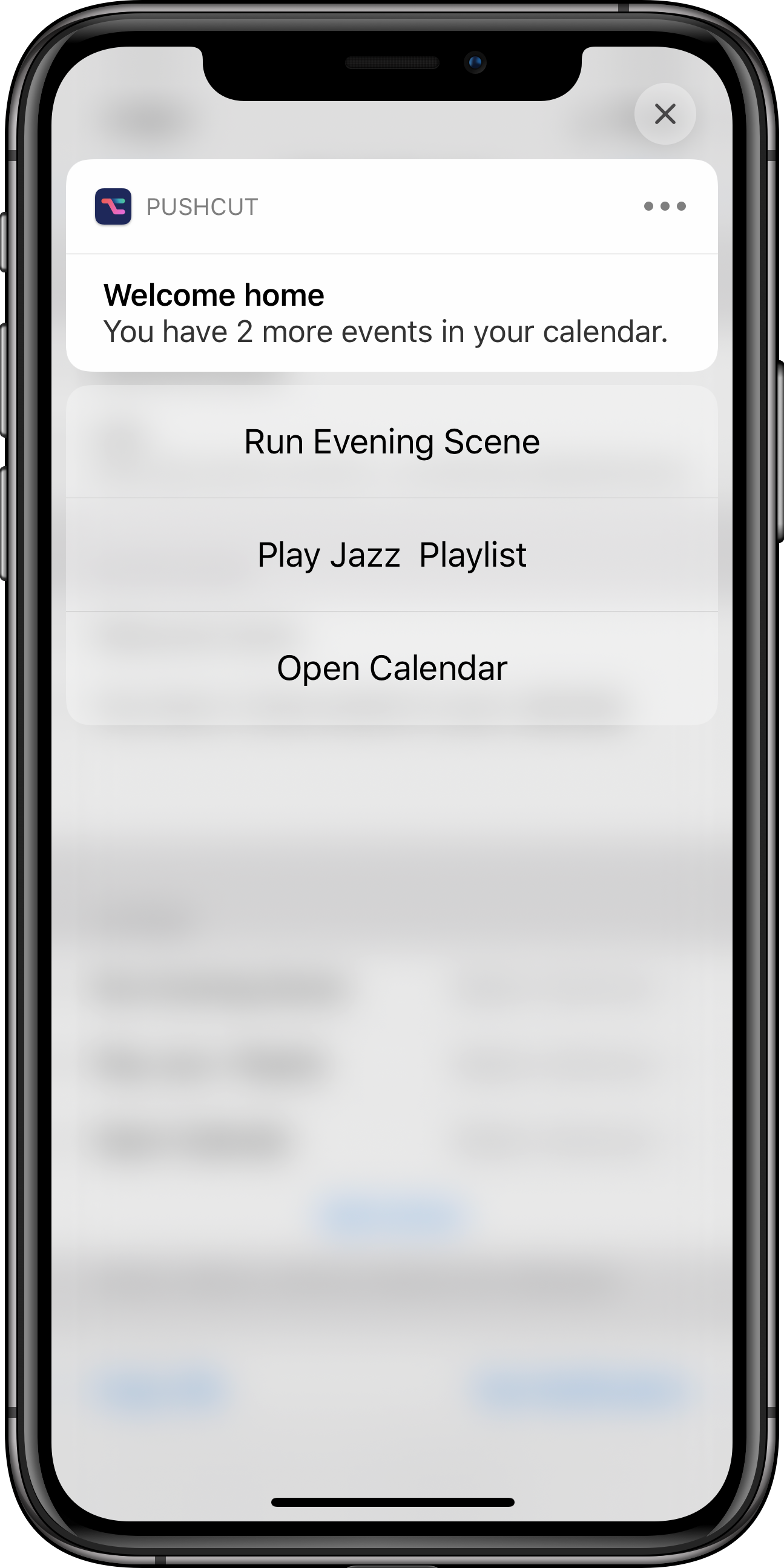 After updating to the iOS 13, you can open Shortcuts (it's now installed by default). On the bottom menu there is a tab called "Automations". There, you can set triggers to start actions, just like normal shortcuts.

There are both triggers for location or date/time related events.

I guess the best for now is, that you can add your own shortcut as a reminder. Then when it appears on the screen just tap on it and it will execute whatever, but it still requires some interaction.

I was also trying to make the Shortcuts work without my manual input. I think due to security reasons Apple will not allow triggering Shortcuts without user action, though that's not specified in their iOS Security Guide. I've tried repeat and wait commands, but the shortcut stops execution if you turn off the screen.

There is a lot to do with Shortcuts app is it is, more integrations and apps to be added, stability and performance improvements required, so I think Apple will continue to work on the app itself and may add this feature much later.

Have you tried instead of this:

Launch Center Pro allows you to set locations triggers for actions. Use the Workflow/Shortcuts Action to trigger a shortcut at a location or certain time. It’s not quite what you’re looking for as it still requires tapping a notification, but it might work for you in certain situations.

This is the list of automation triggers scheduled to be released with iOS 13 for the Shortcuts app. It's a long and useful list that covers up most of automation scenario.

It appears that you can now trigger events when you leave or arrive or leave a location. Check the Shortcut gallery.

You can use an app called "launcher pro" that will trigger a shortcut based on location. So long as the location is setup within launcher pro.

Not the answer you're looking for? Browse other questions tagged iphone ios shortcut siri .

1
Is it possible to bring up or tear down an iOS OnDemand tunnel based on a site accessed by mobile device?
3
iOS location based reminders not working accurately
2
How to disable Location Services using Siri?
3
Wrong carrier name
5
iOS 11 Safari: How to pass user/password in URL for Basic Authentication?
2
Location Based Alarm on iOS
1
Persistent location-based reminder
1
Trigger iOS Siri shortcut from a Mac
1
How does google maps know that I've taken pictures?