I am facing an odd issue on macOS High Sierra 10.13.6. My wifi connection within the office is really messy now. Before I didn't have any issue for a few months. Furthermore wifi works perfectly fine with other networks.

There are 3 things happening periodically.

1) I am losing internet connection, but the laptop is still connected to wifi.

I was pinging 192.168.1.1 and everything seems to be fine, and then all of the sudden I start getting timeouts:

2) Laptop is disconnecting from network and reconnecting in few seconds

3) Laptop seems to be connected (but now internet available), however when I click on wifi icon, I can see only 1 network (the one I am using) and no other network. After turning it off and on I can see 5-7 different networks

Unfortunately, the issue still persists. I am running out of ideas... I thought that the adapter could get broken but it works fine with other networks. On the other hand, I am the only one in the office facing this issue along with router so doesn't seem like router issue either.

Any ideas how to troubleshoot it?

I would try again after a Safe Mode (restart holding Shift ⇧) and see if the results are the same. Also, could you try using Ethernet to gauge the difference? Is this a laptop? If so, is there a case which could be removed? Any new equipment nearby (ie an electric fan, metal filing cabinet, etc.) which could be disrupting the signal? If it is a laptop, it is entirely plausible that the internal antenna has come loose or damaged (any repair or upgrade work carried out?).

First thing I'd do is test the environment.

You might need your IT department to help you with some of this, but you can investigate for yourself first & show them your results.

My Mac is well out towards the back of the building so can only see a few access points from here, unlike at the front where there are over 50 visible. I'm working from here to make all the following simpler to follow. 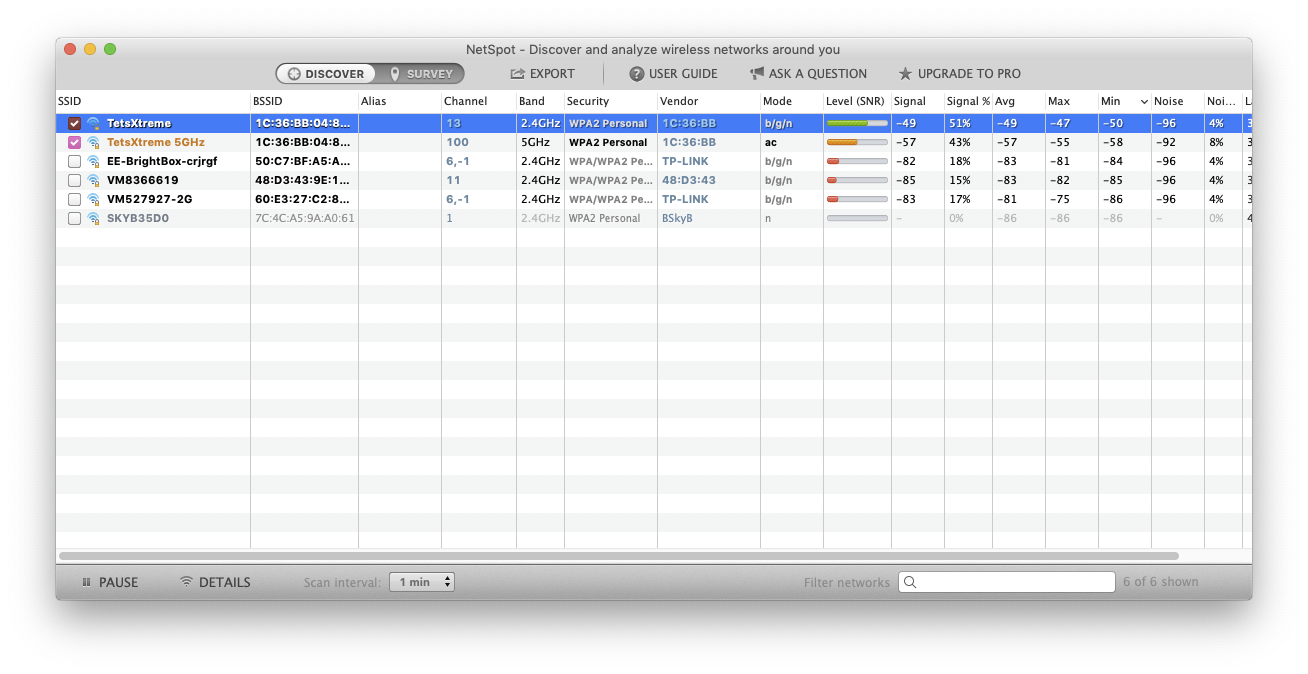 Open the pic in a new window to be able to see detail.

OK, the two top devices are mine, TetsXtreme & TetsXtreme 5GHz. This is a single device, but I have intentionally separated it out into distinct access points because the 2.4GHz band is very busy around here [there are another 40-odd APs visible from the front of the building, but I've used this location to keep things simpler.]

First thing you'll notice is the signal strength on the 2.4 is by far the best; however I mainly use the 5GHz because it has no competition at all - it's the only 5GHz AP in the entire area so I get the whole 5GHz band all to myself.

Should any device have to use the 2.4 - it penetrates further than 5GHz so can come in handy sometimes; or for devices not capable of 5GHz.

The next thing we need to do is check what channel my 2.4 is using... ch 13.
This is only available in Europe; the US has ch 1 - 11 only.
Now, one thing about the channels is that they overlap - I have no idea why someone decided this was a good idea, but that's the way it is.
The only truly clear channels are 1, 6 & 11 - all others overlap & therefore can & do interfere with each other.

This means that we will predominantly find other devices on 1, 6 & 11. I put mine on 13 a) because I can, no-one else is using it, even if it slightly overlaps with 11 & b) because even the other device I can see on 11 is so faint that it's hardly going to be any issue.
Channel 6, on the other hand, is choked with devices all interfering with each other. Avoid 6 like the plague in this instance.

So, armed with this information about your surroundings, you can see whether your WiFi Access Point is strong & in the clear for channel-clashes.

That would be the point at which you might need to go see your IT department & show them your findings; get them to move the AP or change channel, or even separate out the 2.4GHz from the 5GHz so you can choose which is best, rather than have it automatically assigned.