A new security feature in Mojave revolves around a system dialogue that prompts you to grant access to apps that want to control other apps, such as Finder (I'm finding frequently happening with some apps like Epichrome):

Is there a known way to disable this or to allow certain destination (controlled apps) to always allow such activity?

I do believe that this behavior has changed markedly from the previous OS releases with regards to just using the "Accessibility" tab to simply allow an application to make system changes.

Here is the new panel: Adding my personal Applescript apps to this list (in addition to the existing Accessibility list) has made the prompts disappear.

Update 9/26: Upon a couple days of further use, this seems to work sometimes, but not consistently. 🙁 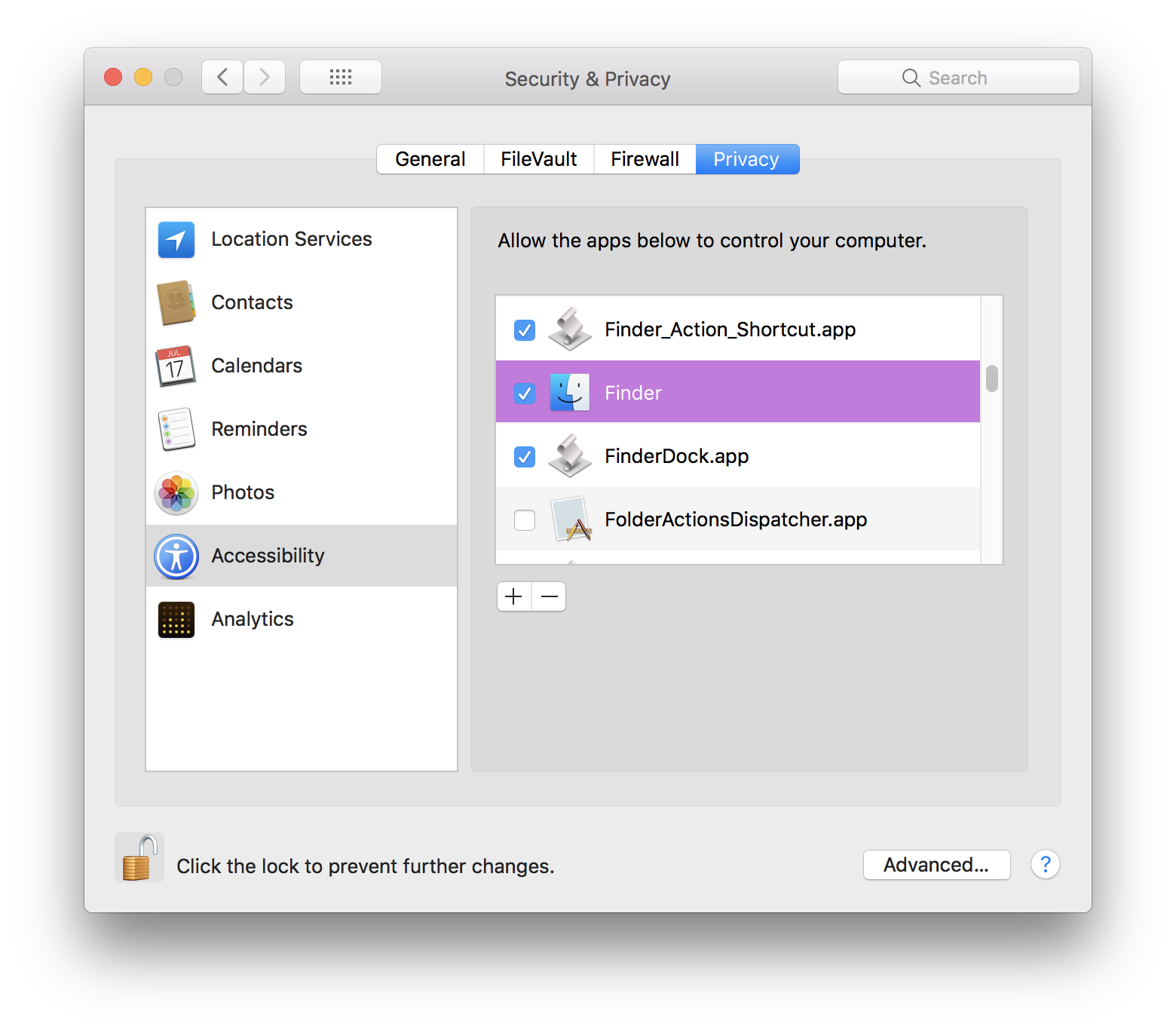 We have the same issue one user is being prompted for authorisation for "BASH" to run and "RC", The problem is we are unsure of the origin of the apps.

After poking around in activity monitor I've found whats using them and have allowed them to run the pop ups haven't reoccurred since.

The answer to the "Permanently grant right to control another app to Apple Script App" Q&A solved this exact issue for me in Mojave:

Lock the file/script/application being executed.

Instant fix for me, no more prompts!

In the past we've used the following terminal command to give the user the ability to "Allow apps from anywhere" and this eliminated the need to add apps to Accessibility:

That has worked great with Sierra and High Sierra but this new Automation tab in Mojave (installed public release today) seems to be working differently. Even with the above terminal change we are being prompted to allow all of our apps to control Finder and System Events. Though, I've found other code signed applications, like Adobe Bridge, have to prompt with this same message as well. Not sure if there is a way around it.

I'm hoping that accepting each dialog once will prevent the message from appearing again with future app updates that we send out. Will be testing that out now. Otherwise will have to test out the developer/code signed route.

Not the answer you're looking for? Browse other questions tagged finder applescript script mojave .

16
Edit TCC.db to bypass "'Foo.app' wants access to control 'Bar.app'" on own machine
2
How can I add a web link to Launchpad?
2
Permanently grant right to control another app to Apple Script App

12
What happens with the appearance of the folder icons in dark mode of macOS Mojave Finder?
10
Mojave: Finder can't load any thumbnails. Even after reinstall the system
16
Edit TCC.db to bypass "'Foo.app' wants access to control 'Bar.app'" on own machine
1
How do I control the image display duration in the Mojave screensavers?
4
“SIMBLAgent.app“ wants access to control
0
Disable Thunderbolt ports in macOS Mojave to mitigate the Thunderclap vulnerabilities
1
I have disabled SIP, I have read/write permissions with terminal, but not with Finder. What causes this?
2
How to always allow any app to do anything / disable Security & Privacy authorization dialogues
3
"Google Chrome wants access to control Finder", should I be worried?