Function keys stop working after a while in Mojave

I've tried killing SystemUIServer and letting it restart, but that doesn't seem to work. The only solution I've found is to reboot the computer.

The only keys that don't do anything are brightness, keyboard backlight, volume, etc, the ones that show a slider on the screen. The mission control key still works (enough, even though DB6 broke it horribly), the Launchpad key still works, media keys still work...

Is there a way to fix my function keys without a reboot? Rebooting can be extremely cumbersome at times and a huge inconvenience.

I have a normal, physical keyboard (thank god I don't have a touch bar), with physical function keys. Most of the controls work, and the ONLY controls that DON'T work are the ones that trigger sliders like the following to show on screen, which are the brightness, illumination (keyboard backlight), and volume controls:

My build number is 18A371a. When these keys stop working, some other things stop working as well, such as About This Mac, the sleep/restart/shutdown controls, the Messages app, as well as some other things. It really seems like some critical process is crashing, but I don't know what to restart.

Update: I found which process is crashing, and I have submitted a bug report to Apple: 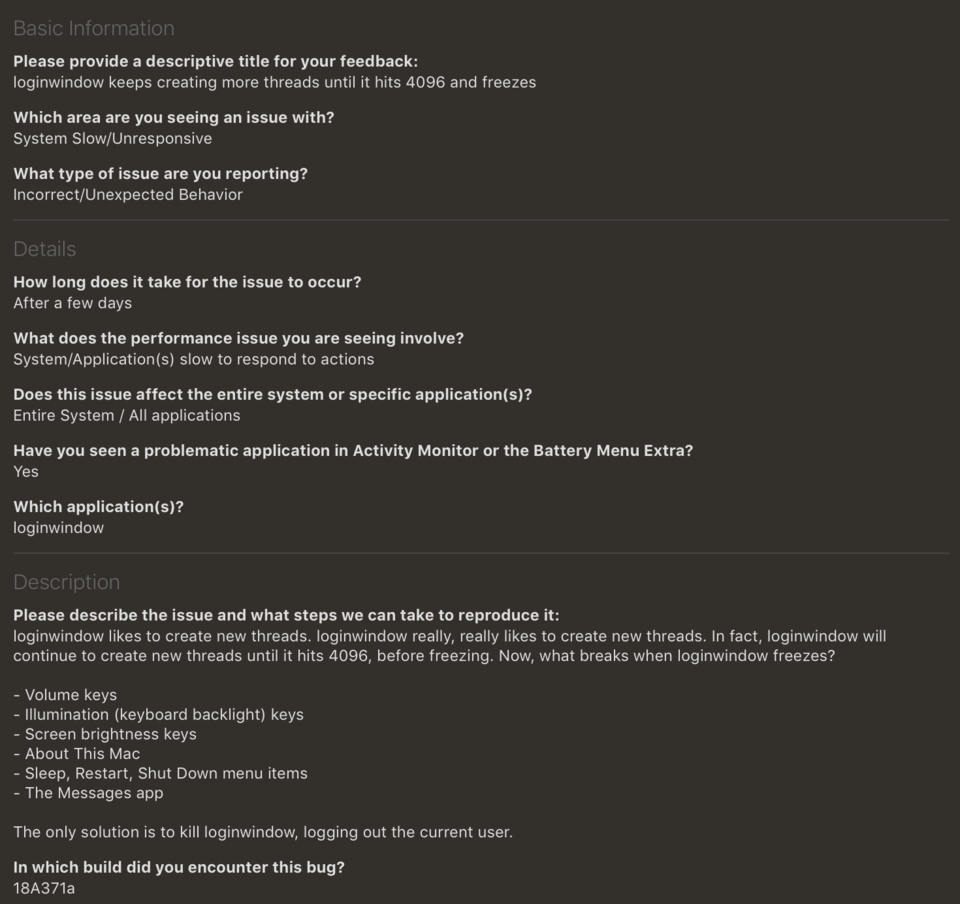 It seems like loginwindow likes to crash sometimes on Mojave, so this may be your issue.

To fix it, you'll need to kill loginwindow using Activity Monitor. It will log you out, but should hopefully fix the issue. You can also use this terminal command:

Also, if you are running any code injector, make that the first thing you shut off. It seems obvious, but it's happened.

I would try just logging out to see if that restores the process that handles function keys. Be sure to run sysdiagnose right after you restart and then once when you find the keys not responding, since Apple would surely then be able to fix whatever process is crashing if you can document it during the beta process with evidence captured in the system diagnosis.

If you're looking to track this down, try to determine if the failing process is user level or system level. Knowing that will help you with the quickest fix and help apple fix this in code for a next build.

Not the answer you're looking for? Browse other questions tagged beta-seed-program mojave keyboard .

1
Why does loginwindow keep freezing in Mojave?