How can I get the last logins/shutdowns/restarts located on a volume from another Mac?

I'd like the last command to display login/logout information located on a volume from another Mac. I've mounted that volume at /Volumes/1013.

Where does last get that information from? I'd rather open the relevant log file and read it directly than use Terminal.

Image added as answer to user nohillside below: 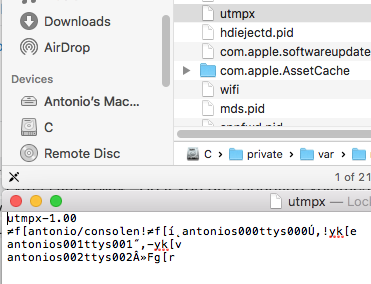 Solved by Jaume (details below), basically:

last gets its information from /var/run/utmpx, a file that records user and tty sessions, shutdowns and reboots on the current system. utmpx is a binary file, which means you can't use less or grep to read it or search for keywords.

So to get the session information of the other Mac, we want last to read /Volumes/1013/var/run/utmpx.

Unfortunately, last can't be told to read a file different than /var/run/utmpx, but this is where chroot comes to the rescue. chroot takes two arguments, a path and a command, sets the command's perceived root directory to the specified path and executes it.

In our case, this is the command we need (type your login password when asked):

You can pass options to last, if you wish, or pipe the output to grep for more relevant results, for example:

If the command above doesn't work (for example, you get a segmentation fault), try this:

that is, run the executable from the other Mac.

Note that there's a limit on how far back you can go with the macOS version with either method.

For example, with macOS "Sierra" 10.12, last worked as expected, while with OS X "Mavericks" 10.9, last only prints one line and then hangs. dtruss shows that a serious incompatibility is the reason for the hang:

You can overcome this limitation by plugging the drive to a Mac running an older version of macOS.

For more information on chroot, run man chroot in Terminal.

According to man last the relevant information is read from the utmpx file which (see man 5 utmpx) is stored in /var/run/utmpx. So if you are mounting volumes from another Mac on your network and the /var/ hierarchy of said Mac is accessible through the mount point you will find the data in /Volumes/1013/var/run/utmpx. Because utmpx is a binary format you would need to write your own little program to read it though (see man endutxent for the relevant access functions).

You could also try to use the -h host option of last to read the entries directly over the network (probably requires remote login to be enabled, never have used this and don't have a second Mac right now to try it).

Not the answer you're looking for? Browse other questions tagged logs .