Location Based Alarm on iOS

Yup. I fell asleep on the train and missed my stop. So next time I was smart and thought that I would set an alarm. Then I went to sleep with the alarm set for 6:09 instead of 8:09. So I missed the train stop yet again. Let me reiterate: smart.

Instead of dealing with setting an alarm for a different time every time I get on the train and then either waking up early (because the train, as we know, is always late), forgetting to set it, or setting it for the wrong time.

I am looking for a location based alarm app. I know that location based reminders in the Reminder app already exist but they only show up on your screen and don't make any sound when silent is on.

I need an app that will be similar to the default Clock app alarms that will sound even if the phone is on silent. Additionally, I would like to ring until I press stop, ensuring that I am awake.

You might want to look into both OmniBuzz and SleepyMe; they're both free IOS app which seems to provide the functionality you want. I've not personally used either before but I have a friend who gets the train to work at a ridiculous hour every day and raves about OmniBuzz.

From what others have said about SleepyMe; it seems that the app currently only supports audible alarms (i.e. no option for vibration only) which may be a concern if you don't want to irritate other passengers.

There is a very easy solution to this. Set reminders and use location based alert. Set location when you arrive at home. Set time of alert to 6 am or whenever you want. Choose repeat everyday and in principle it should work. Please set sound notification to a more loud tone from Settings>Sound and Haptics. Hope this helps. Good luck! L! 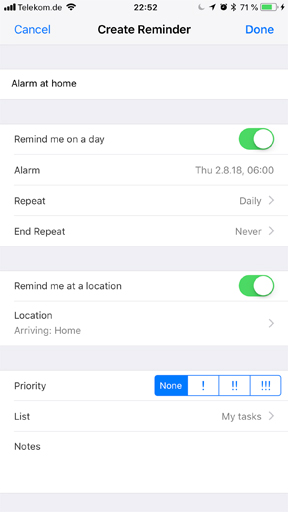 Not the answer you're looking for? Browse other questions tagged ios software-recommendation alarm .

15
How to stop the iPhone from vibrating for just the alarm?
12
iPhone alarm clock sometimes doesn't work
1
How can I set up my iphone to play sounds only when plugged in or an alarm is going off?
2
Is alarm vibration suddenly broken in iOS 7?
1
My iPhone sets alarms for me without my permission
6
Is there a way to set an alarm for sunrise, whenever that may be?
2
How can one easily toggle iOS so that ALL sounds (including alarms) are silenced for a set time period or until the toggle is reversed?