I have an iPhone 6 with iOS 10.3.3 and I am experiencing a strange situation. Whenever I listen to my own music, through the Music app, and the WiFi is on, I have a verification code popup from a remote server. I am almost sure about the reason: the device is trying - through the Internet connection - to update the mp3 tags (artists, covers, etc...) of my collection. I suspect this because:

By the way, it should not happen. The device should update the collection in a silent way, with no two-factor authentication requests from an official server (whenever I close one of them, the next one appears after some seconds). This is quite annoying. Plus, it seems that there's no way to deactivate tags updating when the WiFi is on.

If someone could shed some light it would be great. Thanks. 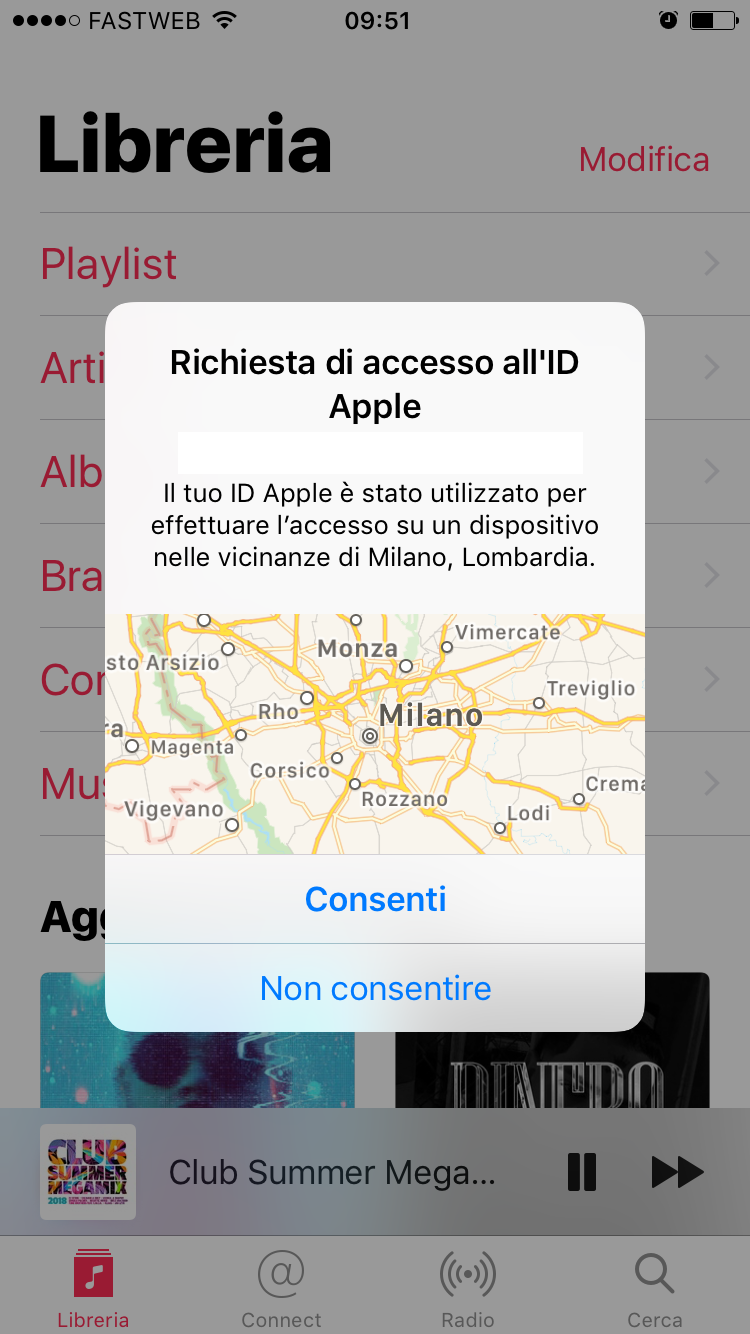 Translation: Your Apple ID is being used for access to a device near Milan, Lombardy

EDIT: Thinking about that more after posting it, I have the feeling that the server in Milan (which should be an official Apple server that updates data on my device) is not "certified" in a certain way, so the iPhone asks for verifying it in a first place. Don't know if it makes sense, It's my first Apple device and I do not know certain logic very well.

I can't say with absolute certainly but the best guess would be that, so long as these requests/confirmations always appear within a few seconds/minutes of you activating the function, that it's simply not accurately logging your location.

I live in London & most times these requests appear to come from an area within 5 miles of where I live.
However, when I visit my relatives in Tenerife, all requests of this type appear to originate in Madrid, some 2000km away.
I've simply got used to the idea that this always happens.

Not the answer you're looking for? Browse other questions tagged iphone music.app .

28
Can I "Forget this Network" when the wifi network is not in range?
1
Itunes Match ... how do I see the music that's been downlaoded to device?
1
How to use iTunes Match with two user accounts on the same computer?
1
Simple way to disable Cellphone (data & call) without disabling WiFi & Bluetooth on iPhone
2
Can I use a hotspot without data to connect to a wifi speaker?
3
iPhone turns off wifi when Lock Screen Active is a bug or a feature?