Help writing AppleScript with Mail rule to keep most recent

I've created a rule to move mail from specified senders to a new mailbox called "News." I'd like my AppleScript to go through the "News" folder and only keep the most recent emaisa from those senders, deleting prior messages. (This is like one of the Sweep functions on MSLive/Outlook.) I've tried writing a script as follows, which is invoked by the rule:

I see that the script is called by the rule, because of the spinning gear on the menu bar, but none of the desired deleting occurs, and the script seems to hang in some kind of loop.

I'm an AppleScript n00b, do much better with JavaScript. I'd appreciate any help.

I don't use Mail.app and haven't much experience implementing Mail actions, so am not in the position to test your script. However, reading through it, there are places in it of potential concern that I would wish to look to first when debugging.

How large is your "News" mailbox ?

There are two features in your script that threaten it to hang or timeout:

If that mailbox has thousands or even hundreds of emails in it, retrieving every message as a list of individually referenced message objects (which is what this statement is doing) could take some time. It's almost always way more efficient and less intensive on processor and memory usage to store a reference to the every message object (collection):

It has another beneficial feature that I'll address later.

Nested loops are a necessary evil sometimes, but the query about the mailbox size is, again, a source of anxiety for me, especially since its called upon in at the heart of the nest where the bulk of the operations are done. This means that, for each new message that triggers the script, every single message in the mailbox has to be checked and compared to the trigger message.

These are two branches of one issue, really, because if your mailbox only has 5 messages in it, none of this is particularly bothersome. Otherwise, you're first getting AppleScript to retrieve every message in the mailbox and store them in a variable; then cycling through this potentially heavy load and comparing each item to another.

If you had no choice but to use a repeat loop whilst knowing that it would have to iterate through a lot of list items (once you exceed about 500 of anything, AppleScript can begin to buckle) it can help, once again, to pass AppleScript a reference to the list of items instead of the actual list. Passing any reference through a script object (which is what a reference to essentially does), is much, much faster than making AppleScript access an object by other means. Here's an excellent explanation and demonstration of these principles.

After addressing the heavy issue above, which could turn out to be of little relevance to your particular case, here are one or two de facto elements that are easily changed to either improve the efficiency of the script, or prevent it throwing an error:

This line is currently declared inside the inner repeat loop, which also happens to be the the meatier of the two, in general hypothetical terms. However, what this is doing is setting the value of the variable eachSender to the same value for as many messages you have in your mailbox. That's a lot of wasted operations for AppleScript (a total of the number of these_messages multplied by the number of EveryMessage).

Instead, move it to here:

Now AppleScript only has to set the variable once for eachMessage in these_message. That's an efficiency improvement of polynomial time down to linear time!

Initially, I thought you were trying to access the EveryMessage object as a reference to the collection I spoke of earlier, and simply didn't realise you couldn't do that in the way you declared EveryMessage.

But, I now realise it was most likely just your hands typing faster than your thoughts, and introducing an irksome typo. EveryMessage here ought to bethis_message, i.e.:

This leads me quite nicely onto my final point, which I hinted at earlier, regarding the other benefit of declaring a variable to an object collection as a reference.

Had you done this:

would be a perfectly valid piece of AppleScript, which allows you to access the property of every single item in a list IFF done so through a reference to that list before any sort of dereferencing has taken place. Once it's dereferenced, list is evaluated into individual object references, and it will no longer give you the means to enumerate through its properties in that manner.

What you get if done correctly is list containing the values of the date received property of every message of the TargetInbox, all through a single line of AppleScript.

Currently, as this wasn't how you implemented it, the declaration for set messageDate will definitely throw an error.

This explains why none of the deletions are occurring, because your script will never successfully reach that part. However, the error would occur immediately, so my feeling is the script isn't even reaching that line either, not even once. Therefore, the problem must originate from a point in the script before it ever successfully enters the inner repeat loop. And you already know my hunch about that.

Now for a potential solution

I'm sorry that I can't actually test my script to verify that this will definitely work first time without any tweaks, so tell me how you get on with this:

As you can see, I've done away completely with the inner most repeat loop thanks to the use of the a reference to operator. As I declared everyMessage in that manner, I am (hopefully) able to enumerate the properties of all the items the list contains in one go, which should be approximately infinity times faster than having to check the property for each item individually.

Many thanks to @CJK for such a thorough response. Your solution works with just one tweak, and I also learned some core concepts for AppleScript. The working script below now executes quite quickly:

The script seemed not to execute without the addition on line 2 of for rule this_rule and I surmise it is necessary in order to pass the these_messages object which is the result of the filtering defined in the parent mail.app rule which is invoking the script.

(At the end of the repeat loop, I changed sender to reply to to handle instances where the sender had changed their self-identifier string on the sending account even though the actual address remained the same, causing the script to miss older emails from the same address.)

I've run into a couple of more issues implementing this script. 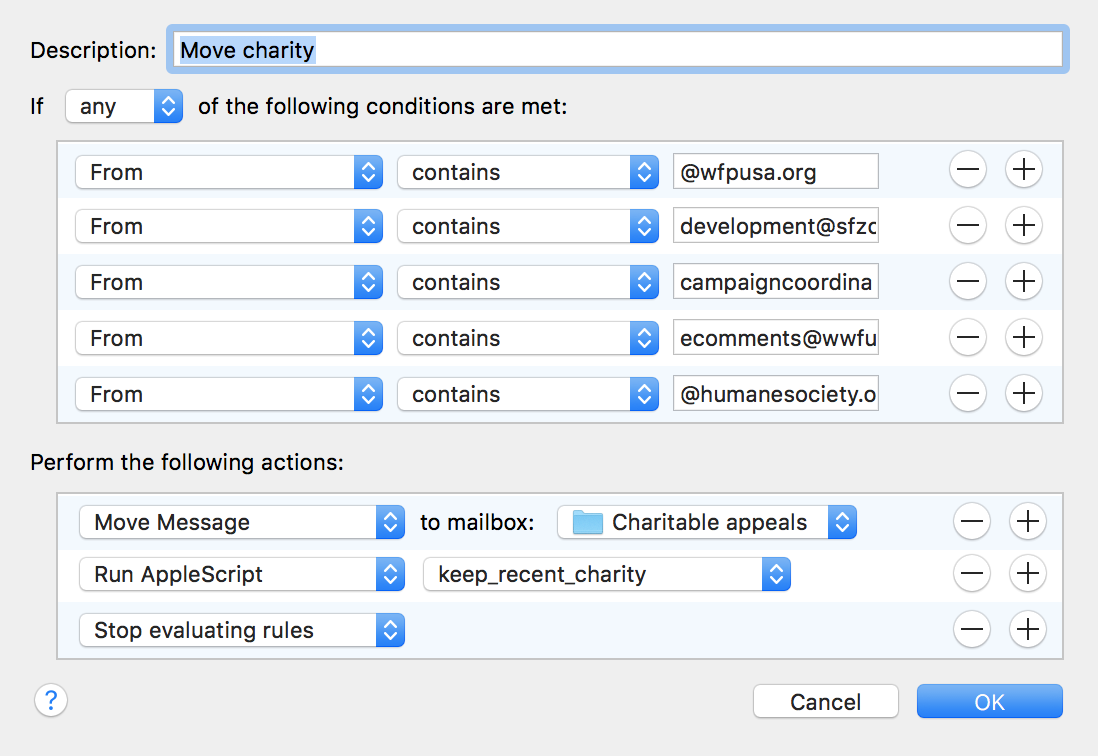 So now my rule only executes my script on the appropriate incoming messages. The problem now is that, if I Apply Rules manually to a message from mail.app's menu, the script executes as expected, but when the rule runs automatically on incoming messages, mail.app hangs, is not responding, I have to force quit and restart, sometimes first disabling the script. I thought it might be because there were over 100 messages in the target mailbox, but then I cleaned them up to only have ~50 messages, and hanging persists.

I would greatly appreciate any help, from @CJK or anyone!

Not the answer you're looking for? Browse other questions tagged applescript mail.app email mail-rules .

0
Address smart group based on mailbox? Or Tags?
1
Forward or redirect email with attachments using Apple Mail to another email address
1
macOS Mail app rules to delete are archiving instead
1
How to debug an AppleScript intended to be run by a Mail rule?