I own a MacBook Pro Mid 2010 13" that has been running fine up until now and it has already survived 2-3 minor falls off a table but after the last one every time I apply only slight pressure on the back (more or less around the letter p on the keyboard), for example when I pick it up to carry it around, it crashes. Sometimes the screen freezes (can be in different colors) and then restarts (showing the message "you need to restart your computer. hold down the power button..."), sometimes it just freezes without showing this message and it has also been freezing and then making a beep tone and repeating it with a few seconds pause in between. Also, sometimes when I open the MacBook it doesn't "wake up" and I have to force it to shut down before I can start it again. Sometimes those problems also happen if I have a lot of programs running or if I have a lot of tabs open in Safari and sometimes during the freezing or the moment before the fan runs on full speed.

I've made the following modifications to my MacBook: - I've changed the RAM from the original 4GB to 8GB (already a few years ago) - I've gotten rid of the optical drive and I now have to SSD's installed (also longer than a year ago)

I've never had problems after those modifications so the crashes have to be because of the last fall. I've already checked all the connections on the logic board (drives, screen, RAM, battery) but they seem to be ok.

Today I started the MacBook without the bottom case to try to check exactly where the pressure has to be applied so that it freezes. I used a plastic spudger to apply some slight pressure on different parts of the logic board and found that it only freezes when pressure is applied on the two marked parts on the picture attached. (I know that pressing around on the logic board of a running MacBook is probably not the best thing to do but know at least I know exactly where the problematic parts are and well it still seems to work)

What exactly are those to parts for? And what could be the problem here? A lose connection? Is the only fix to change the logic board? 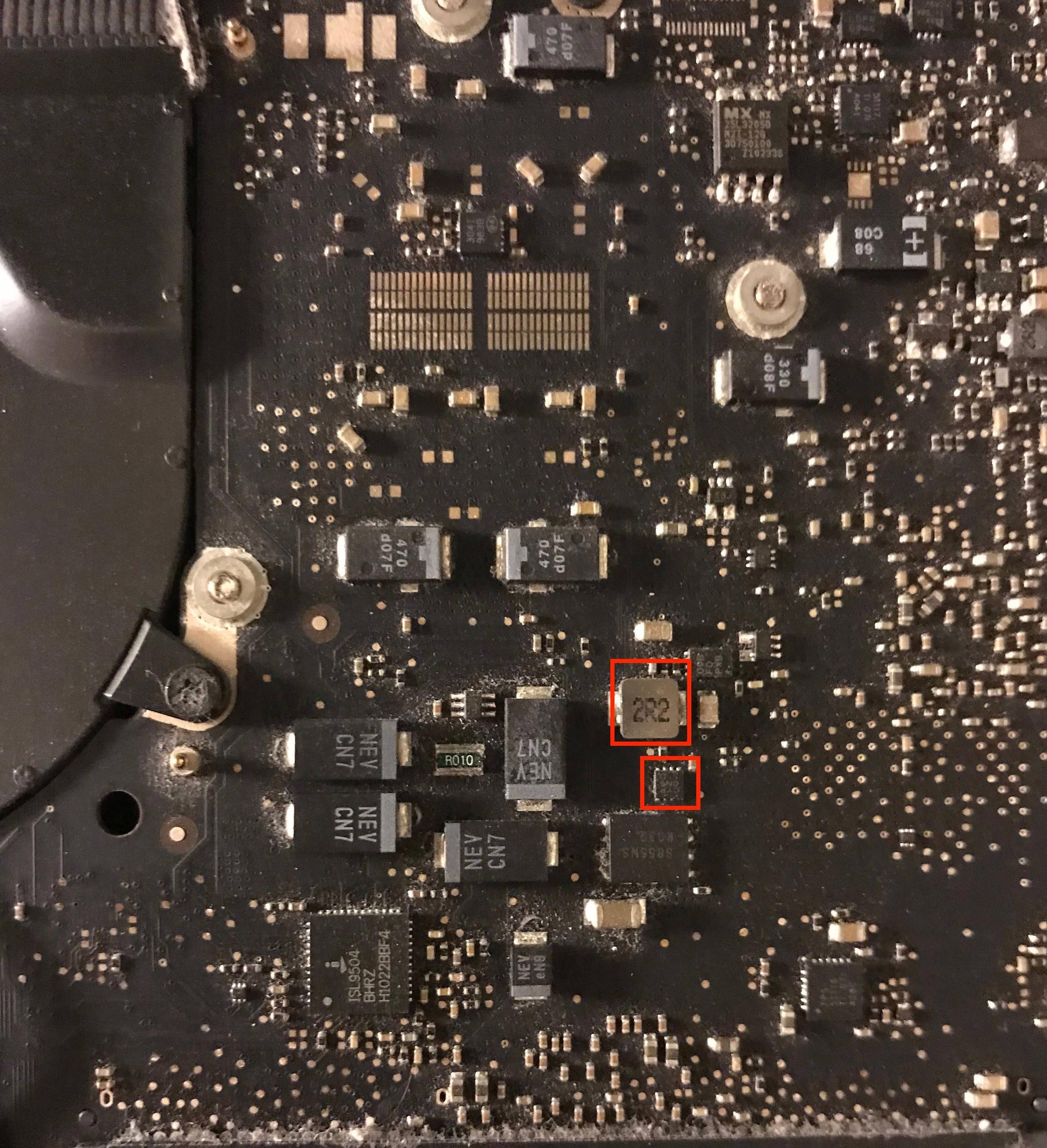 I used to repair these computers, but I'm not up-to-date with service options. My answer assumed that the computer hasn't been repaired before.

tl;dr: I suggest visiting an Apple Store or an Apple Service Provider and asking for a new top case, bottom case, and logic board.

The second issue sounds like a kernel panic. That might be a software issue, but more often than not, it's a logic board hardware issue in these Mid-2010 MacBook Pros. There used to be a quality program (or replacement program) for the logic board's video issues, but it has ended. So, odds are, you're overdue for a replacement logic board. But eight years is pretty good for a computer that has survived falls and third-party modifications.

However, replacing the logic board might not resolve the first issue. It sounds like there is something shorting out the logic board, which causes the computer to restart. The "something" might be a dent in the top case (the top part of the computer containing the keyboard, power button, and trackpad) or the bottom case (the bottom part screwed into the top case) making contact with the board. I've seen cases like this before where the customer kept coming back for the logic board every time, when it was a dented bottom case all along.

In any case, you definitely do need a new logic board if any part of it is damaged. A service technician might be able to offer a more definitive answer. I don't think it's very expensive to get these computers repaired at an Apple Store (it's at least cheaper than a new computer), and I don't think that Apple Stores care very much about third-party modifications.

It sounds as if the fall has caused a poor connection, a crack in a circuit board or an intermittent short circuit.

It's possible that the poor connection involves one of the two components you've identified and in that case, a skilled service technician might be able to resolder them. However, it's equally possible that the fault is elsewhere and it just happens that pressing at that point causes the board to flex in such a way that it triggers the fault.

If you really want to avoid replacing the machine I would try and find a reputable independent repairer and ask them to quote for the repair, but be prepared for it to cost more than it's worth (and make sure you know what if anything they will charge you just for finding out).

However you would probably be best off to sell this machine 'for parts', and replace it with a newer model. If you're on a budget and you want to keep at least one of the SSD's, I suggest looking for a mid-2012 non-Retina model (MD101LL/A) as this is the last MacBook that used a 2.5-inch HDD and this model was still on sale until 2016, so should be supported by OS upgrades for a couple more years yet.

Not the answer you're looking for? Browse other questions tagged hardware crash .

0
Can different CPU on logic boards from the same overall A1369 MacBook Air work?
0
Battery charge suddenly drops to 0% even when plugged into mains (Mid 2009 15″ MacBook Pro)
2
WindowServer crashes
0
Powering off/crashing during startup MacBook Pro mid 2009
0
Is there any way to expedite a MBP 2011 discrete GPU failure
1
Transplanting MacBook Air 11" logic board to a 13" one
1
Macbook Pro 2010 crashes after waking up and usually when launching a Google Search in Chrome
6
MacBook Pro 15" mid 2015 retina randomly freezing, trying to pinpoint the issue (not sleep related)