I've been using Time Machine with my MacBook Pro without issues for some time, however, I’m now having a problem that I haven’t had before: when connecting the external hard drive on which backups are stored, the “Preparing Backup” stage takes an inordinately long time, and when the actual backup starts, it proceeds really slowly (a couple of MB every minute or so) and then it completely stops. I don’t get an error code. This has happened with both Time Machine backup external hard disks that I use.

Could this problem be related to the fact that I’m using two external hard disks for Time Machine backups? I’ve only run backups on two hdd once before.

Any thoughts why this might be happening and how to resolve the issue? I’m running High Sierra on a early 2015 MacBook Pro (upgraded from Yosemite). The two external hdds are formatted as HFS+. I've also swapped usb cables to make sure it's not a faulty cable causing the issue, but the same thing happens.

I've just dealt with a similar issue, and hope I can help someone. I did a completely clean install of High Sierra, then Time Machine stopped working after four days.

Your error message indicates that this is a problem with the drive you're backing up, or perhaps Time Machine's index of it.

Here are the steps to take: 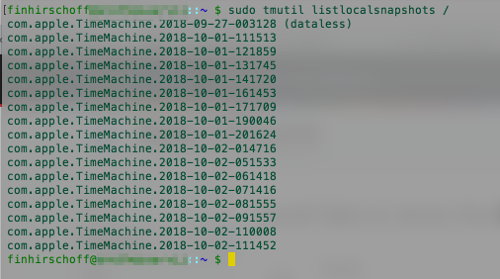 My problem was that it mysteriously wouldn't copy files.

For a week, no matter what I did, the same thing would happen - Time Machine would start, go very slowly, and then stop and give me this message:

It wouldn't complete an initial backup even. I had reformatted over and over (as HFS+ Journaled), deleted local snapshots, tried repairing the backup drive and the system drive.

The infuriating fix to my problem was simply to remove my encrypted APFS volume. fsck/First Aid kept returning a problem with the container and system volumes - "mount apfs exit status 73" and "System check exit code is 78." All that was happening was that it couldn't mount the encrypted volume. After I deleted that, I was finally able to fix Time Machine.

I still had trouble though, even after zeroing out the first 300MB of the backup drive to totally nuke the partition map and EFI. Eventually I formatted it as exFAT, let Time Machine format it, which it failed to do: 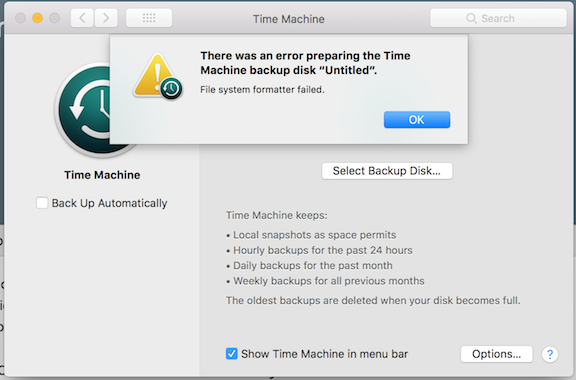 And then I went back to Disk Utility and formatted it as HFS+ Journaled Case Sensitive. That's when it started working.