Can This Mac Pro Be Restored To Original State

I got this free from a friend with no HDD therefore no OS. I purchased Snow Leopard from Apple Store near me along with a cheap HDD for a restore. I placed the new HDD into my own 2008 mac pro and formatted the drive GUID mac os journaled for fresh install on older model.

Placed new HDD in '06 along with Snow Leopard booted to chime held in C until the disc started to read, waited a few more seconds released C and left it.

The drive spun on and off for 15-20 so I started pressing the space bar, tab and enter at various times until it sounded like it was installing which it must have done because after an hour or so the welcome video played. I could hear it but no picture just like the full install period.

Thinking it was the video card I purchased the Nvidia 120 512mb waited on delivery and installed on my '08 first and it worked so pulled it and installed in '06 hit power and nothing for a few minutes then the welcome video sounds again.

Repeated what I had done in the first install instance with the new card but the same thing occurred no picture at end of install just sound.

I have tried every start up option/ key press solution I could find to no avail.

I then came across hackintosh and found a boot disc that allows me to boot the hdd and when it loads the welcome video is visible but no sound. Upon opening 'About This Mac' it's apparent that the boot rom has changed as well as the Mac Version and as noob as I am I know it's not right.

The computer will strangely enough accept any x86 windows disc with full video from beginning to end of install, but I would prefer it mac.

Now I don't know how much of this is fact but I recall an article were a mac running dual boot OS X and windows with a VM on the windows side had somehow managed to completely scrub the first HDD containing the mac partition rendering it unable to boot mac os again. 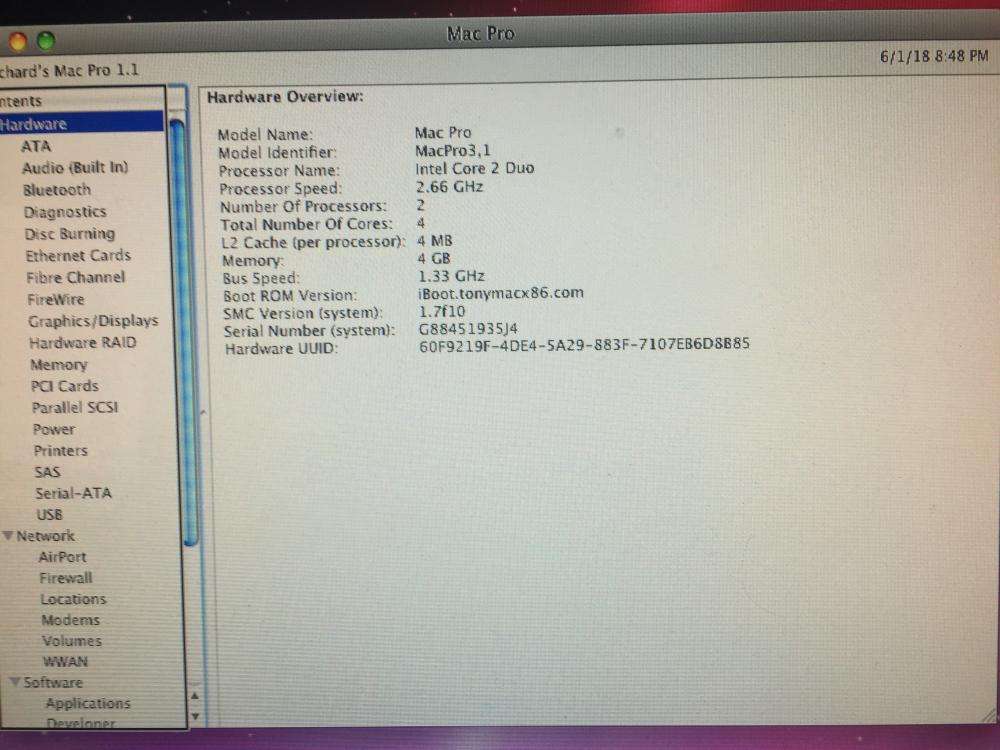 There are several disturbing things from your screenshot I want to explain to you. My answer is no direct answer to your problem, but in the end could help you, if you are willing to do some hardware modifications.

I just want to summarize your hardware description first and put my 5c to it.

What you can do to have fun again with that box:

I currently need to suppress the urge to book the next flight to you, fixing that good old manually sickened MacPro. :-)

Not the answer you're looking for? Browse other questions tagged mac-pro hackintosh .