While I was working, I didn't realize that the battery was low and as a result, my MacBook Pro shut down when the battery had no power. So, then I plugged in the charger and powered it on. This time I noticed something was strange. The battery was stuck in 0% for like around 10 minutes and the date got reset to 1st January 2017. I tried resetting NVRAM. Nothing happened. So, then I ran diagnostics and I got this as a result: 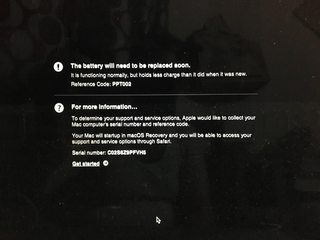 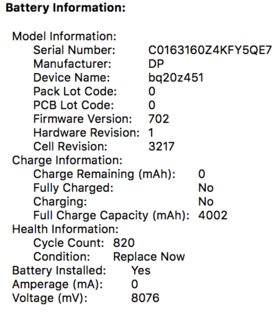 Here's a screenshot from Battery Health:

Now it is pretty obvious that you might ask me to change the battery because the screenshots say so, but I want a final opinion from you guys what to do next. Everything was working fine and all of a sudden this happens. I feel if I plugged the charger in time, I wouldn't have to see all this. And also a new battery isn't exactly affordable for me at the moment. And it is also important to note that while the charger is on, it shows orange LED. So, what should I do?

Your battery is dead.

You need to replace the battery. Granted, it's a bit young at just under two years and 820 cycles, but it's not uncommon nor unheard of. Unfortunately, batteries die for any number of factors.

With your specific battery, it appears that it won't take a charge, thus it cannot hold one.

Everything was working fine and all of a sudden this happens. I feel if I plugged the charger in time, I wouldn't have to see all this.

There are a number of factors that contribute to premature battery death - it could have been defective from the factory or you could have subjected it to extreme conditions. Perhaps something in between. The point is, it happens. There is nothing you could have done to prevent your battery from degrading.

...also a new battery isn't exactly affordable for me at the moment. And it is also important to note that while the charger is on, it shows orange LED. So, what should I do?

First off, the orange LED means it's sending voltage to the charging circuit or "charging" for short. It doesn't mean it's "successfully charging" the battery.

Getting an Apple Store to change out your battery will be very expensive (minimum $500). However, a replacement battery alone is fairly inexpensive (around $70 USD) if you are willing to change it out yourself. ifixit.com has an excellent step-by-step guide to walk you through it. They rank it as difficult, not because it's complex (it actually quite simple) but because the battery is glued in and you have to be careful.

I saw your battery is already very close to dead with 4000mAh max capacity (the 100% healthy battery has 6500mAh). So everything could happen. You need to replace it. I'm not sure how it died so fast... Actually I bought the same model on 2016 spring and keep using it everyday until today (heavy use) and it still has 5700mAh.

Not the answer you're looking for? Browse other questions tagged macbook-pro hardware battery charging power .

1
Macbook Pro Battery Condition: Replace Now
8
Mid 2012 MBP shuts down claiming no power with charge at 30% or 40% or more
6
When apple replaces the battery in a 15" MBP retina, do they replace the entire top portion of the case?
2
How to preserve MacbookPro battery from degradation?
1
Mac runs as long as plugged in, but unpredictably shuts off otherwise - clock resets
1
Mac Battery malfunctioning in just 2 years

1
Trying to restart a MacBook Pro that went off by itself with a battery that indicated “Service Battery”?
0
2011 13" Macbook Pro shows a green charging light but battery was draining and now it won't respond to SMC Reset
3
MacBook Pro early 2015 not turning on and not charging
3
Late 2008 13" MacBook not detecting brand new battery
2
Macbook pro 13" mid-2012 not turning on, no battery leds (battery ok)
0
MacBook Pro will only charge if using a 3rd party adapter after battery replacement